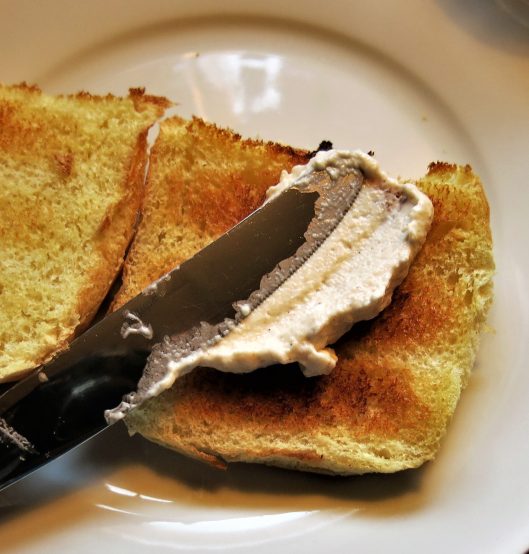 The other day is was lunching at a local restaurant, and their daily special was a pork schnitzel sandwich, topped with their applesauce aïoli.  It was really quite a lovely combination, so I decided it was time to explore the rich deliciousness, that is an aïoli.  And then there’s the alliteration thing, Applesauce-Allspice Aïoli.  What can I say? Now, I will tell you that this was lovely with schnitzel, but all I kept think was how good this would be as a dip for sweet potato fries or wedges.  But, that’s another day….

This is incredibly easy…I mean stupid easy.  Which is a good thing for me.  However, you do need to plan a bit ahead,

as my purchased applesauce was too runny, so I drained it for about 10 hours.  Actually, it sort of slipped my mind, but I’m glad it did,

because it was nice and thick.  If you want this to be completely smooth, then toss everything into the blender.

I thought it was smooth enough, as is.  I really like the allspice as the front-flavored spice.  The cinnamon is there, but subtle.  Very subtle.  When you’re ready to prepare your aïoli,

just put everything in a bowl (or a glass measuring cup), whisk it up until it’s nicely combined, scrape into a container and chill.  Let it chill for at least a couple of hours.  This isn’t a sweet spread, so if you want to add sweetness, add a drizzle of honey or maple syrup. 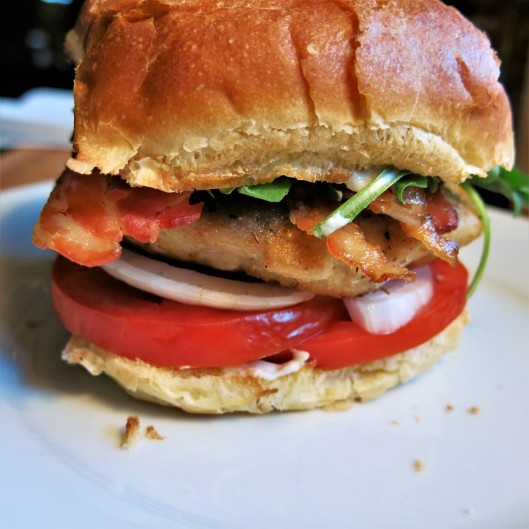 I made sandwiches for The Latin Lover and I for dinner.  We always enjoy sandwiches.  I’ll put almost anything between two pieces of good bread.  A sandwich is just so delicious.  Anyway, I pan-fried some pork cutlets, but without the usual breading one finds on a pork schnitzel.  For a sandwich, I prefer less breading, because after all, we’re putting this between two slices of bread anyway, right?  Anyway, I put a good schmear of the aïoli on both sides of the bun.

Top with thin slices of tomatoes, onion, some sprigs of arugula, the cutlet and some bacon strips.  It was much lighter than the more traditional breaded pork cutlet.  I thought about putting some Dijon mustard on the sandwich, but I thought it would muddy the flavor too much.  But, if you want to add mustard, by all means, do.

By the by, if you haven’t tried arugula on a sandwich, instead of a more substantial lettuce, then you really should try it.  It is a nice option and it makes the sandwich less likely to slide around and be more difficult to eat.  Plus it just has a better flavor, but admittedly I am a fan.  But, not on pizza…no.

At least 10 hours before you plan to make before you plan on making the aïoli, (the day before is even better), plop the applesauce in a fine mesh strainer and place over a bowl.  Cover and chill until the mixture drains; you’ll need about 1/2 cup of drained applesauce.  It will be thick; the thicker the better.

This aïoli keeps wonderfully well.  I think it might even be tastier after a few days.  I did a nuke-pan-fry of sweet potatoes (we’ll talk about this method another time, okay?) and served them with some of our Applesauce-Allspice Aïoli.  Yeah.