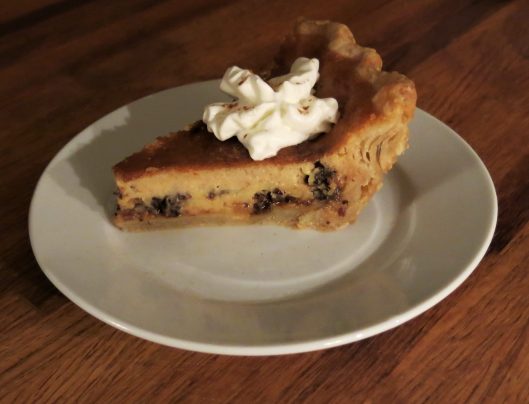 My mother came from a long line of damn fine cooks.  Some cooked meat well, others were bakers.  I always think of Aunt Mary as a baker.  Though I suspect she could make a mean pot roast.  She made this pie.  It was her little bit of heaven, and it is a culinary delight to behold.  My mother made a custard-based raisin pie, that my father was particularly fond of, but that didn’t have a sour cream base.  I’ve mentioned that I’ve been going through my mother’s recipe box, but this wasn’t in there.  Aunt Mary’s Sugar Cookies, Aunt Mary’s Applesauce Cookies and the wonderful potluck favorite, Aunt Mary’s Bean and Burger Casserole are in there.  But, no raisin pie.  What put me onto this was a conversation with my cousin, who was raving about this pie.  Graciously, she emailed the recipe and I made it.  I’m not a huge fan of raisins.  But, damn!  She was right. The flavor is sweet with a bit of tang at the back, which doesn’t really tell you much, does it?  But, it is exceptional.  There is a light cheesecake-like quality to the filling, but the flavor is where it shines.  Now, I made it the first time, by the recipe.  After the shock of that info wears off, continue reading….

A good crust is essential, and I’m using the Pie Crust Perfection!  And given that I followed the recipe first time, I decided to make a couple of minor changes.  I omitted the flour and added an additional egg yolk.  The consistency of the filling was different.  It was creamier and more flan-like.  I’m not absolutely certain which I preferred, but I’m leaning toward the extra egg yolk option.  Either way, the flavor was still incredible.  Given the time of year, I opted to use part raisins and part dried cranberries.  My rationale for this change was, I was serving this to my cousin.  And I can never, ever, ever make it to taste the way she remembers her mother’s tasted.  Our food-related memories are diabolical, because they usually aren’t as accurate as we remember…memory is funny that way.  So why try to compete?  The addition of cranberries will still be delicious, but she knows it won’t taste the same from the get-go. 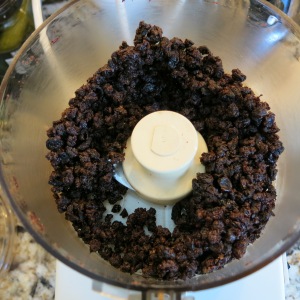 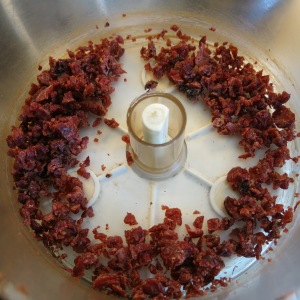 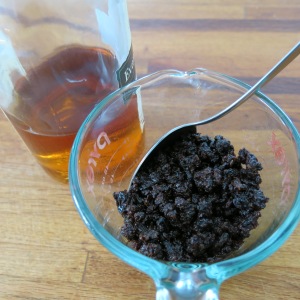 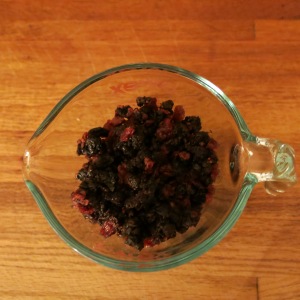 I ground the raisins and cranberries in the food processor, and I then soaked the fruit in bourbon.  Why would you use water, when bourbon will just be better?  If there’s any of the soaking liquid left, add that to the filling, too.  This is rich and delicious, but relatively easy to put together.   But, you need to plan ahead just a bit.

I think it’s best to stir the cider vinegar into the sour cream the night before, cover it loosely and let it stand on the counter overnight.  It will be thicker and that’s a good thing.  Actually, I let it stand in the fridge for three days, removing the watery whey each day.  The less water, the thicker the sour cream, right?  And thick sour cream is a good thing.  A. Very. Good. Thing. 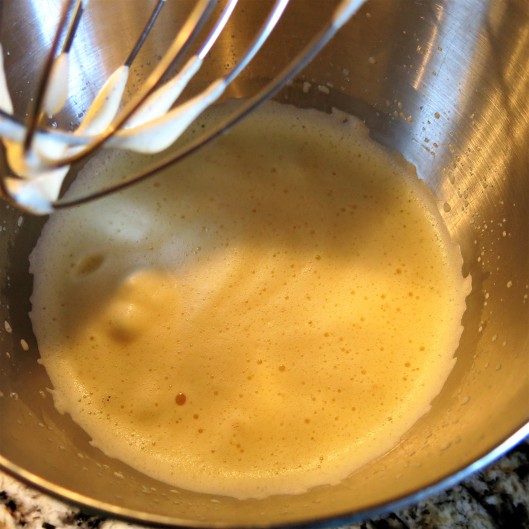 Beat the eggs until light and fluffy and slowly add half the sugar.  This helps stabilize the mixture. 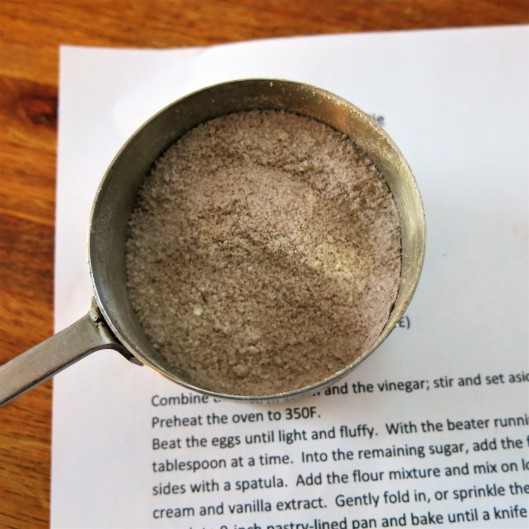 The flour and spices are stirred into the other half of the sugar, which is sprinkled over the beaten eggs and gently beaten in on low. 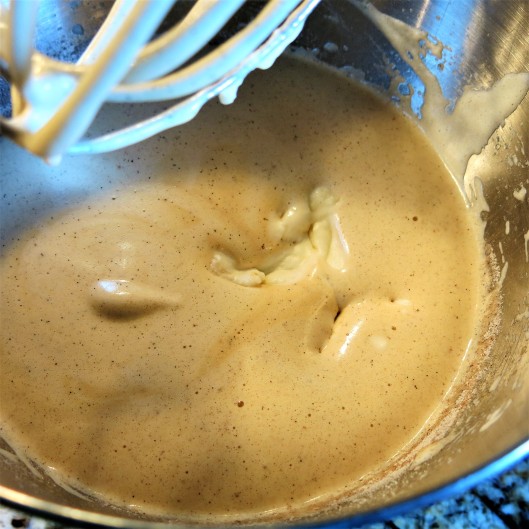 Add the sour cream, vanilla and any soaking liquid and ever so gently stir into the eggs. 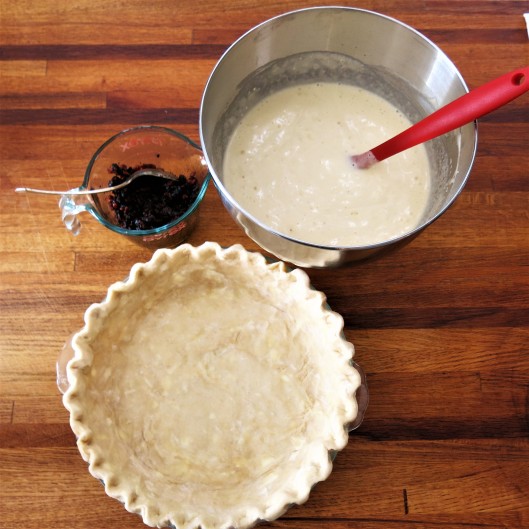 Now, you can fold the raisins into the filling OR 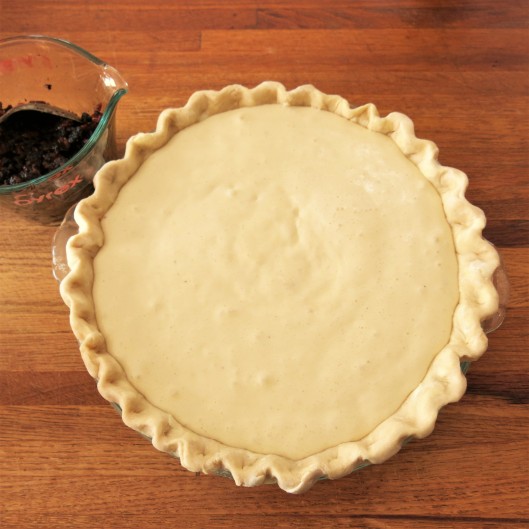 you can pour the filling into the pie shell and 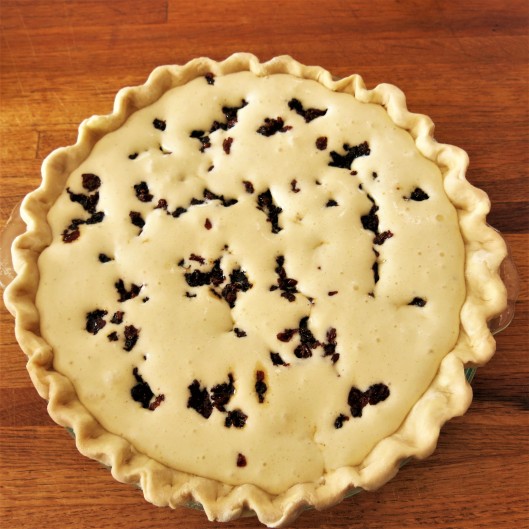 then sprinkle the raisins over the top, which is what I did.  They will sink. 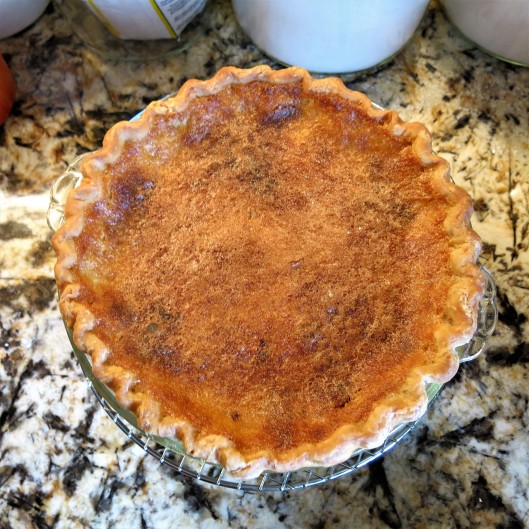 Bake about an hour or until the center is almost set.  The top will become nice and brown relatively quickly.  But, I didn’t feel the need to place foil loosely on top.  It was fine.  Cool completely before serving.  I have mixed feeling about the serving temperature, but I lean toward slightly chilled, as opposed to room temperature.  Do not try to serve this warm.  It won’t cut properly and the flavor isn’t as good.  The bonus with this is, you can make it early in the day, chill it and then remove it from the fridge about an hour before you plan to serve it.  I like to put a dollop of whipped cream and a mere kiss of ground cinnamon on top.  Yeah.  I know.  Whipped cream seems a bit over the top, but it actually seems to “cut” some of the richness.

So, my next adventure is going to be subbing dried cherries and cranberries for the raisins and soaking them in either Port wine or brandy…I’ll let you know….

Combine the heavy cream and the vinegar; stir and set aside for at least 1 hour, but overnight is best (or 2-3 days, covered and in the fridge).

Beat the eggs until light and fluffy.  With the beater running, slowly add the half the sugar, a tablespoon at a time.  For the remaining sugar, stir in the flour, salt and spices until well mixed.  Scrape down the sides of the beater bowl with a spatula.  Sprinkle the flour mixture over the beaten eggs; mix on low for 30 seconds. Fold in the sour cream, vanilla extract and any soaking liquid left from the raisins.  Gently fold in, (or sprinkle) the coarsely ground raisins over the filling.  Pour into 9-inch pastry-lined pan and bake until a knife comes out almost clean, about 50-60 min.

OPTION:  Omit the flour and add an extra egg yolk with the whole eggs; continue with the recipe.  The consistency will be more flan-like.

NOTE:  I like to combine the heavy cream and vinegar and let stand on the counter overnight.  It will more than likely separate.  I remove the watery part and leave the thickened cream behind.  Aunt Mary ground her raisins in an old-fashioned grinder, but I use the food processor.  To soak the raisins, I prefer to use bourbon (brandy or rum are good, as well).  For a slightly different, more holiday flavor, I substitute one-half dried cranberries, for an equal amount of raisins.