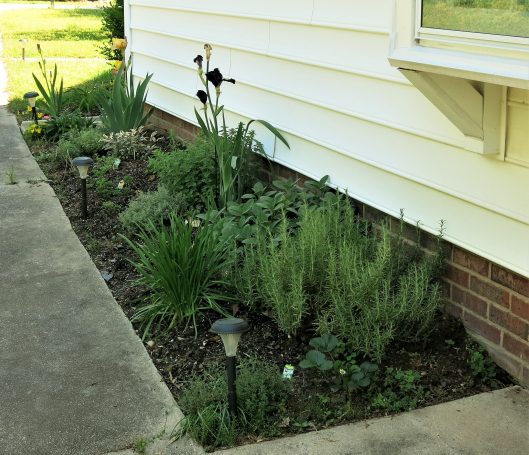 Spring is here…at least it’s here in The Goddess’s realm of being.  And of course, it is all about The Goddess!  If spring hasn’t arrived, there are, as they say, the “harbingers of spring”…daffodils, new green growth peeking through the soil, and lovely, sunny, cool days.  Spring and fall are my times of the year.  Maybe it’s the change from the frigid chill and the searing heat, but each of these seasons seem to be so much more welcoming than either winter or summer.  The garden is coming to life, the bluebirds are mating

(this one doesn’t understand the concept of reflection and keeps flying at our kitchen window.  All. Day. Long!) and it’s time to talk about the herb garden, specifically.   For me, the essentials are, thyme (I grow several types), French tarragon, rosemary, sage (I grow a couple of types), Greek oregano and basil.  That’s more or less in order of importance…this is for me…it may not be so for the way you cook…so choices, folks!  All of these dry well, too.

Before we get into to that, I’d like to introduce you to our bay leaf “tree”.  I bought this when we first moved to Connecticut.  I kept it in a large pot, took it out every summer and brought it in every winter.  I would live in the basement, under lights for 12 hours everyday.  It lived, but when spring would come around, suddenly there would be a heap of new growth.  I carried it with me to Miami, when we moved there and then brought it here with use.  Here, it lives outside all year long (Miami, as well).  When I repotted it the last time, I discovered that I actually have TWO trees…well actually they are more shrub-like.  So, I putting one in the ground and leaving one in a large pot.  We’ll see what happens…. 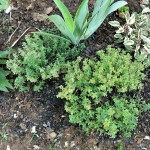 This herb has been an acquired taste for me, and there are quite a number of varieties.  Now, I use it almost everyday.  I throw a sprig or two (to be removed later) in soups, the cavity of a roasting chicken, or a skillet of mixed vegetables I’m roasting.  I grow three varieties.  I’m particularly fond of lemon thyme.  It offers the flavor of thyme, but with the bonus of a subtle hint of lemon.  German (or Silver) Thyme and Common Thyme have a more pronounced flavor.  They over winter here, as well as in northern climes.  Thyme is works well with almost everything, but particularly with fish and fowl.  Lemon and thyme compliment each other in both savory or sweet dishes. 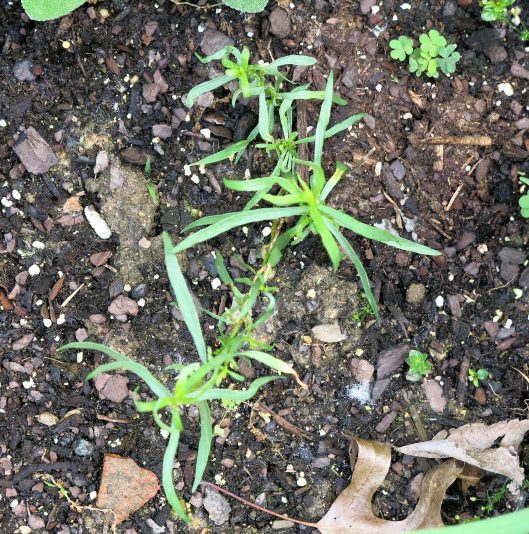 This is a favorite of mine.  I love the subtle licorice flavor, but there’s a sweet earthiness present, as well.  When purchasing a plant, and you can only grow true French tarragon from cutting, not from seed.  Always, always, always purchase tarragon from a reputable nursery.  What is normally sold in garden centers is not French, but Russian tarragon, and it isn’t the same, at all.  Once established, tarragon thrives.  It tends to like less heavy soils, though.  Tarragon is essential to a Bearnaise sauce.  It, like time, compliments lemon and is excellent with chicken, fish, in cream soups and sauces, added to vinegar, with eggs and potatoes.  It dries well; it is one of the herbs in the blend fines herbes. 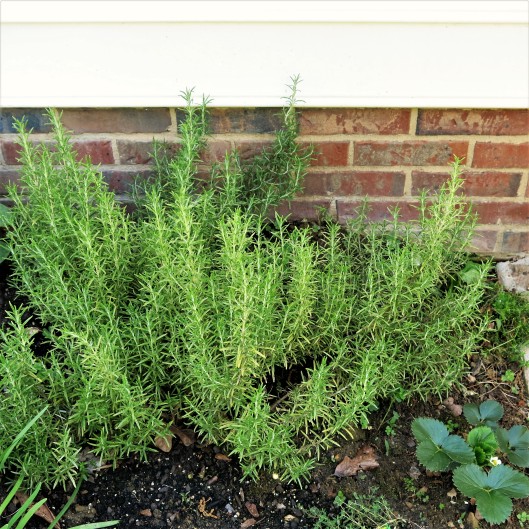 There are several different types, but I grown just the Common Rosemary.  Here, in North Carolina, is can be left in the ground and is therefore, truly perennial…it’s actually a shrub.  In Connecticut, I treated it like an annual.  I tried to over-winter it inside, in a pot but it never survived…Rosemary is excellent with pork, chicken, lamb, breads, roasted potatoes and roasted vegetables, in general.  It has a very strong flavor, so take that into consideration when you using it.

This is a “substantial” herb.  The leaves are velvety and when using, a little goes a long way.  It grows well and easily.  It spreads, but is manageable to keep in check.  I grow the Garden Sage, but I also plant a Tricolor Common Sage…there a many different members of the sage family, including a pineapple sage that isn’t used for culinary purposes, but has a lovely red blossom.  Sage is typically used with poultry and pork.  IT is commonly used with legumes, tomato-based sauces, breads, pasta dishes and with cheese.  It is an essential ingredient in the blend, poultry seasoning.  The leaves are sometimes deep-fried as a garnish.  And it dries well.

I always have oregano in the garden, but I must admit, I usually use this dried.  I suspect it’s just habit, as it is lovely in Damn Fine Bolognese Sauce, where I use both fresh and dried.  Oregano is used on pizza, in many Italian recipes (depending on the region), as well as Greek, Middle Eastern and Mexican (Mexican oregano tastes different, but is rather nice to have on hand) foods.  I think the flavor of Greek Oregano is more interesting, but you should decide for yourself.  Oregano is good with chicken, pork, lamb, eggplant and tomato dishes, green beans, pasta sauces and it pairs well with basil.  It is one of the herbs in the classic Italian Herb Blend.  It dries very well. 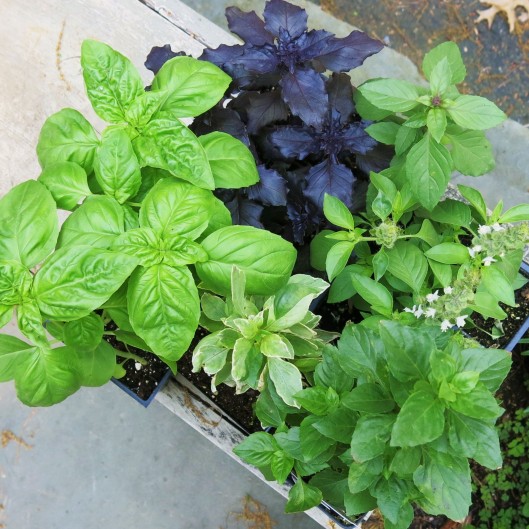 I do love fresh basil.  I like to grow several different varieties, for both color and flavor.  The sky really is the culinary limit with basil.  In the heat of summer, basil thrives.  It is absolutely delicious with fresh garden tomatoes and fresh mozzarella cheese.  Tear the leaves into dime-sized pieces (along with a few mint leaves) and add to a leafy, green salad, adding a brightness to the salad.  Basil is the quintessential herbs for pesto, though you can make pesto from almost any green/herb.  Serious Eats has a primer on making pesto…take a look.  Basil is a major part of Italian flavor profile (depending on the region).  It is excellent with fish, chicken, pasta, cheese, bread, eggplant, zucchini, green beans, soups…okay the list goes on and on.  Basil is also excellent with strawberries and raspberries.  It dries fairly well, and freezes well.  It too, is part of the classic Italian Herb Blend.

I just want to mention a couple of other herbs here. 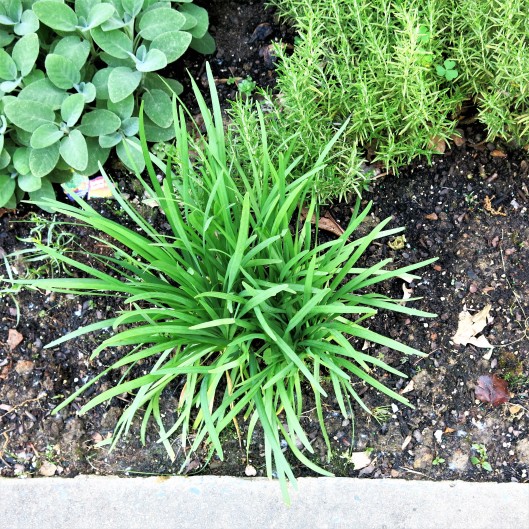 I use chives a lot.  They are for more than just garnish.  I prefer the garlic chives, as they don’t send up flowers quite as readily as Common Chives.  The added bonus with garlic chives, is an everso subtle garlicky flavor (go figure!).  I add them to rice, salads-particularly potato and pasta, vinaigrettes, cream sauces and soups…really pretty much anything, plus I use them for garnish, too. 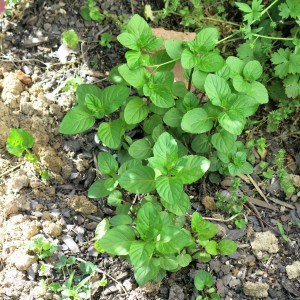 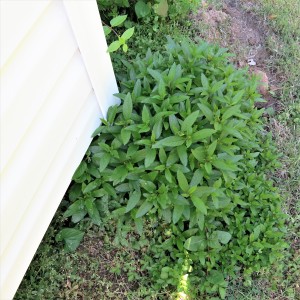 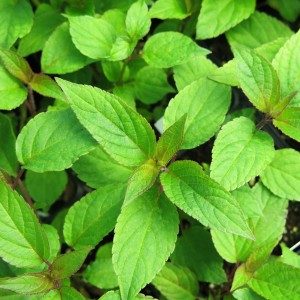 there are many, many varieties of mint.  I like to always have orange mint and peppermint in an out-of-the-way corner of the garden.  It spreads like crazy, so be prepared to contain it.  Though, it can be grown very well in a pot.  I much prefer mint fresh and use a very light hand when cooking with mint…a little does indeed go a long, long way.  As I mentioned, I do like to add it to tossed salads, as well as to cucumber salads.  I make a mint chimichurri for lamb, both as a marinade and a sauce.

Lemon Balm, Reseeded and Growing under the Deck!

I also always have some lemon balm in my garden.  It is a member of the mint family, but less invasive and quite delicious.  I bruise a few leaves to add to lemonade or iced tea.  I add some leaves to tossed salads, marinades, Buttermilk-Cheese Herb Bread, with fish and chicken, as well as roasted vegetables, and green beans.  It makes a decent pesto, too.  It dries okay, but is just so much better fresh.  It reseeds itself readily; these plants are growing under my deck where they reseeded themselves from some I was growing in a pot on the deck.  It is very hardy. 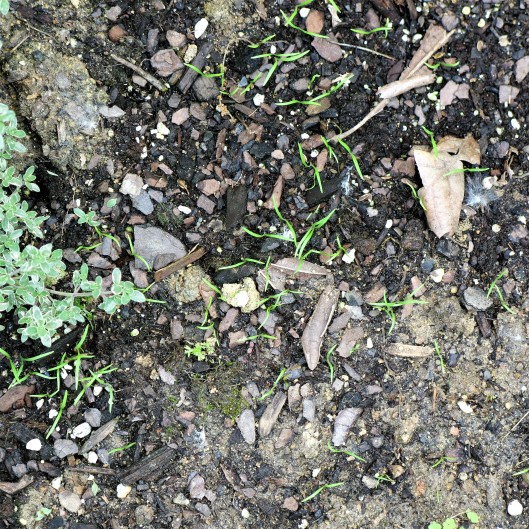 I’ve planted some dillweed, as well…it’s just broken ground, but there will be plenty.  This is a cool weather plant, in general, but this is a slow-bolting variety.

Let’s talk about fresh vs. dried herbs for a moment.  Some herbs dry better than others, as I mentioned.  Cilantro does not dry well.  It can be frozen, but is still best fresh.  Dried herbs are added to dishes at least 10 minutes before the end of cooking.  They need to reconstitute.  I usually had part of the dry herbs at the beginning of cooking and the rest nearer the end.  Fresh herbs should be added at the very end of the cooking process.  Their oils a active and volatile.  If your can smell the aroma of the herbs wafting through your kitchen, all the flavor isn’t going into the dish.  Use dry herbs in a ratio of 1:3 with fresh herbs.  In other words, if your recipe calls for 1 tablespoon fresh basil, you will use 1 teaspoon of dried…and vice versa. 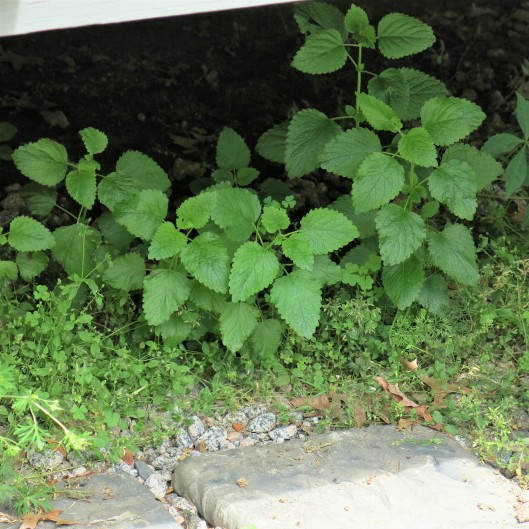 the lemon balm, which is under the deck and 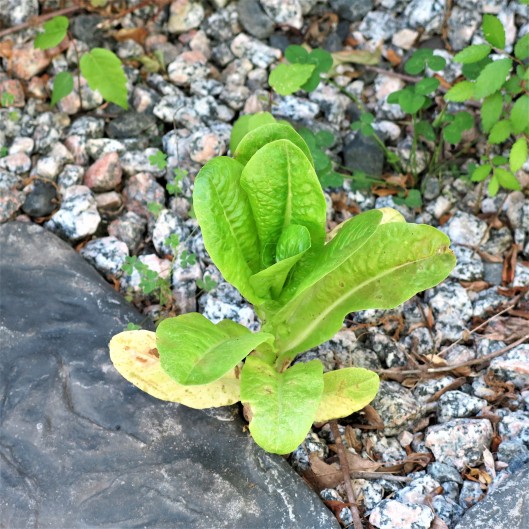 this lettuce…actually there are 6 of them, and they are delicious.  Occasionally, The Goddess tries something new…this time it’s 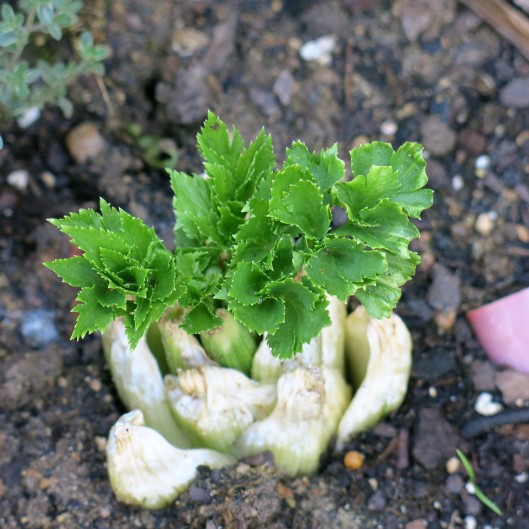 Celery growing for a discarded base.

planting the base of a stalk of celery, that she usually pitches.  A while back, she read that you could plant it and a new plant would grow.  I planted this about 10 days ago and look at that!  I suspect it will mostly be leaves, but I’m great with that.  I love celery leaves.  They are more delicate and can be added to a salad, chopped up in soups and potato salad…’tis the season.  She added

marjoram and something called “Mexican Tarragon”, which she has no idea about.

5 thoughts on “Spring Has Sprung!”