Today we visit Loulé and Almancil, which is really part of Loulé.  A suburb, if you will.  And as in most towns, villages or cities, it has a castle, a couple actually.  Or at least the remnants of a castle.  And, of course both places have churches galore.  What a surprise!

built in 1684, with its richly gilded altar and the stunning blue and white azulejos (tiles), which were added in 1730.

The tiles completely cover the walls of the remainder of the church.  They’re very touchy about photos, so I had to resort to photographing a post card, which they sell…hmmmm!  Hence, the slightly out of focus pics.

But, the exterior of the church is fair game.  It too, is lovely. 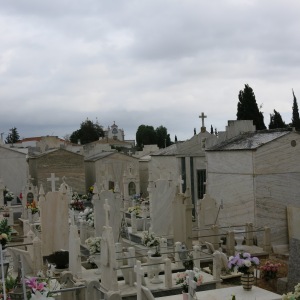 Just around the corner and down the street is the cemetery for the Igreja de São Lourenço.  It’s chock-a-block with headstones and mausoleums.  I find cemeteries fascinating.  They say so much about the culture, so I usually wander into them.  They’re the history of the community they serve.  Then, we drove off to Loulé proper.

Loulé has a fantastic market.   This, over 100 year-old market, has architecture that is decidedly Moorish.  We arrived a bit later in the day, so there weren’t many stalls still open, but 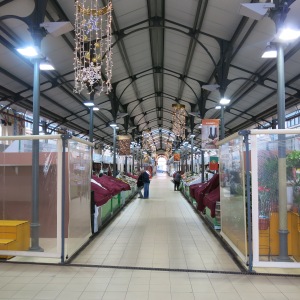 Honey Pots at the Loulé Market 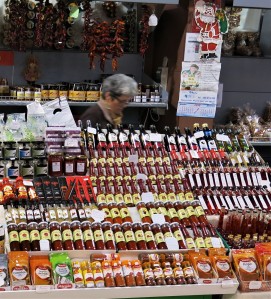 The Goddess managed to find some things of interest—piri-piri flakes and condiments, rosemary honey in a pretty little jar (yes, I dragged it all the way back here and it didn’t get broken!), along with some fabulous bay leaves and Portuguese pine nuts.

The statue, we’ll call her the “Lady of the Market”, watches over the patrons.

After the market, we wandered a bit, down some side streets and through this archway, that allowed you into the walls of the castle, that sheltered the inhabitants within its walls.  There’s a remnant of it right there on the left of the arch. 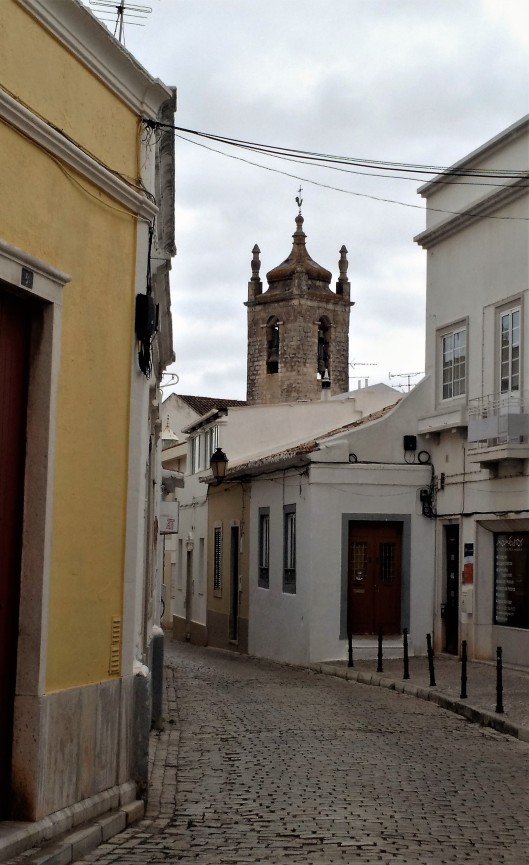 We wanted to see the church, if it was open (it wasn’t).  The church dates back to the 13th century and was built on the site of a mosque, with the bell tower being a former minaret, which you can clearly see the lines of, can’t you?

I found a cooking store that sells the copper cataplanas (on the top shelf), which are made in this region.  I thought long and hard about getting one, but decided against it…now, I’m not so sure!  It was now time for a little something to give us an energy boost, so we found a pastelaria and had a coffee and some tasty pastry.

With our energy returned, and uncooperative weather, we decided to head back to Albufeira.

But, perched high atop a hill, is the Nossa Senhora da Piedade (Shrine of Our Lady of Piety or The Sovereign Mother), a Marian shrine dedicated to the patron saint of Loulé.  We walked the grounds, as it was too late in the day to visit.  At Easter time the ‘Festival of the Sovereign Mother’, is a major celebration, attracting people from all over the country, so that will be coming up soon.  It was cloudy day and rained a bit, but all in all, we had a good day.  By the time we got back, it was about time for dinner, so we headed to the local supermarket, Pingo Doce, in Albufeira.

I adore exploring supermarkets.  I’m particularly partial to exploring them in other countries and this was such a pleasure.  Gorgeous produce (look at those pointed cabbages and the Rocha pears), the poultry, the bacalhau (salt cod), and the dry-cured hams or presunto. 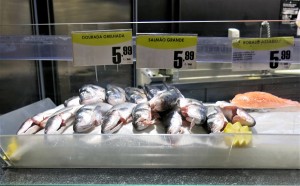 Meat and Chicken at Pingo Doce

We had dinner at the supermarket, Pingo Doce, they have a cafeteria-style restaurant that offers fish, chicken, beef, pork which they will grill or they have some ready-made dishes to choose from…whatever you want.  Seriously,  it was delicious, and incredibly inexpensive.  Not all Pingo Doce markets offer this, but if you’re hungry and near one that does, this is a great option. 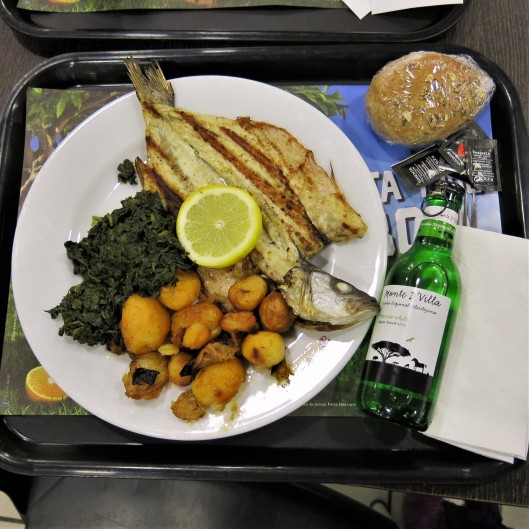 I had the Dourada, a type of European bream, which a young man brushed with butter and grilled right then and there, while we waited.  It came with two sides; I chose spinach and some wonderful little potatoes, in a paprika sauce.  I had a small bottle of wine and the whole thing cost 7.50€!  The fish was perfectly grilled and the whole thing was absolutely delicious…and no dishes to wash!

The perfect end to a perfect day…tomorrow, Faro!