Tavira was the eastern-most town that we visited.  Churches abound in Portugal, but this town may have the most—you’ll find over thirty-six churches, several monasteries and the ruins of yet another Moorish castle!  Lots and lots to enjoy.

It was yet again, an overcast, cloudy day, threatening rain off and on all day.  Then finally, the skies opened, but alas, we ducked into a pastelaria for our afternoon coffee and sweet treat.  But, I’m getting ahead of myself.  We parked the car near Igreja do Convento de São Francisco, which was closed at the time. 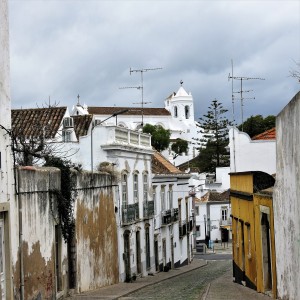 Tavira is a sweet little town and it was very enjoyable to wander the side streets and alleys on our way to the Castle.

As we walk toward the castle, we can see the top of Igreja de Santiago, which we’ll visit a little later.  But, first…we’re off to the castle.

This castle has pieces of the original walls that pop up around the town.  These are the very walls that would have enveloped and kept the townspeople safe.  In the foreground is a wonderful example of tile work.  Now, off to the castle proper….

This is a small castle, yet again built by the Moors.   Those Moors were builders!

View from The Castle at Tavira – Algarve

This castle is a bit different, as it has a charming little garden in the center.  This is the one castle we visited that does have railings, but the stairs are steep, very steep, narrow and winding.  But do climb the stairs to the various turrets, for some lovely views of the town, with the Rio Galão in the distance. 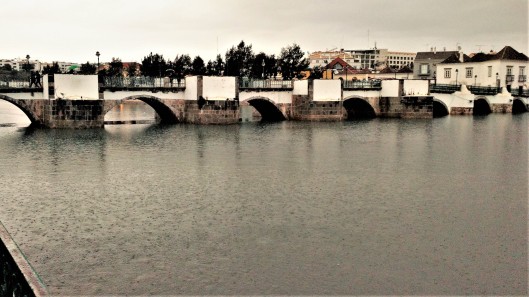 The Ponte Romana, the Roman Bridge, built in the 17th century so it must be assumed that it is built in the style that the Romans built.  It is a foot bridge that crosses the Rio Galão, and as you can see, it’s now raining and we weren’t singin’ in the rain!  But, Portugal needs rain, as it has been very dry. 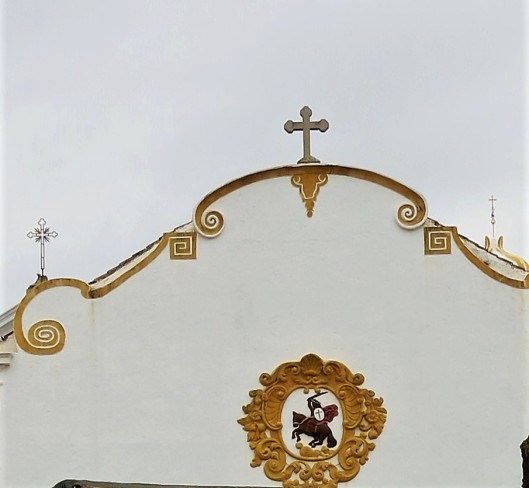 Igreja de Santiago building began in 1270.  It was destroyed by the 1755 earthquake and then completely rebuilt.  The church has several altars, some lovely architectural touches and tile-work. 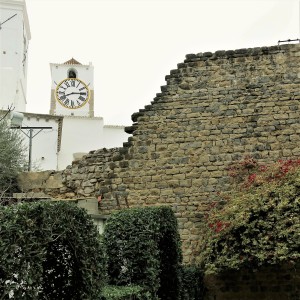 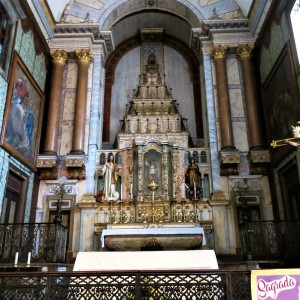 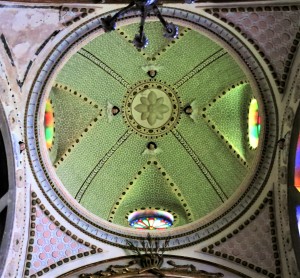 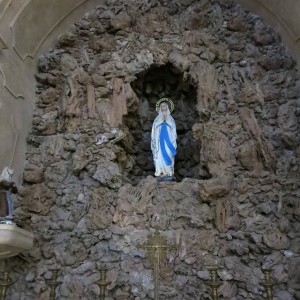 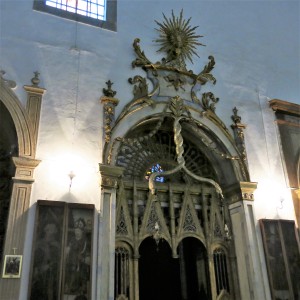 So we wander outside, across a small square to the Convento da Graça. 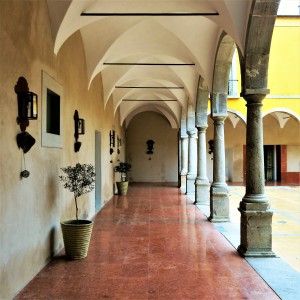 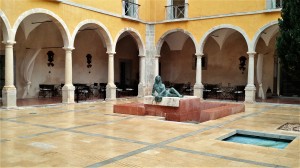 Courtyard in the Convento da Graça Pousada in Tavira – Algarve

Convento da Graça, now a pousada or hotel, was built in the 16th century.  It was originally a Convent of Cloistered Augustinian Nuns, founded in 1569.  It stands very near the castle on a site that was most probably once part of the Jewish quarter.  It is a lovely place to stay and has offers wonderful dining options.

Side Door of the Igreja de São Francisco – Tavira – Algarve

Igreja do Convento de São Francisco, founded by the Franciscans between 1250 and 1330 was plagued by various disasters, earthquakes in the 18th century, a collapse and a dreadful fire in the 19th century.  This church is a survivor!   Wander across the square to

The Igreja São José do Hospital – Igreja de São José has its origins in the 15th century.  It was erected for the purpose of accepting patients from overseas provinces.  Local lore says that in 1721, the image of São José is supposed to have perspired beads of blood three times, leading to the name change of the hospital.  So we head back to the car, had our afternoon coffee and drove back to Albufeira.  Dinner was yet to come! 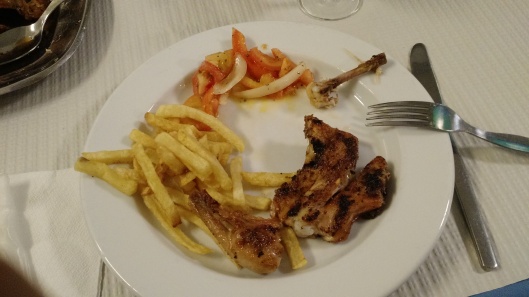 We headed off to Guia for Frango Piri-Piri or Chicken with piri-piri chiles.  It is rather common to find “houses” of Frango de Piri-Piri in many parts of Portugal.  Restaurante Ramires (Rua 25 de Abril, Guia, Albufeira 8200-433, Portugal – +351 289 561 232), is famous for their version of Frango de Piri-Piri.  Generally, the chicken is seasoned with piri-piri chiles and grilled. 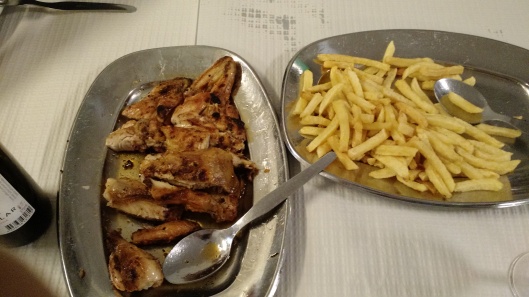 The chickens are usually served with a side of potatoes, either boiled or fried; we had the fries.  We ordered one and half chickens, fried potatoes and some of their house salad, which is really just chopped tomatoes and onions with oil and vinegar, but quite delicious.  It works well with the chicken.  A bottle of their house red rounded out our dinner.  It was delicious, with nothing but bones left on our plates. 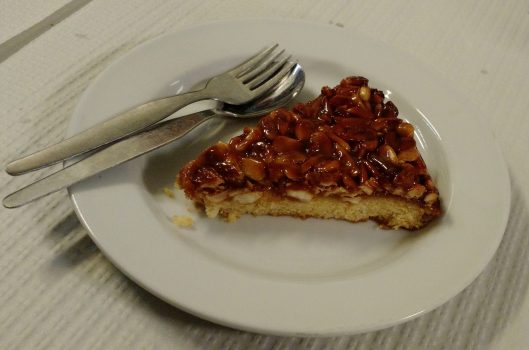 But, we needed a little sweet, so I ordered the tarte de amendoa, which was the best one I had during the entire trip…mmmmmm!  It was cakey, with caramelized slivered almonds on top and not overly sweet.  There’s a wonderful tale about almonds—apparently almonds trees became part of the landscape in this region when an Arab prince, concerned that his wife from a northern country, missed the snow so much she was inconsolably depressed. The prince ordered that almond trees be planted, because their blossoming created the illusion of snow-covered fields.  Isn’t that lovely?

The Latin Lover ordered chocolate mousse, which he thoroughly enjoyed…and coffee.  Always coffee.  And tomorrow is another adventure.

5 thoughts on “Portugal – The Algarve, Tavira”