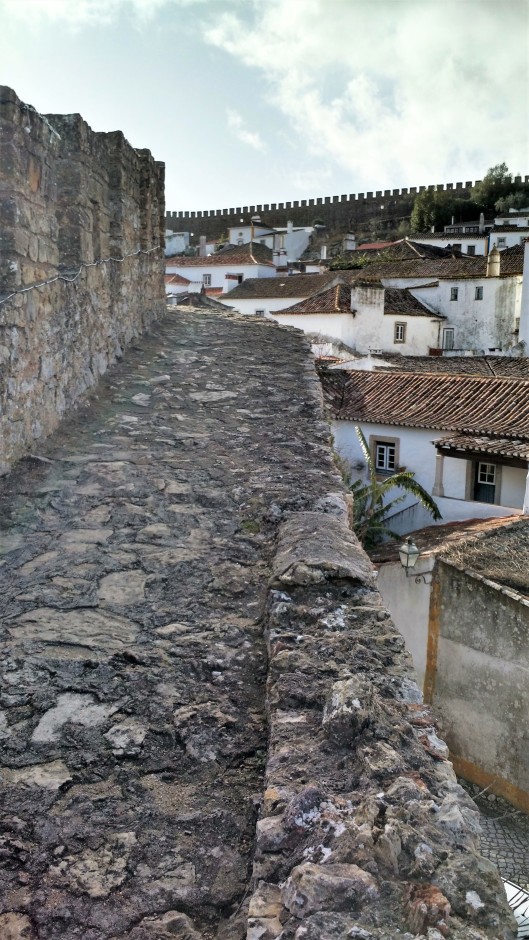 Óbidos is one of the few remaining examples of Moorish occupation, where an actual functioning town lies within the wall of the 12th century castle.  Óbidos is a day trip from Lisbon, with time leftover to explore a bit of the surrounding area. 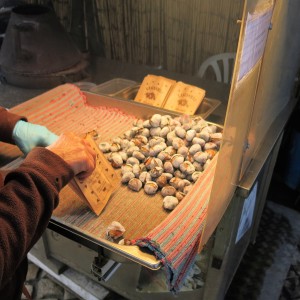 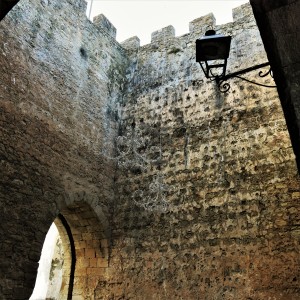 Christmas Decorations at the Entry of the Castelo de Óbidos – Portugal

We entered through the gate, with the chestnut vendor selling her wares.  You see chestnut vendors in many of the towns, in the winter months.  This was January, the temperature was lovely, though we had many rainy days, but notice the lack of tourists.  There are some “chandeliers”, leftover decorations from Christmas. 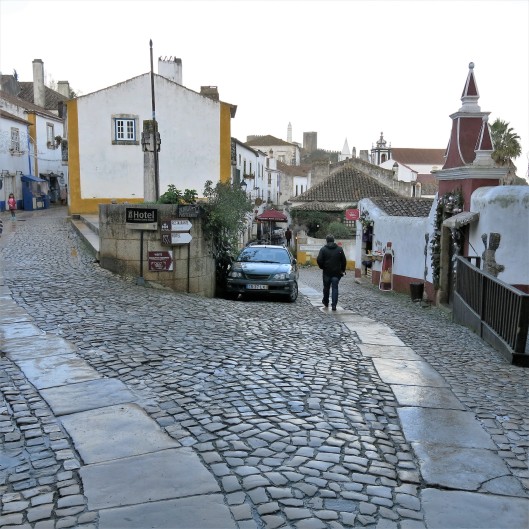 Rua Direita, the main street, sells tourist items in shops, much the way they might have appeared in earlier times. We wandered to the right, and found a lovely little place for a coffee.

You may want to bring back a bottle of Ginja de Óbidos, a cherry liquor produced in the region.  If that isn’t your choice, you really must try it.  The liquor is usually served in small chocolate cups, which can be eaten after drinking the Ginja.  Go for the dark chocolate version, as it balances the sweetness of the Ginja.

We continued on our way toward the crenulated walls, but along the way we passed by this incredible “vine” that must be decades old.  In spring, the vine will produce lovely bunches of grape-like flowers.

We passed the Igreja de Santa Maria (there are some great pictures in this blog…info, too) where King Afonso V (aged 10) married his cousin, Isabel I (aged 8) in the mid 15th century.  Those ages may not be completely accurate, but they were young…very young…and related.  This church is beautiful, but was closed when we were there.  It is worth noting that during the winter months, churches don’t seem to offer too much flexibility for visits. 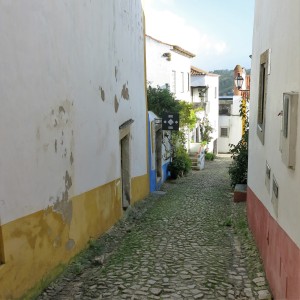 There are some interesting, less touristy back streets, 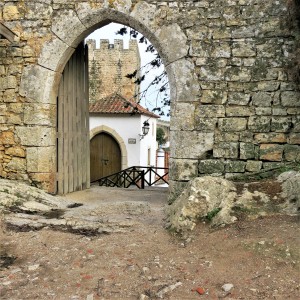 as people actually live here.  We wandered further toward the upper reaches of the wall.  We walked and wandered until we reached 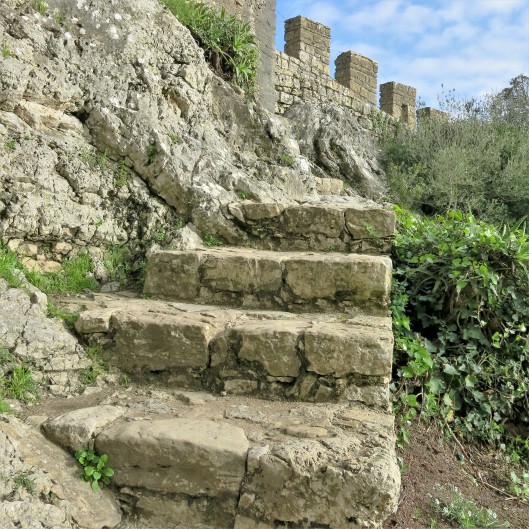 an entry point to get on the wall.  Once you’re on the walls, you’re going to be there for awhile, as there aren’t too many ways down.  Let me just say, this is not for the faint of heart.  As you can see, there are no railings, the walkways are narrow and the drops can be daunting…use caution, 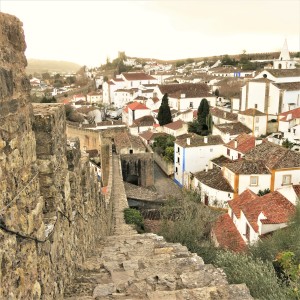 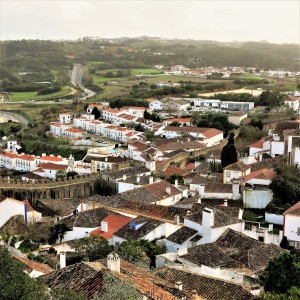 but the vistas are something to behold.  So wander, snap some pictures and just enjoy the day and the view. 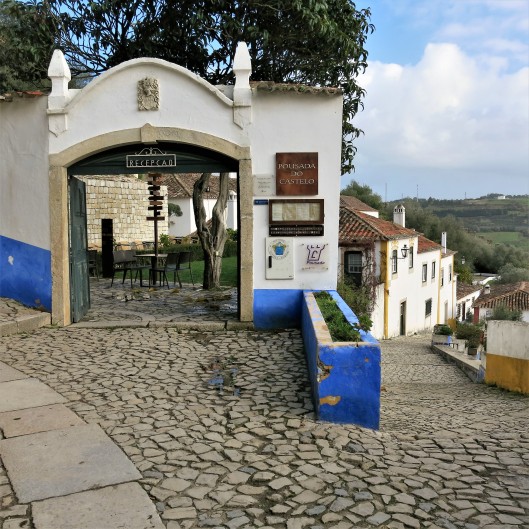 If you want to stay the night inside the walls, there is the Pousada do Castelo.  But, it would be prudent to make reservations.  It was late afternoon, we had our coffee and pastry, so we headed out.

Just outside the castle walls, you’ll find the 16th century aqueduct, constructed to transport water to the town.  It was funded by Queen Catherine of Portugal, who sold her lands surrounding Óbidos, to pay for its construction. While there are larger aqueducts in Portugal, the Óbidos aqueduct is quite fully intact. 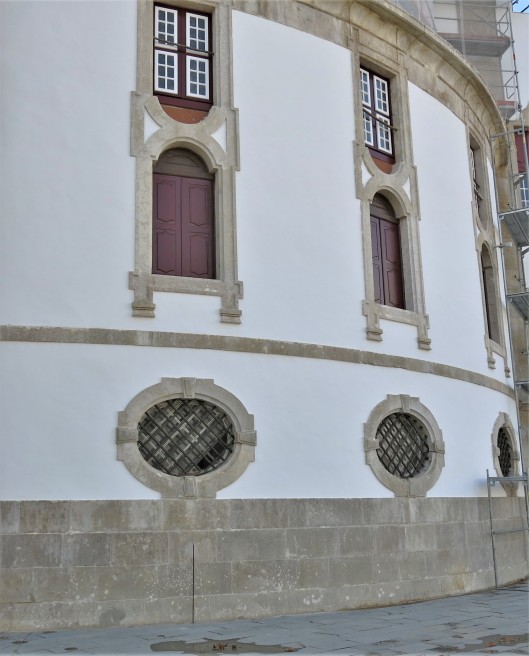 and the Santuario do Senhor Jesus da Pedra.  The church was almost completely enveloped in scaffolding, as there was a major renovation going on.  But we wandered about to the back and found an opening. It was worth it. 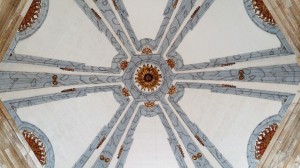 Pictorial Tilework on the Altar

Pictorial Tilework on the Altar

The interior altar, with it’s tile, was truly lovely.

By this time, we are ready to return to Lisbon, but first we drop by the nearby (about 26 km away), working fishing port of Peniche; visit their lovely port.  Interestingly, Óbidos was at one time a port, with ships moored at the base of the battlements.  Dating from the 15th century, due to tsunamis (from earthquakes) and some ugly winter storms, sandbars formed, thus restricting water, so the ships could no longer navigate and the waters were pushed out.  The coast changed and was no more, for Óbidos.  It’s back to Lisbon, 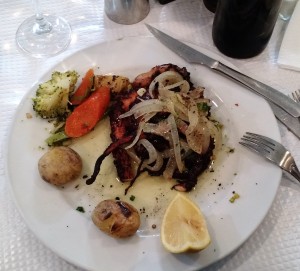 where we had a delicious dinner, at a O Pescador (Rua das Flores, 10 –  B, Tel. +351 214 832 054 ) in Cascais.  We started with these delightfully garlic-laced clams (Amêijoas à Bulhão Pato) and some good bread.  I had one of the daily specials, roasted octopus, vegetables and some those incredible Portuguese potatoes, as well as a couple of glasses of vinho verde.

Statue in the Square near the Harbor

Fishing Boats in the Harbor with Lisbon in the Distance

Then, a little walk back to the car and off to bed.  Good night….