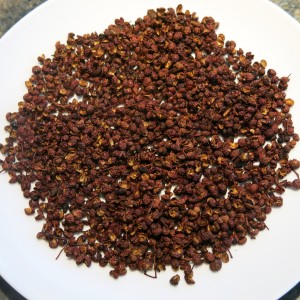 Szechuan, Sichuan, Szechwan Pepper and any other iteration(s) there might be, are more-or-less the same thing.  We’re going with Szechuan Pepper, because The Goddess likes the look of the “z” (or “zed” for our friends from other English-speaking countries), in the word….humor (humour) me, okay?  It’s currently snowing and blowing like crazy, YET AGAIN, making this a rather appropriate spice to be discussing.  It’s Sunday.  From now on, Sunday will be the day we talk about an individual herb or spice; I guess what I’m talking about is really a flavoring agent, which both herbs and spices fall under…as does citrus and probably a heap of other things that I simply can’t think of at the moment.  We will be approaching this subject from a purely culinary angle, not medicinal…The Goddess is many things, but a physician she is not.  With the Chinese New Year almost upon us, and the snow coming down and burying us further, I thought this pungently, interesting spice might be just the thing to add some spark to a cold, snowy day. 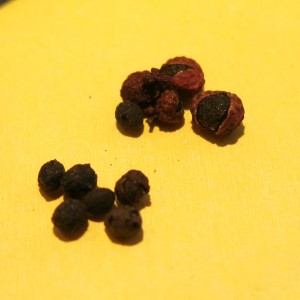 First of all, let’s discern what we’re talking about when we refer to Szechuan pepper as a spice.  What we are really talking about using, is the reddish-brown fruit wall or pericarp (the flower “shell”). This is the “shell” that appears burst open leaving a deep black seed inside.  The seed is usually discarded, as it is considered to have a bitter taste. Personally, The Goddess’s taste buds are apparently not that discerning or she’s simply too lazy to remove it. I leave it in, but unless you can grind it very, very finely, it can impart a bit of sandy, grittiness when consumed.  There are a significant number of species that fall under the Zanthoxylum umbrella. We’re going to focus on Zanthoxylum piperitum/simulans, which are very similar and most readily available in the US.

Usually there are stems and what appear to be wicked-nasty thorns (because they are!) mixed in with the pepper (see the upper left corner of the picture). I pick those out, because they are unpleasant. Now, let’s talk aroma and flavor.  Szechuan pepper offers up a heady, very distinct aroma.  It’s perfume-y and citrusy, in a spicy sort of way, with a hint of anise and with slightly smoky, earthy overtones.  As to flavor, it has a decidedly lemony taste, but those same hints of anise and earthy, woody back flavors. 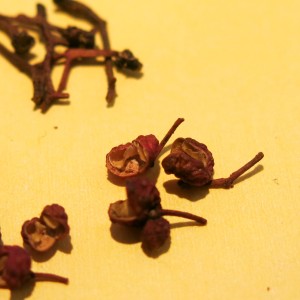 Szechuan pepper combines well with star anise, ginger, onion and chiles.  However, the main thing for you to be aware of is that most people experience a slight numbing effect of the lips and tongue (I’m not talking dental-chair numbness—remember the dental experience of Dudley Moore in “10”…yeah, not that!).  According to Harold McGee in On Food and Cooking, Szechuan pepper is not simply pungent, but “they produce a strange, tingling, buzzing, numbing sensation that is something like the effect of carbonated drinks or of a mild electrical current (touching the terminals of a nine-volt battery to the tongue). Sanshools appear to act on several different kinds of nerve endings at once, induce sensitivity to touch and cold in nerves that are ordinarily nonsensitive, and so perhaps cause a kind of general neurological confusion.”  I’m not quite sure what Harold is doing with 9-volt batteries, but to each his own!  This numbness is completely temporary and not at all unpleasant, as Szechuan pepper is commonly used in conjunction with a significant amount of chiles…and those little devils are hot!

Before you make anything, please roast the pepper in a dry skillet, cool and then grind the pepper.  I use a coffee grinder, like this one, but I ONLY use this grinder for grinding spices.  NOTE:  You can also put the pepper in a simple pepper grinder and put a few grindings on salads, chicken, etc.

Szechuan Pepper-Salt or Hua jiao yen, is simple to make and it is excellent with chicken, duck or pork.  I’m not going to give you an actual recipe, but just proportions.  I use:

Stir the two together and store in a glass jar.  Use within 3-4 months (and you will).

The second thing I do, is make Szechuan Oil…again no recipe.  After you roast 1/4 cup of the pepper in a dry skillet, set it aside.  In the same skillet, heat about 3/4 cup vegetable oil until it begins to shimmer…you want it hot, but not smoking hot (like The Goddess!  Sorry, that was just too easy to pass up!).  Turn off the heat and stir in the roasted pepper.  Leave for 20 minutes or so until it’s cooled.  Strain out the pepper; stir in 2 tablespoons of sesame oil and pour into a glass jar.  I store it in the fridge.  I add this to stir-frys, vinaigrettes, drizzle over green beans or asparagus and it’s great with roasted vegetables, too.  Normally, this oil does not have the sesame oil, but I really like that addition…add it; leave it out…it’s up to you.  Oh yeah, Szechuan grows in the Himalayas, which as you might imagine, has a pretty limited growing season.  In Nepali and Tibetan cuisine Szechuan pepper, along with some other spices, is used to flavor a dumpling called “momo”, which is filled with cheese, veggies and either yak, water buffalo or pork…other options for those of you with access to yak and water buffalo!

Some people are completely unaware of Szechuan pepper and with good reason.  For well over 30 years, the FDA did not allow the importation of Szechuan pepper because it was a possible carrier of citrus canker, a bacteria that has the potential to damage/destroy the citrus industry.  There was never an issue with human consumption, and importation has resumed, provided the pepper has been heated to 158°F (70°C), a point at which the canker bacteria is killed.  There are a number of recipes using Szechuan Pepper or Pepper-Salt with chicken or shrimp.  If you are interested, I’ll be more than happy to post one (or two)…let me know.

The Spice Mill in Manchester, CT has Szechuan pepper and they do mail order.