Tradition!  Tradition!  Can you hear the music soaring?  Can you see the fiddler on the roof?  Well, Oyster Stew was a New Year’s Eve tradition in my home.  It was a simple version—butter, finely minced onion, whole milk, heavy cream, oyster and their liquor and heaps of black pepper…any oyster crackers.  Simple and simply delicious.  Let’s be clear here.  This is the stuff of dreams.  It’s rich and velvety.  It’s the elixir of the God’s.  Don’t skimp here.  Use the butter.  Use the heavy cream.  Indulge.

This “tradition” began early in my parents marriage.  They wanted something special for the holiday, but they didn’t have much to spend.   Oysters were cheap back then.  Now, I have to think twice about purchasing even a pint!  But, hey…it’s the holidays! 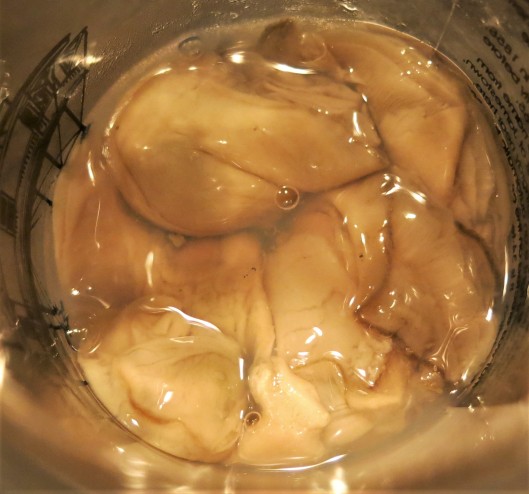 They would buy a gallon of already shucked oysters, swimming in their liquor.  Yes, I said a gallon.  My mother would sort them by size.  The large ones were breaded in cracker crumbs and fried for our Christmas Eve dinner.  The liquor and smaller oysters were saved for stew, which was always served on New Year’s Eve.

I love the pure simplicity of the version my mother made—just butter, oysters and their liquor, whole milk, heavy cream, and a ton of black pepper.  We always had saltines in the cupboard, but when there was going to be oyster stew, we got those cute little oyster crackers.  It was just so special.

Most versions are pretty similar to her version, as is this one.

I do like to chop the shallots, celery and fennel bulb very finely…I like there to be just bits.  You don’t want them to color, just soften.  The pictures for this are a bit spotty, as I was distracted and didn’t take them when I should have.  But this is a really simple recipe.  Let’s all pretend we’re seeing finely diced celery and fennel bulb here, too.  Okay? 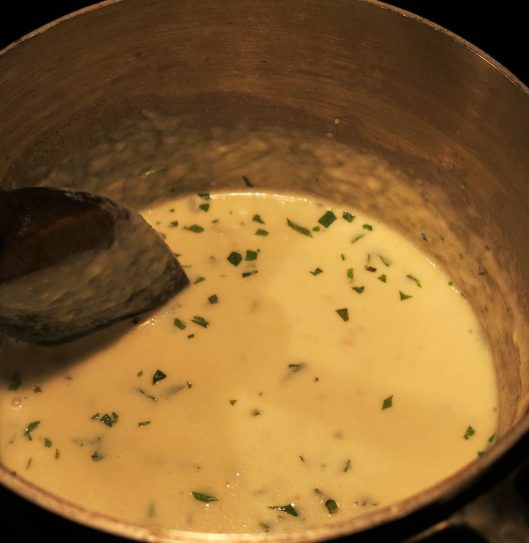 Sooooo, I happen to really love tarragon with oysters.  It’s very simpatico with any shellfish, it seems.  You can omit the curry powder, but it adds a gentle layer of flavor, without overpowering the delicate flavor of the oysters.  It works.  I like to add the spinach at the end, just a couple of handfuls of leaves.  I want them to just wilt, not really cook.  Oyster stew by nature, is a thin soup.  Sometimes, I like it a bit thicker, so I add a little cornstarch slurry or use some rice flour.  I have even stirred some mashed potatoes into the soup.  They thicken it nicely, but the consistency is just a bit “grainy”.  I have added pre-cooked potato cubes in with the milk/creams.  I do like them and they will stretch a pint of oysters to serve more people.  Because you just never know who will drop in, do you?

The key to a really good oyster stew, is to not over-cook the oysters.  If you can find smaller oysters, they work better for oyster stew and sometimes they’re less expensive.  What you’re really doing, is poaching them.  You don’t want the dairy to boil, but to just barely simmer.

When the edges of the oysters just barely begin to curl or “ruffle”, they’re done. 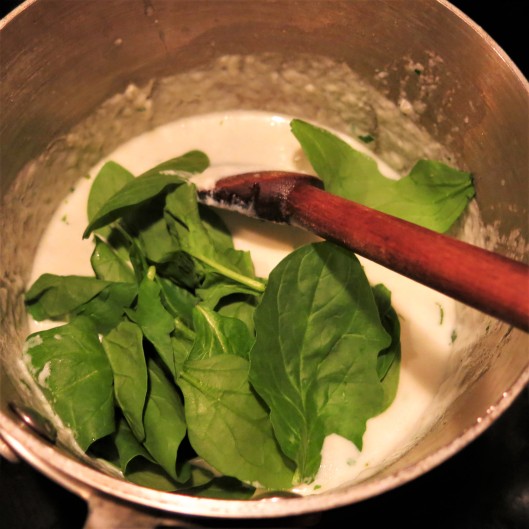 I pull the pan off of the burner, drizzle in a few drops of lemon juice and the spinach.  Stir gently. 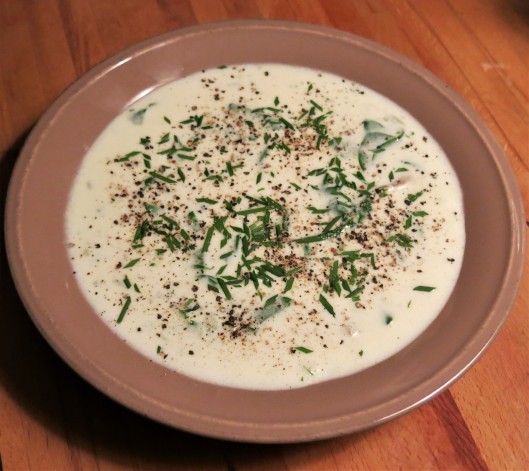 Now this is very important, oyster stew needs lots and lots of freshly ground black pepper.  And I like some snipped chives, too.  That’s all there is to it!

Oyster Stew with Tarragon and Spinach

Over medium heat, melt butter in a heavy-bottomed pan. Add shallots, celery and fennel bulb, if using; cook until tender, about 3-4 minutes.
Add the tarragon, salt, curry powder, and cayenne, if using.  Stir for about 30 seconds.  Add the milk, half-and-half and heavy cream; stir well. When mixture is almost boiling, add oysters and their liquor.  Stir gently and frequently until oysters curl at their edges. Toss in the spinach and black pepper.  When oysters curl, the stew is done.  Remove from the heat.  Squeeze in a few drops of lemon juice; taste and additional salt, if needed.  Serve with oyster crackers or cornbread.

NOTE:  You can add diced potatoes to the stew.  Pre-cook them until just barely done; add with the oysters.  Also, you can add a couple of cloves of garlic, put through a press, if you wish.  But, be careful not to over power the oysters.

3 thoughts on “Oyster Stew with Spinach and Tarragon”