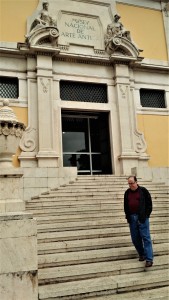 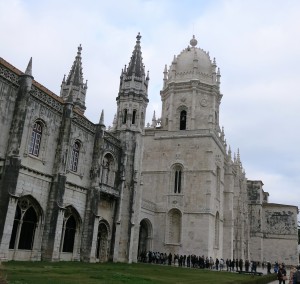 I was particularly taken by the lovely little statue of a very pregnant Madonna.  How many Madonna’s have we seen?  But, never before a pregnant one.  As you might imagine there are an inordinate number of pieces that have a religious focus.  No matter how you feel about that, some of these are simply put—breath-taking.

There is the Temptations of St. Anthony by Jheronymus Bosch, ca. 1500.  It is a triptych, bringing together the four elements of the Universe—air, earth, water and fire. 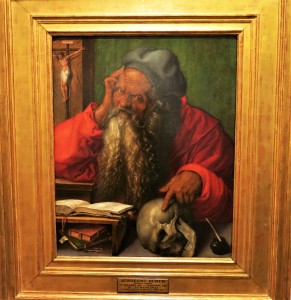 There is the lovely portrait of São Jeronimo by Albrecht Dürer, with his mind-blowing talent.  Look at that beard.  Isn’t it spectacular?   Here is just a smattering of some of the other truly stunning paintings. 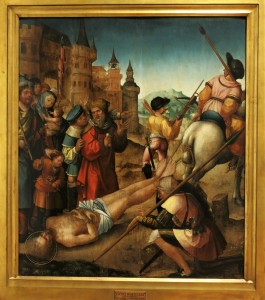 There are significant pieces in both gold and silver, as well as ivory, inlaid wood for the Portuguese forays into Goa. 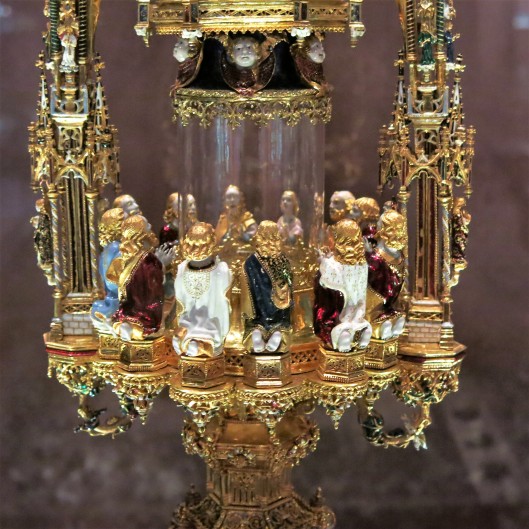 In gold, there are pieces like the Belém Monstrance, 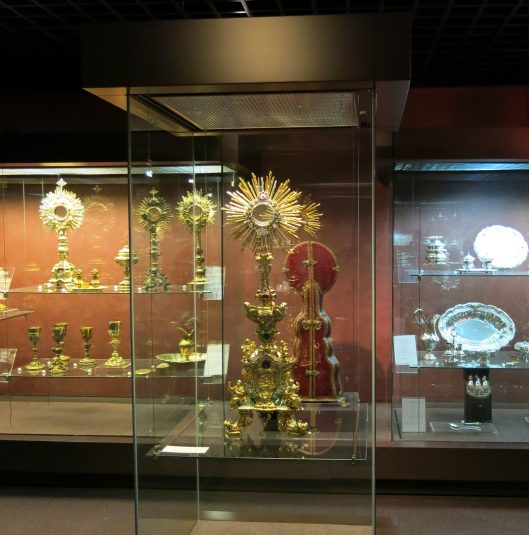 as well as this less famous monstrance, with it’s carrying/storage case and others you can see on the left, in the background. 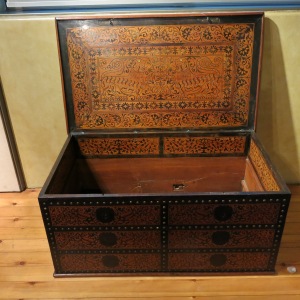 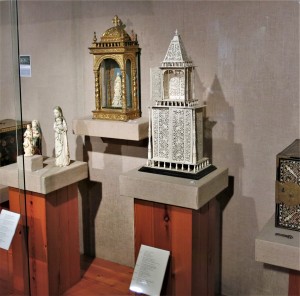 Here is an example of furniture from Goa and ivory carvings. 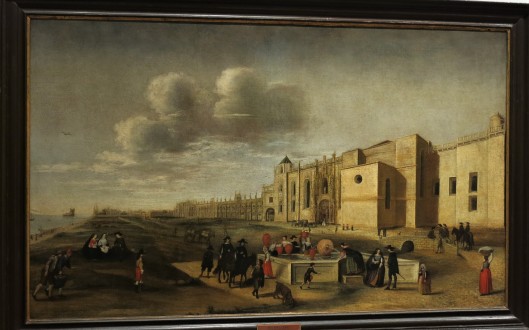 And finally, a painting of the Mosteiro dos Jerónimos (Jerónimos Monastery), where we are headed next. 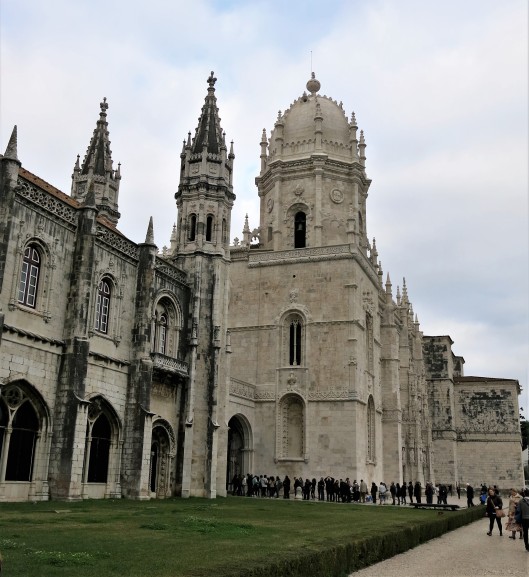 Mosteiro dos Jerónimos a former monastery of the Order of Saint Jerome, including the Igreja do Santa Maria.  There are magnificent examples of the Manueline-style of architecture, that is specific to Portugal.  There is a fee to enter the Mosteiro, but the Church is free (the Sacristy charges a small fee). 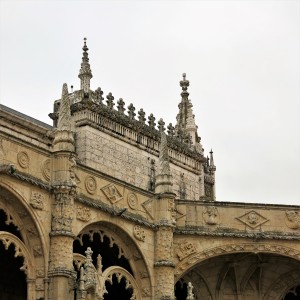 This involves some wonderful gargoyles, curlicues, faces and animals…it’s just wonderfully whimsical.   Construction on the monastery began in the early part of 1501 and was completed 100 years later.  The King, Manuel I, chose the Hieronymite monks to take up residency in the monastery.  It was their task to pray for the King’s eternal soul, as well as pray for the navigators who were departing to discover foreign lands.  The monks did their duty until the order was disbanded in the mid-19th century.  Interestingly enough, the 1755 earthquake that destroyed almost everything else, did little damage to the monastery…must be all that praying!  There are actually two buildings here, the Monastery 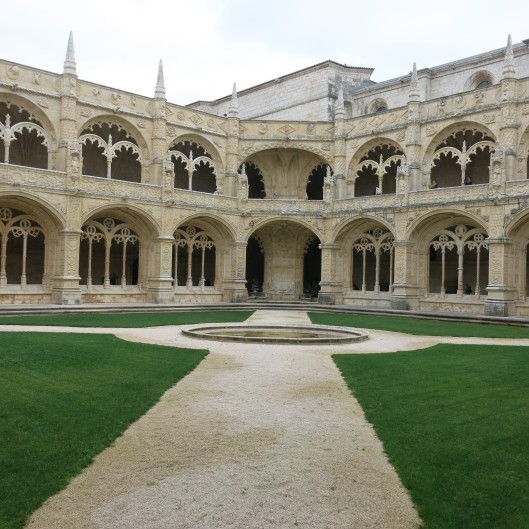 and the Igreja de Santa Maria (Church of Saint Mary). 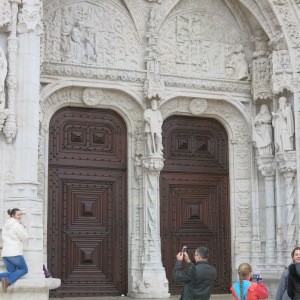 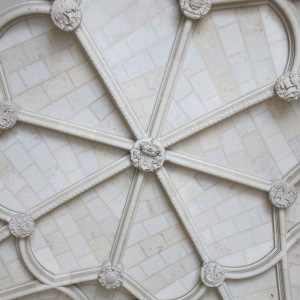 The Igreja is the final resting place of a number of luminaries, including kings and queens. 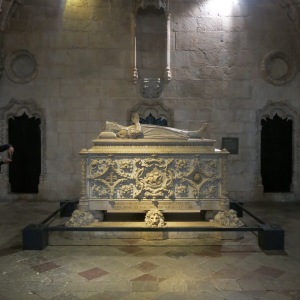 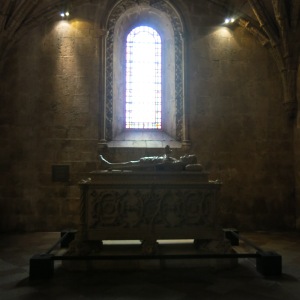 The explorer, who discovered the route to the East, Vasco da Gama and Portugal’s greatest poet, their Shakespeare, if you will, both lay here for eternity.

Near the altar, off to one side, is a small sacristy.  It has some lovely architectural details…just look at that ceiling.  It mirrors the same details in the Igreja, including the Manueline architectural style of the Mosteiro.

This is almost visually overwhelming, so you’ll need to keep that in mind.  But, rest assured that you can reward yourself at 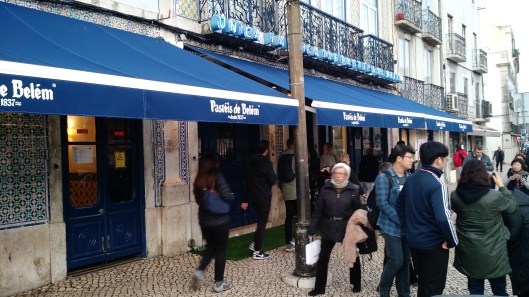 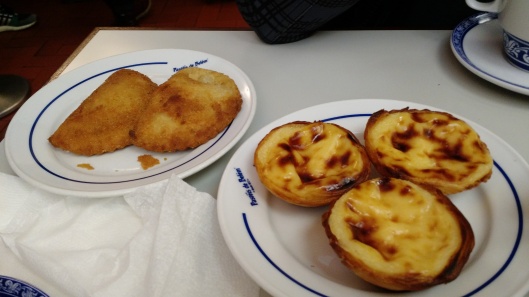 Pastéis de Nata, risoles de camarões (shrimp turnovers) and a coffee.  There is a great story associated with these lovely pastries.  Pastéis de Nata helped the monks survive the liberal revolution of 1820, by keeping starvation at bay.  They used their ties with a local general store and a sugar refinery, to prepare and sell the confections, which became well-known throughout Lisbon, and with good reason.  They are delicious.  The people who make these, apparently have to take a secret oath to safeguard this almost 200-year-old recipe. 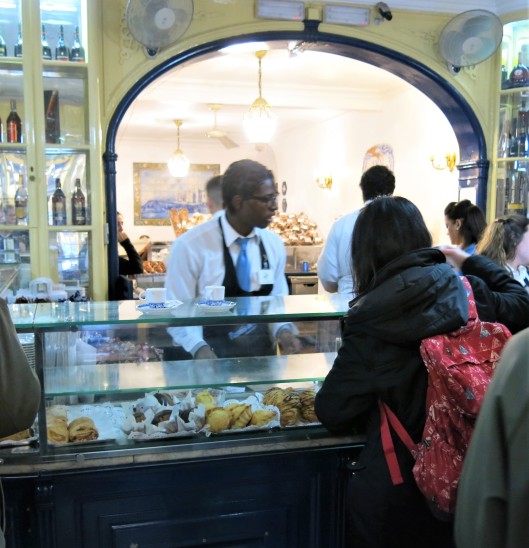 So head on in to either the counter, where you can purchase the pastéis “to go” (there’s a park across the street if you want to “picnic”), or head into the Pastelaria itself.  You’ll quickly realize it is a labyrinth of rooms, almost requiring a map to navigate, and you will probably have to line up.  The Goddess isn’t big on lining up for things, but we were fortunate to find it at a time when there weren’t many people…so whether you want to stand in line for these, is up to you!  But, they are quite tasty!  And that’s it for today….