These Frijoles Negros were the very first thing I cooked in my new toy…a multi-purpose pressure cooker, slow cooker, rice cooker that you can sauté in, so the sofrito, that lovely mixture of garlic, bell pepper and onion, was a breeze. 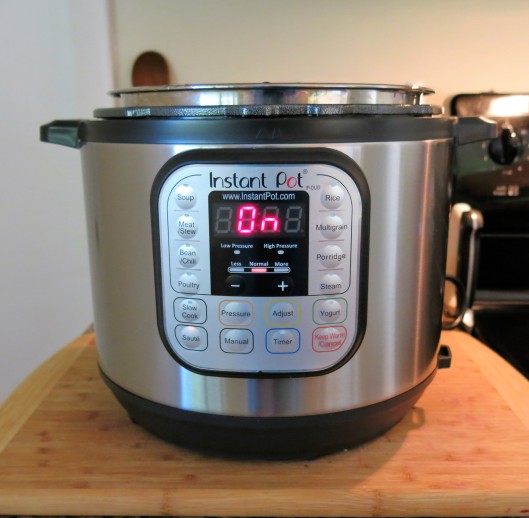 Cubans cook with pressure cookers.  They aren’t afraid of them.  They use them for many things, and a pressure cooker speeds the cooking process up like crazy.  Cubans are busy people, so this is a perfect way to cook things like beans, or meat for that matter, more quickly.  The Latin Lover’s mother was a genius.  Before there were microwaves, she used to “bake” potatoes in the pressure cooker!  See.  Didn’t I tell you she was a genius?

Pressure cookers are so widely used here in South Florida, they are available at the supermarket and in some pharmacies!  Seriously.  They really are.  I’m talking the old, regular standard types.  As well as the sealing rings, in a myriad of different sizes.  These are the things The Goddess cherishes about all the moving around we’ve done; all these little culture adaptations and differences that make life so interesting.  A supermarket, or a market of any kind, is the first place The Goddess heads, no matter where she lands.  It’s a cultural landscape for eating (and drinking)!! 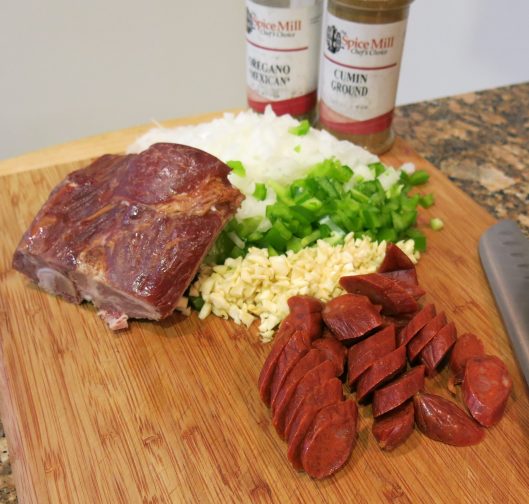 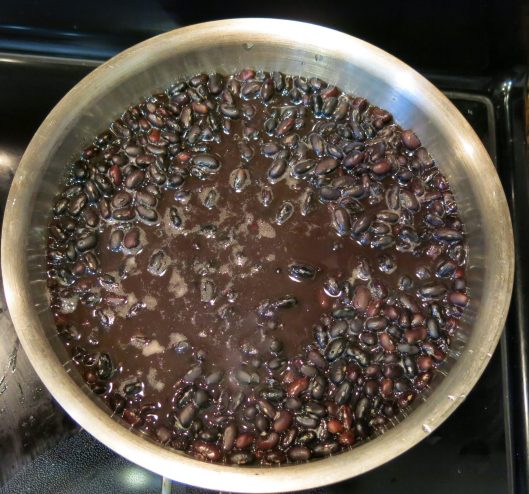 About the beans.  I did do a quick soak.  You know, cover the beans with 2 inches of water, bring them to the boil, remove from the heat source and cover them and let them sit for one hour.  No overnight soaking for The Goddess.  Next time, I’m going to try making them without any soaking…I tell ya’, she lives on the edge, doesn’t she?

I heated up my handy-dandy new pot, tossed some sliced chorizo right there in the liner.  The liner is stainless steel, has an encapsulated base and is quite heavy.  After the slices browned, I removed them and 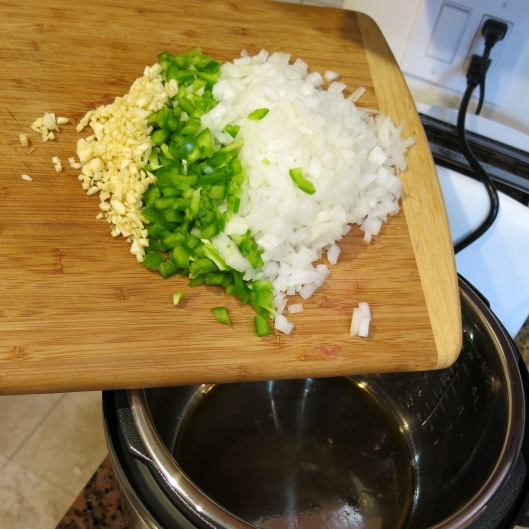 added the onion, garlic and bell pepper, (the sofrito) in some of the chorizo fat.  When it was sufficiently softened, I removed half of the sofrito,

poured in the beans, the chorizo slices, a couple of pieces of meaty, smoked neck meat, the bay leaves, some water and pushed two large pieces of bell pepper down into the mixture.

I popped the lid on, brought it up to pressure (the machine actually tells you when it hits full pressure), cooked them for 7 minutes, turned off the machine and didn’t release the pressure, but let it cool down by itself, about 20 minutes.  When the pressure was released, I added the remaining sofrito, some spices, vinegar, sugar and simmered the mixture for about 5 minutes.  I tasted them and added salt.  They will take way more salt than you think they should.  Beans love salt.  They skinny dip in salt, the amount listed is correct…yeah, 1 1/2 teaspoons kosher salt.

Place dried black beans in a pot; rinse with cold water and drain.  Cover with water by about 2 inches; bring to the boil, remove the pot from the heat, cover and let stand for one hour.

Meanwhile, brown the chorizo in the pressure cooker.  When brown, remove the slices; set aside.  Add the bell pepper, onion and garlic, along with one tablespoon olive oil.  Sauté until the mixture is slightly softened, and just beginning to brown.  Remove half; set aside.  Return the chorizo slices to the cooker, and pour the beans into the pressure cooker.  Do not overfill; do not fill the pressure cooker more than 3/4 full.  Add water to cover the beans by about 2 inches.  Add the first amount of cumin, the oregano, bay leaves and push the smoked meat down into the beans, along with the pepper pieces.

Cover and cook under full pressure for 7 minutes.  Let the pressure come down without releasing, about 20 minutes.  When the pressure is fully released, remove the lid, add the additional cumin, the remaining sofrito, the vinegar, sugar and salt. Cook for about 5-8 minutes over medium heat (not under pressure).  Taste and correct the seasoning.  Serve over white rice; drizzle with some of the mojo.

NOTE:  These are by far better when made ahead.  If you are making them ahead, to serve the next day, remember that the salt will be absorbed into the beans, and you may need to add more before serving.  We like to serve beans with mojo, but some finely diced raw onion and wedges of lime, is decent, too.

It’s much simpler than it sounds.  I love the sauté feature.  It truly makes this a one-pot meal.  Next time, and rest assured, there will be a next time, I will sauté the chorizo, then make the sofrito, removing about half of it, and then do the rapid soak method, right in the pot!  Then, I’ll just continue with the recipe and this will absolutely be a one-pot meal.  I will also try these again, but without soaking.  I’ll let you know how that works and what the appropriate cooking times will be.  Either way, these are delicious.

I made them the day before I wanted to serve them.  We had them with the Island Spiced Pork Roast with Orange-Guava-Onion Sauce with Beer that was, you guessed it, cooked in the pressure cooker.  Do think about either a multi-cooker or a pressure cooker.  There are all sorts of adventures, in pressure, waiting for you!