Every now and then The Goddess runs across some tidbit of info that she is just awed by…this is one of those bits.  Now, you may know all about removing fat from meatloaf using a jar!  Yup, a hot pan, and a jar does the trick.  Social media is a wild and wonderful place.  It’s filled with useless garbage, innuendo and out-right lies.  But, it’s also filled with a plethora of useful and helpful information.  One such piece of info involves a way of removing the fat that accumulates when one makes meatloaf.  It’s so simple, you won’t believe it.  The principle is that a vacuum forms when the hot air created by the steam, forces the cooler air out under the rim of the jar. Then, the cooler air on the outside, allows the air inside the jar to contract, thus creating a vacuum in the jar.  Which, in theory pulls any available liquid grease near the rim of the jar into the jar.  That’s it.  However, I caution you to not put the jar in the skillet during the roasting process.  I have safety concerns about that.  So, I’ve made a couple of changes here.  As I said, I don’t feel it’s safe to put the jar in the oven for the full cooking time.  So, I did a short cut, and I don’t feel there’s any issue with the jar breaking. Here’s what you do—You need a glass canning jar, though I suppose another glass jar would work.  I think the canning jar is the best option, as they are tempered.  I used an 8-ounce jar and that worked great.

When the meatloaf is fully cooked, the liquid is boiling hot and it comes out of the oven, push the onion/pepper mixture aside, so you can put the open end of the jar directly on the floor of the skillet.  The jar will be upside-down when it’s in place.  The skillet and the liquid needs to be hot.  Then, just leave it for about 5-10 minutes.

The fat will be sucked up into the jar, leaving the onion/pepper mixture there for enjoyment.  Don’t disturb the jar, or the fat will pour out. 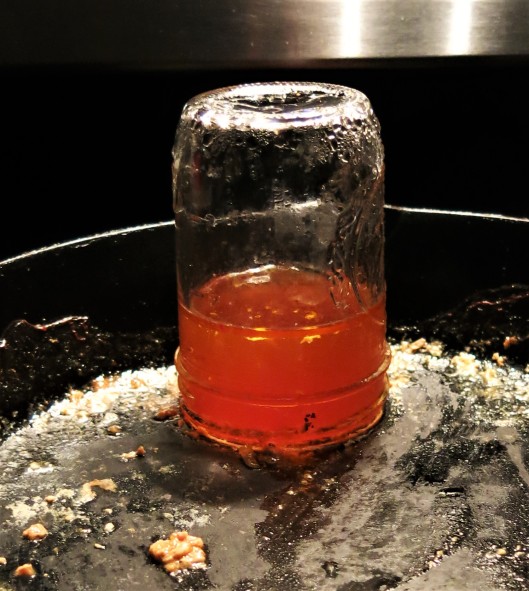 I let the empty skillet stand overnight.  I thought the fat would congeal, but it didn’t.  So, I just held onto the now cool jar and inverted the skillet and jar together.  Then, just remove the skillet and pour out the fat, but NOT down the drain.  And that’s it!

Isn’t that just incredible?  I have no idea who thought this up or where this idea came from, but that person is a genius!  So, I’m passing this along to you.  But, do remember, be careful, as the pan and the fat, are both screaming hot when they come out of the oven.