Rhubarb is spring and early summer.  How something so sour, when mixed with a bit of sugar and/or strawberries can taste so good, is beyond the scope of The Goddess’s comprehension…but delicious it is.  I’m partial to rhubarb crisp, rather than pie.  I love the buttery, crunching topping and when I make a pie, I prefer to use this topping. 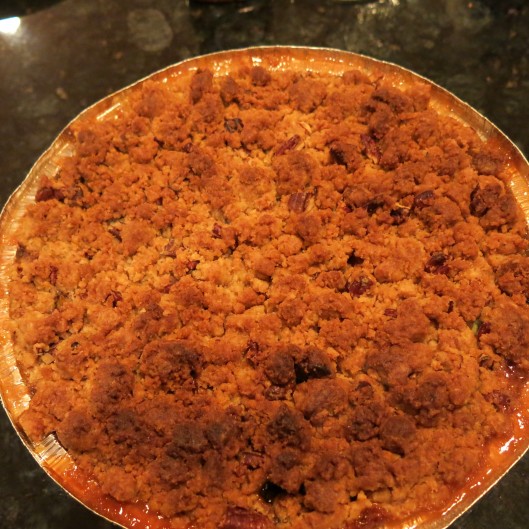 Rhubarb crisp was one of the very first things I remember cooking and it is a really good, and almost fool-proof thing, for a beginning cook to make.  When I was young, growing up on our South Dakota farm, we had about 20 hills all along one edge of the garden.  My mother preferred to make rhubarb crisp, instead of a pie, because it goes together in no time and she had little or no time for such things.  Also, it’s just beautiful and delicious…win-win.  We usually didn’t add strawberries; we just had it solo.  You can also cook the rhubarb with a bit of sugar until it is completely soft, then chill it and serve it cold.  This is rhubarb sauce, you know, like apple sauce, but with rhubarb.  It’s great over ice cream!

Did you know that rhubarb is actually a vegetable?  Beware and be aware…rhubarb leaves are NOT to be consumed, as they contain oxalic acid and are poisonous!  You probably would need to consume large quantities to induce death, so leave them alone and don’t feed them to pets, either.  Rhubarb leaves aren’t going to be the new kale!

Rhubarb freezes extremely well, so you can indulge in a little taste of spring in the dead of winter.  To freeze it, you simply cut it up, dump it into a Zip-Loc freezer bag, remove as much air as possible and put it in the freezer…done!  So rhubarb is not only splendidly good, but it’s a memory for me and one that I indulge in at this time of the year, so you’ll have to bear with me.

I think it’s important not to over-sweeten anything sour, like rhubarb (limes, lemons, grapefruit and passion fruit all fall into that category, too) or it becomes cloying.  The sharpness should just be tempered, but still there.  I do my crisp/pie filling slightly differently now than when I started.

I add a couple of tablespoons of strawberry gelatin to the rhubarb mixture (there in the middle).  It helps color the rhubarb and it adds flavor.  Recently, since I’ve become enamored with pink peppercorns, I have been adding those and some dried rose petals…just so there’s a hint.  Sometimes I add grated orange zest and sometimes a bit of finely diced crystallized ginger.  Just to change things up, but this one is just simply rhubarb, without the experimentation!

For the crisp topping, my mother always added oatmeal to the flour, some sugar and then cut the cold butter into the flour/sugar mixture, etc.  But she found this version of crisp topping in a magazine years ago.  It might have been a Taste of Home, but I can’t be certain. 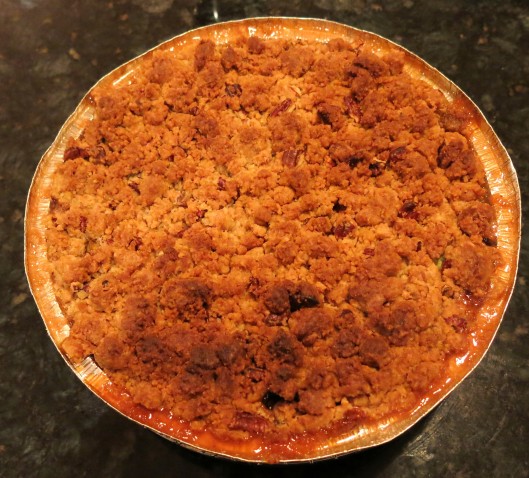 We decided we liked this version better, but you can replace part of the flour with some quick (not instant) oats and it works well.  I also like chopped pecans added to this, though that wasn’t original, nor was the vanilla.

Mix the dry ingredients together; stir in the butter.  Crumble the mixture over the prepared fruit in the baking pan, covering it completely or as well as possible.  Bake at 350°F for 40-50 minutes.  This will spread and become very crisp.  This is enough for a 9X13-inch pan; extra can be frozen.

I melt the butter in a microwaveable bowl, then add the dry ingredients on top, stir it all together

and then crumble it over the rhubarb mixture.  It will feel very buttery.

Combine the rhubarb, orange juice and vinegar; stir will until the rhubarb is coated.

In a separate bowl, stir the dry ingredients, including the orange zest and basil, if using, together until well blended.  Pour over the rhubarb mixture and stir until combined.  Pour into a deep 2 1/2 quart oven-proof dish.  Cover with the crisp topping and place in a preheated 350°F oven and bake until the top is browned the rhubarb is tender, about 50 minutes.  Cool and serve with whipped cream, mascarpone or a scoop of vanilla ice cream.

NOTE:  The rhubarb mixture can be used to fill an unbaked pie shell, topped with a lattice top or the crisp topping and baked until the rhubarb is tender, about 50-60 minutes.

There are times I make individual crisps.  Sometimes it’s nice to just have your own little dessert, all to yourself.  No sharing, just all yours!