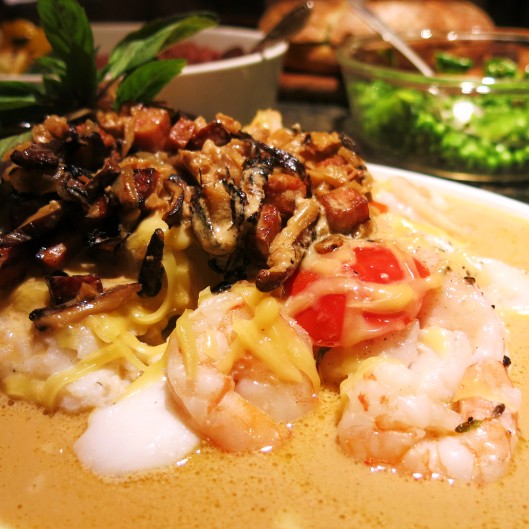 The recipe title is quite a mouth-full, isn’t it?  We enjoyed this wonderful dish, at a dinner party in Puerto Rico, over 25 years ago.  From the first bite, I was completely smitten with the flavor and the texture.  It was creamy, salty, all gooey with cheese and truly delicious.  It was about the best fish I had ever eaten.  The hostess told me she would gladly give me the recipe. I don’t think she wanted to share the recipe, but I was bulldog-tenacious and wouldn’t give up.  I begged and begged her for months, until we were down to pretty much the day before we were leaving the island, when she finally relented.  Sometimes Goddess’s have to be persistent.  She used red snapper filets, which were readily available in Puerto Rico, but any whitefish will do.  I’ve used cod (as I did here), sea bass, tilapia and halibut successfully. Normally, this is more of a casserole-type preparation, but I wanted to speed things up a bit and to cook the fish on the BBQ, so we made a few changes.

I also added shrimp and tomato slices to the fish and shiitake mushrooms to the sauce.  None of these were in the original dish, but remember…we cook with abandon; we experiment, don’t we?

When she prepared it, it was a layered affair.  So, it’s really a fish casserole.  I will, at some point, prepare it as she did and share that recipe with you, because it is truly wonderful.  It consists of sliced, cooked potatoes, sautéed fish, sautéed onions, diced ham, sliced hard-boiled eggs, shredded Swiss cheese all layered in a casserole with heavy cream poured over it!  Is that a combo, or what?  I wanted something slightly less rich and filling for dinner, but with some of the lovelies that she used.  Hence, this version.

Make a double-thickness of foil, about 16-inches square; spray with cooking spray.  Lay the cod filets on the foil, making certain to fold the thinner “tail” under to keep the thickness of the fish as even as possible.  Lay the shrimp around the edge of the filets.  Place the thin slices of butter evenly over the fish.  Season with salt and pepper, torn up marjoram leaves, and slices of tomato; set aside.

In a small saucepan, place the shrimp shells, dried shallots, wine, water and bay leaf.  Bring to a boil, lower the heat and simmer until the liquid is reduced to about 3 tablespoons.  Strain the liquid off, pushing on the shells to release as much liquid as possible; set aside.

Meanwhile, in a heavy skillet, sauté the ham, onions and mushrooms in the olive oil until limp.  Add the reserved shrimp/wine broth and the heavy cream.  Bring to a boil, lower the heat and simmer until the mixture concentrates and thickens slightly, about 3-5 minutes.  Set aside.

Heat 2-3 burners of the BBQ on HIGH until very hot.  Place the foil with the fish mixture on the grill, close the lid and cook for 5-8 minutes until the shrimp are coral pink and the fish is opaque and the liquid is bubbling.  Remove the “package” from the grill, being careful not to spill the accumulated liquid.  Place the fish on a warm platter and cover loosely with foil to keep warm.  Pour the juices into the skillet with the mushroom/cream mixture; add the lemon juice.  Boil the mixture until reduced and slightly thickened, about 4-5 minutes.

While the mixture is reducing, sprinkle the grated Swiss cheese over the fish filets.  Pour the reduced sauce over the cheese, piling the solids (mushrooms, onions and ham bits) on top of the cheese and serve immediately.

NOTE:  This can be baked in the oven, if desired.  Heat the oven to 375°F.  Place the foil with the fish on it on a cookie sheet.  Place in the oven and bake until the shrimp are coral pink and the fish turns opaque, about 8 minutes.  Continue with the recipe as indicated.  For fish, you may use cod, cod loins, tilapia, sea bass or halibut, if you wish. 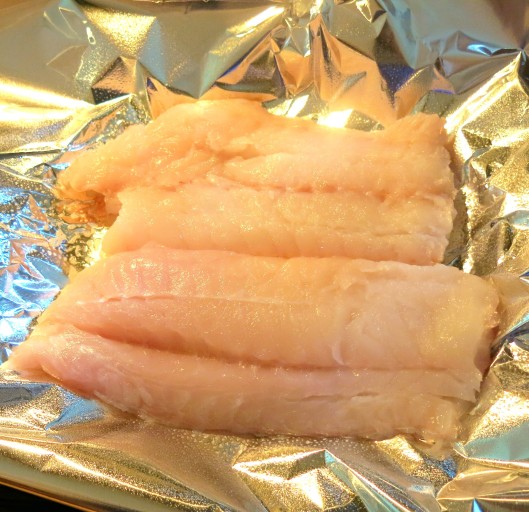 I used a double thickness of heavy foil as the “pan”, topped the cod filets with butter, seasonings, some tomato slices (Hey, it’s summer and they are so good now!) and placed the shrimp around the fish.  Given that The Goddess was doing several things at once, a skill set she no longer seems to have, she didn’t take pre-BBQ pictures, but I’m certain you are proficient and have enough imagination to figure that part out.

I popped the foil on the grill, pushing the foil up around the fish, but not enclosing it completely.  It cooked on high heat for about 6-8 minutes.  This is what it looked like after the grill experience!  (That lovely, buttery liquid will go into the sauce.)

Meanwhile, I cooked the shrimp shells with some water, white wine and shallots, until it was reduced and had lots of flavor.  Again, no pictures…sorry!

While that cooked, I sautéed the ham cubes, onions and shiitake mushrooms together until the mushrooms were limp and the onions browned a bit.  Pour in the strained, reduced shrimp liquid, add a squeeze of lemon juice, the heavy cream and reduce the mixture until it thickens.  You’ll want it thick, as I use the liquid from the fish to add flavor to the sauce, so that will thin the sauce significantly.

Use a large spatula and transfer the fish, to a large platter.  Scatter the shrimp around and over the fish, shred the cheese on the hot fish,

pouring the mushroom-ham-onion cream sauce over everything.  The heat of the fish and sauce will melt the cheese.  Feel free to use Fontina cheese and a dusting of good parmesan, if you would prefer that combo.  This sauce could absolutely have cooked longer to thicken it more.  What can I say?  We were hungry and we had good bread to mop up the juices! 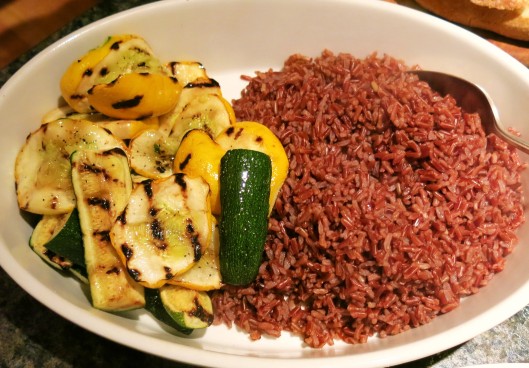 We had Himalayan red rice and grilled zucchini, 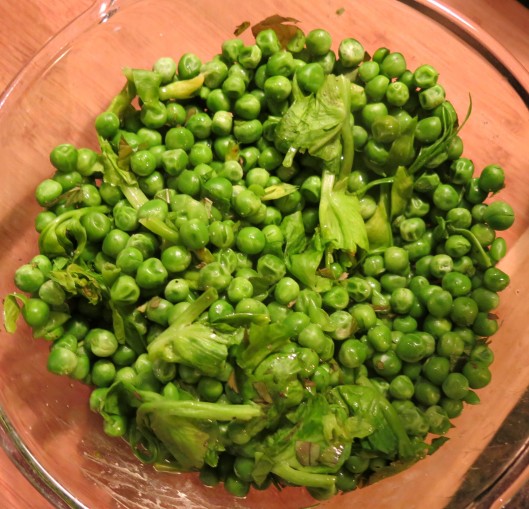 peas with mint and pea shoots and some good, grilled bread with pesto.

Dinner is served and served deliciously!