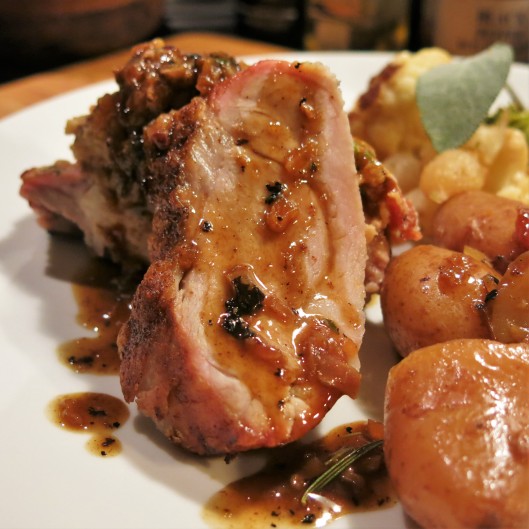 Both of my parents long ago left this world for the big farm in the sky.  They had a good life, a long life and they were pretty happy people.  It doesn’t get too much better than that.  Anyway, yesterday would have been my father’s birthday and today would have been my mother’s birthday.  So my thoughts turned to pork.  In my family, food was much bigger than any gift.  It was the gift.  And pork was always there.  They both loved pork.  We raised pork and it was delicious.  Who knows, maybe this is why The Goddess never met a piece of pork she didn’t love.  Perhaps it’s genetic!  There are so many possibilities, with the different cuts.  But today, it’s  “boneless, country-style rib loins” and some extra dried bread chunks for stuffing.  I love stuffing; they loved stuffing.  So this worked as if it were part of a plan, but we know The Goddess, and planning isn’t her strong suit…she’s more of a “let’s see what’s in the cupboard” sort of deity; I think they call this pantry cooking, don’t they?

I love these “boneless, country-style rib loins”.  There are a great size, they are lean and they cook quickly.  While they can dry out, because you cook them hot and fast, that doesn’t happen.  Season them on both side with salt and pepper and then they’re ready to stuff.

Preheat the oven to 425°F.  Season both sides of the loins with salt and pepper.  Lay one half of the loin, cut-side up in a heavy pan (I use a cast iron skillet).  Spread the stuffing over the meat; it will be at least 1/2-inch thick.  Place the second loin on top of the stuffing, cut-side down.  Drizzle the oil over the top; rub it over then, season the top with the paprika, garlic and onion granules.

Pour the cider around the loin and place the pan in the oven; roast until the internal temperature reaches 160°F or for about 15-18 minutes per pound.  Remove the pan from the oven (remember that handle is screaming hot).  Carefully remove the stuffed loin to a platter and loosely cover with foil.  Let rest for at least 15 minutes.

Meanwhile, make the gravy.  Deglaze the pan with the white wine (and some additional apple cider, if desired) and toss in the shallots.  Add the espresso, and arrowroot slurry.  Stir and cook for a few minutes.  Taste and add the jelly or honey, if desired.  You may add some dried rosemary, thyme, parsley or sage, if you wish.

Carefully pour any accumulated juices into the pan, whisk and serve drizzled over the sliced meat, with some stuffing.  This is excellent with small potatoes, roasted cauliflower and pearl onions.

NOTE:  You may adjust the stuffing to your liking.  Stuffing for pork is excellent with herbs, onions, fennel and finely diced dried fruit (apricots, prunes, dates, cranberries and figs are good options).  The mixture should be moist but not soupy.  You may add some cider, as part of the liquid.  The gravy will be a bit bitter, as coffee tends to be.  I like to add some sweetness to balance that.  I used pepper jelly here, but I’ve use apricot preserves, orange marmalade, damson plum jam, honey, maple syrup, etc.  If you have a gluten issue, then omit the bread stuffing and use dried fruit, season the meat as directed and serve sliced, with the gravy.

As you know, The Goddess loves her cast iron skillets…it’s that burner-to-oven-to-burner thing.  Drizzle a bit of oil in the pan,

lay the loin cut-side up in the pan and top it evenly with the stuffing. 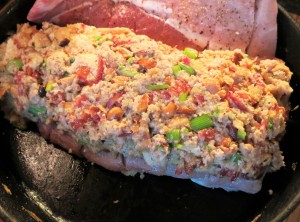 This time the stuffing consisted of finely minced onion, fennel fronds, sun-dried tomatoes, garlic, tangerine zest, sage, thyme, toasted almonds, salt, pepper, white wine and broth.  Oh, and some dried sliced mushrooms that are not joining us in Miami!  Mix that all up, let it sit in the bowl on the counter for at least 15 minutes.  Check and see if it needs more liquid.  You don’t want it to be soupy, but it should be quite moist.  So you’ve put the stuffing on the meat (cut-side up),

now lay the other loin on top of the stuffing, cut-side down.  Season the outside of the meat with the paprika, onion, garlic, and salt and pepper on it.  You can tie the two loins together, but I find this works well enough and the stuffing doesn’t squirt out the sides.  There’s nothing worse than having your stuffing squirt out, is there?  The pan goes into the oven and the meat will need about 15-20 minutes per pound, i.e., about 40 minutes for these pieces of meat.  The internal temperature should be around 160°F.  The meat will still be a bit pink in the middle and the juices may not run clear.  Pork can still be pink and be safe to eat, as the trichinosis nasties are killed at around 155°F.

Let the meat rest for at least 15 minutes.  Then when you slice the meat, it will be juicy, but the juice won’t be all over the cutting board.  It will have redistributed itself into the meat…by the way, this is true of all meats…they need to rest before slicing. 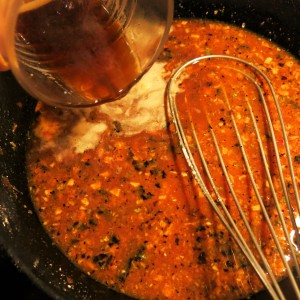 While the meat rests, deglaze the skillet with the wine.  Add the shallots, coffee and arrowroot slurry.  Simmer for a few minutes, taste and if you wish, add some sweetness to balance the bitterness that is an inherent quality of espresso.  I usually do this, as the cider isn’t that sweet.  I use whatever I have around;

tonight it was pepper jelly, but you may use apple jelly, honey, maple syrup or just plain sugar. 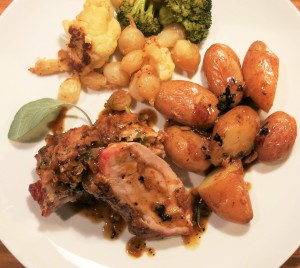 Slice it and serve it up…sit, pour yourself a glass of wine and dive right in!  This would have been their perfect birthday dinner…MMMMM…pure comfort…and Happy Birthday!