Just recently it was Key West shrimp season in South Florida.  These little beauties have an incredible flavor and texture.  And the bonus, they come the way they were created, with the head-on, feelers included!  They are just too fun, don’t you think?  We’ve been eating these babies every which way we can before they disappear, because I understand they are seasonal.  So when it’s the season, we’re all over these tasty morsels.  Before we cook anything, these shrimp need to be cleaned, and here’s what that looks like.  Now most of the time, when you’re going to be working with shrimp, they will have the heads removed and many times, the shells will already be slit down the back and the little intestine removed.  These are usually frozen or frozen and thawed, you know, like the kind you get at the supermarket and many fish markets.

As you can see, that’s not the case with these.  With this type of shrimp, you simply twist the head and body in opposite directions, and the head will come right off.   Do NOT throw those heads and shells out, because we’re going to make shrimp stock, so just toss them into a heavy-bottomed pan for later, like in the picture.  Now pull off the shell and the legs 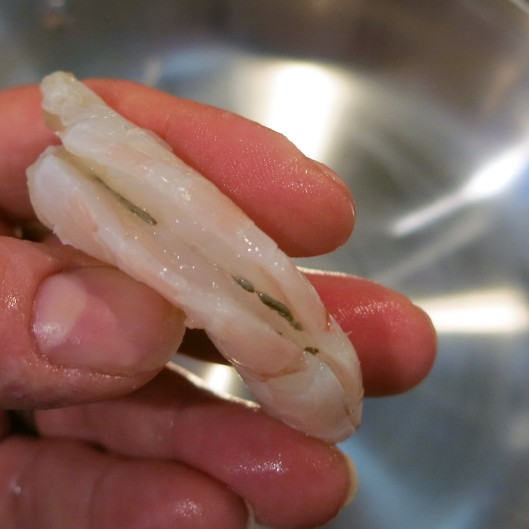 and make a slit all the way down the back to the end.   You’ll want a nice sharp little knife with a good point.  See the intestinal vein?  You’re going to remove it.

Just slip that point of the knife under the vein and then just pull it out.  If it breaks, we’re not going to have a melt-down…just put the shrimp under some running water and the water will wash away the nasties.

See.  Now you have a nice clean shrimp ready to cook.

This video from Food Network walks you through the process.  Or this one with Gordon Ramsey. Either one will explain the process perfectly.  And if you are a visual person like The Goddess, you’ll appreciate that whole “a picture is worth a thousand words” thing (or at least a few hundred).

Just one more thing…if you’re planning on serving a shrimp cocktail, please tear those damn tails off and give people a fork.  That leaving the last section of shell and the tail on makes me crazy.  And you know that on any given day, that’s a really short trip for The Goddess.  So don’t contribute to her downfall, please.

So here are the cleaned shrimp.

Put those shrimp in the fridge if you aren’t using the within the next 30 minutes.  They’re pretty perishable.  Now, make your stock. 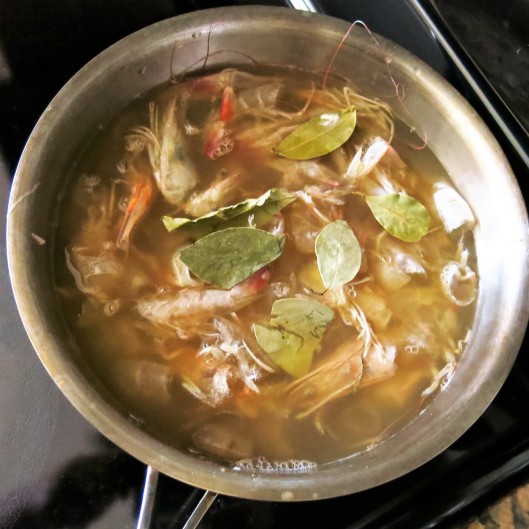 Add a couple of bay leaves and/or some pickling spice, a few peppercorns and cover the shells/heads with water by about 3 inches.  Bring the mixture to a boil over high heat, partially cover the pot and simmer over low heat for about 30 minutes. Using a spoon or a ladle, make sure you skim off and pitch any foam that rises to the top.  I used the stock as is, but if want a more intense shrimp flavor then run it through the blender, shells and all.  You’ll want to let the mixture cool a bit first, then working in batches, put everything—shrimp bodies, and liquid into a blender and whirl it up until it’s completely puréed.  Do pitch the bay leaves and pickling spices out first, though.

Now, just pour the stock through a ﬁne mesh strainer and into a large bowl.  You’ll want to push on the solids in order to get as much flavor as possible; discard the solids.  Cool the stock completely before storing in the refrigerator for 2–3 days, or in the freezer for up to a month and it does freeze well.

This is a super concentrated stock I made.  I did the whole cooking and whirling process with 3 different batches of shrimp bodies, using the last broth I made each time I added more shells/water.  I just added additional water until the bodies were covered by about 3-4 inches.  If this doesn’t make sense, let me know and I’ll try to explain it better.

That’s all there is to cleaning shrimp.  By the way, The Goddess wants to make sure that you realize there’s absolutely nothing wrong with purchasing frozen shrimp, as they freeze beautifully.  And it’s sort of a luxury to have a bag in the freezer when the mood strikes you.  But no matter, save the shells, etc., to make a shrimp broth.  That’s it for today, but tomorrow, we cook!