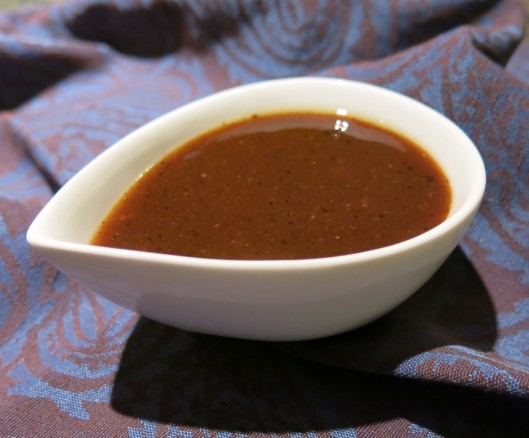 Here’s an incredibly good fall and winter vinaigrette…it’s served hot!  It is great on a spinach salad with some dried cranberries, nuts and feta or bleu cheese.  I got the basic recipe for the vinaigrette (I’ve changed it over the years) from Sarah Leah Chase’s book Cold Weather Cooking.  I highly recommend this book; it is without a doubt one of the best cookbooks ever.  I think you can still buy it…it’s worth every penny.  Anyway, I’ve been making a version of this vinaigrette for years now, but then it struck me how good this would be on a slaw.  Since you toss the salad with the hot vinaigrette, the greens would hold up better…it was a win-win.  So here it is.

First, we’re going to make a reduction.  We’re reducing apple cider, i.e. we’re boiling out much of the water and leaving behind a concentrated apple flavor.  This picture is at about the half-way point, because I forgot to take a picture at the beginning!  It works best to use a shallow skillet; this is a 14-inch pan…it’s that whole surface area thing…very scientific. 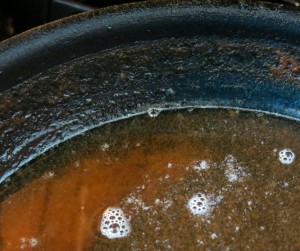 It will take about 45 minutes or more to reduce an entire gallon of apple cider to a mere 2 cups!!  The reduction will thicken as is cools; it keeps well and you’re going to make this vinaigrette again and again.  So when you have a lazy afternoon, why not boil down 2 gallons?  You’ll have 4 cups of reduction which you can add to soups, sauces, stews, etc. or freeze it in ice cubes so you have small portions to use.  You can skim this, but I don’t worry about that, as I think it contributes from a flavor standpoint.

In a small bowl, combine the dried shallots, water and balsamic vinegar; set aside for at least 10 minutes.

Meanwhile, place the cider in a small saucepan; boil until reduced to 1/2 cup, about 15-20 minutes. Set aside.

Heat a medium skillet over medium-high heat; sauté the bacon until just crisp. Drain on paper towels; set the bacon aside.  Discard all but 3 tablespoons of the fat remaining in the skillet.

Add the reconstituted shallots and any liquid to the skillet; sauté over medium heat until softened, about 2-3 minutes. Whisk in the spice, mustard and maple syrup (begin with the lesser amounts of each); cook 1 minute more.

Add the cider reduction, and slowly whisk in the olive oil; season to taste with salt and pepper. If using immediately, keep warm while you toss the salad. Toss while the dressing is hot and serve immediately.

Look at how thick the cooled reduction is.  Whisk away….

COOK’S NOTE: For the slaw I use a combination of finely chopped Savoy cabbage, kale, broccoli florets (if I have a large stalk, I peel it and shred it), diced apples or pears, dried cranberries or cherries, crumbled bacon (from above) and toasted pecans. The dressing can be prepared up to 3 days ahead and refrigerated. To serve, reheat in the microwave, on 50% power, until hot. You may need to re-whisk it to recombine the ingredients.

The Spice Mill has a great Pumpkin Pie Spice, but I usually make my own, as I only use a small amount during the season and the amount below works well for me.  My version has more allspice and I use Vietnamese cinnamon instead of regular.

Combine in a small bowl until well mixed; store in a container with a tight-fitting lid.  Don’t forget that this is also very good sprinkled over sweet potatoes, on pork, winter squash and it’s decent on popcorn!  Makes about 1/2 cup. 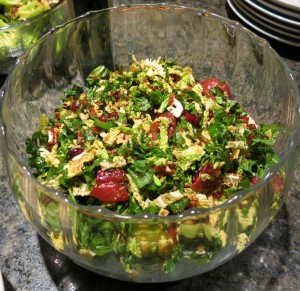