With autumn deeply upon us, cozy, comfort food is so welcome.  For the Goddess, dumplings are a homey-comforting-cold-weather sort of meal.  These are not the meat-filled Asian variety, nor the biscuit-type Southern variety, nor the firm German potato dumpling.  No, these are the light, fluffy-type of dumplings.  A cloud of goodness sitting atop a mound of, in this case, beef stew.  These dumplings are surprising, bordering on shocking, to most people who are expecting a lump of firm-textured, almost potato-like consistency.  No, my friends, these are light, fluffy cloud-like bites of goodness.  My mother plopped them atop chicken stews, beef stews, venison stews…if there was a stew, and you should think gravy here, then these were an option.  Sometimes she added herbs, but usually they were just served plain, as a sponge of sorts, to sop up the gravy.  And there’s nothing wrong with that.

As you know by now, The Goddess likes to share food stories with you.  She feels strongly about this…food or meals, much like life, should have stories attached to them.  It’s a memory, and in this case, a damn fine recipe.  Soooo…my father was helping a neighbor do some hideously, labor-intensive work, and when neighbors help each other out in rural areas, they are served dinner.  In our rural community, dinner is the mid-day meal.  Supper is served at night.  Anyway, Mrs. Henline was a fine cook and she served chicken with these dumplings.  Now, my mother and grandmothers were excellent cooks, but these dumplings were a thing of beauty, the Holy Grail of dumplings and my father mentioned this to my mother, who promptly asked for the recipe.  Now in rural communities, back in the day, and the day was probably in the late 1930’s, when you asked for a recipe, it would have been unheard of to be told, “No”.  The cook was flattered and wanted to share, and share, Mrs. Henline did.

These are the dumpling of my childhood.  These will be the dumplings you will make and share with the ones you love.  You’ll share the recipe too, won’t you?  Please do.

About 20 minutes before you wish to serve, combine the flour, baking powder, and salt in a medium bowl; add chopped fresh herbs, if using. Pour the milk into the dry ingredients and mix just until the mixture comes together (I use a rubber spatula for this).  DO NOT over-mix.

There are a couple of things to remember so your dumplings will be a thing to behold, then gobbled up.

Do not over-mix the batter.  It goes together incredibly quickly and you just want everything combined.  Next, when dropping the dumplings, that’s why these are also called “Drop Dumplings”, rather than the rolled-out-and-cut-type…much easier.  Anyway, when you are ready to drop the batter on the gently simmering stew, 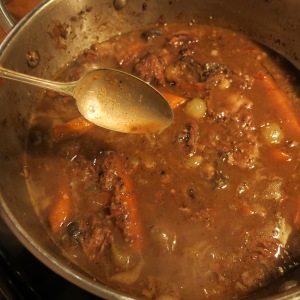 Then just keep dipping and dropping the dumpling about 1/2-1 inch apart on top of the stew,

until the stew is covered.

You’ll cook them uncovered for 10 minutes, 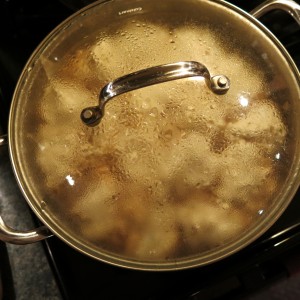 then covered, no peeking please, for 10 additional minutes.  I made this stew the day before I was going to serve it, reheated it and then dropped the dumplings just before serving.  You will want to serve the dumplings almost immediately after you cook them.  They can be removed to a platter and the gravy/meat mixture can be spooned over the top or served on the side.  The Goddess serves hers right in the pot she makes them in…simpler.  She prefers smaller dumplings, rather than larger, which have more of a tendency to remain a tad raw in the center. 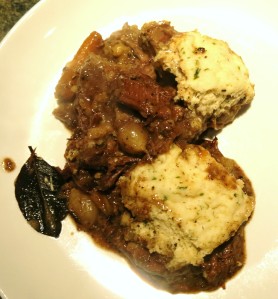 Besides, you can have 2 this way…and you’ll want to devour 2…at least!