Last year I shared my recipe for one of The Spicy Honey’s favorite dish, Boliche, the Cuban version of pot roast, with cubes of good things stuffed in the middle of it.  This isn’t that.  Boliche is wonderfully tasty; it is using the eye of the round.  But, I have a chuck roast.  So why, The Goddess asked herself, not make pot roast, using the same ingredients, just not stuffed into the hunk of meat?  This is a very easy meal, but it takes time, as the meat needs to cook ever so slowly until it becomes so tender you can cut it with a fork.  I love pot roast and The Spicy Honey loves boliche…so this seemed like a natural “translation” of the traditional dish.

Maybe you’ve had a better experience than I, but I’ve never been that taken with eye of the round, as a cut of meat.  It’s way too dense, has almost no marbling and is much more difficult to cook properly as it has a tendency to dry out.  But, not so with a chuck roast.

It has plenty of fat to help keep it moist and juicy and has a much more “beefy” flavor than the eye of round.  The key with both of these cuts of meat is low, moist heat.  I do stove-top pot roasting most of the time, but truthfully I think oven pot-roasting, at about 300°F, produces a better textured roast.  I think it’s the fact the heat surrounds the pot completely, so it cooks much more evenly.

or chorizo (the cured kind, not fresh),

pearled onions, bell peppers and green olives.  See, this is where the “deconstructed” part comes in.  We just put these things in the sauce, instead of inside the meat, giving us a lovely, chunky, incredibly flavorful sauce in which the meat simmered and soaked up all the goodness.  I added some espresso; it is, after all, the elixir of the Cubans, their life-blood.  It also adds richness and enhances the umami-ness of the sauce.

Now, since there is no nice, heavy Dutch oven to work with here in Florida (they’re back in CT), The Goddess improvised.  Sometimes Goddess’s need to do that, you know.  She simply covered one skillet with another skillet. 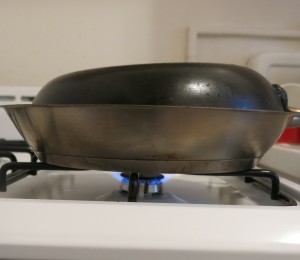 It lets just a bit of steam escape, but still keeps most of the moist heat in the pan.  Hey, it works, even if it doesn’t look terrific.  Notice too, that this is the smallest burner; the flame was just enough to keep the liquid just barely moving…no violent bubbling.  Once you brown the meat, you could then cook this pot of deliciousness in a slow-cooker, about 6 hours on LOW, should do it.

This took about 2 1/2 hours to finish cooking completely.  If you’re cooking for one or two, it makes sense to make a 3 pound roast.  Yes, there will be leftovers…anyway, there are usually leftovers, but that’s a good thing.  See the “leftover options” at the end of the recipe.  The Goddess loves leftovers…so many possibilities.

Hear the oil in a heavy deep skillet or Dutch oven over medium-high heat.  Season the roast with salt and pepper and drop the meat into the pan (don’t actually drop it or the hot fat will burn you!!).  Lower the heat to medium and DO NOT move the meat for at least 2 minutes; you want the roast to have a nice brown crust; it may take more time.  When the meat is nice and browned, turn the meat and again, leave it alone.  Don’t move it.  Let it brown.  Then, remove the meat to a plate.

Place the sliced chorizo (or diced ham) in the pan.  Sauté until they begin to color slightly, about 2 minutes.  Add the onions and peppers; continue cooking until the onions pick up some color, about 3 minutes.  Stir in the bay leaf and spices.  Deglaze the pan with the wine and coffee.  Let simmer for 1 minute.

Return the meat to pan, spooning some of the liquid over the meat.  Cover the pan, lower the heat to keep the liquid just simmering.  Cook the meat, turning the meat 3-4 times during the cooking process, until the meat is fork tender, about 2 hours.  Add the olives (or alcaparrado) during the final 15 minutes of cooking.  Remove the meat to a large, deep platter and keep warm.

Make the mojo while the meat cooks; set aside until serving time.

Slice the meat into thick, 1/4-inch slices.  Serve with some of the sauce and “stuff” over the meat.  Serve with the Mojo, if desired.

For leftovers:  Optional 1:  Shred the meat, combine with some of the “stuff” and reheat.  Roll into either flour or corn tortillas and top with shredded cabbage, sour cream and some of the mojo.  Option 2:  Shred the meat and make a Cuban sandwich using Cuban bread (or Italian bread) that is spread with Dijon mustard and horseradish, some of the shredded beef, the meat/vegetable “stuff”, cheddar cheese slices and dill pickles.  Grill in a panini grill until the outside is crispy. Option 3:  Heat 3 cups beef broth until boiling.  Lower the heat and add 1 can drained hominy, 1 small can diced green chiles, and bring to the simmer; cook for 3 minutes.  Add 1 cup shredded beef and cook until heat through.  Serve with a dollop of sour cream and finely chopped fresh cilantro.

I like the sauce to be ever so slightly thickened, but that’s up to you.  It also depends on what you’re going to serve this with.  With mashed potatoes or boiled yuca, slightly thickened works better.  With rice, it’s less important.

We enjoyed this with boiled yuca, Tropical Slaw and Cuban bread on the side.  You have to have something to mop up that sauce, baby.  That’s really the best part of any pot roast, don’t you think?

One last thing, just to be clear, “Boliche Destruido”, which translates literally to “Deconstructed Boliche”, may not be that accurate.  The Spicy Honey was no help whatsoever…can you believe it?  What’s that about?  So for any native Spanish speakers, I apologize if that doesn’t really work as a proper translation…it is what it is.