This concoction of leftover Thanksgiving dinner has been in my life since, well forever.  We usually had duck and/or goose for Thanksgiving, sometimes a pork roast, but rarely a turkey.  But, we always had stuffing (or dressing) and lots of it!  It isn’t that we had anything in particular against turkey.  Turkey needed to be purchased, so why would you do that, when we raised both ducks and geese?  Besides, we loved goose and duck and my mother knew how to roast them.  I can still taste them, though I rarely make either.  She didn’t do any of the rare duck or goose.  No, this was moist and falling off the bone, but not terribly greasy, as both of these wonderful creatures can be.  Of course, she saved every ounce of the fat from either one.  Eggs fried in duck (or goose) fat are a thing of beauty.  A rare and fantastic treat to be savored and enjoyed to the max.

She would put this together using leftovers.  It usually involved leftover gravy as the “sauce”, to which she would add a little stock to thin it.  If there was no leftover gravy, then just good stock thickened with cornstarch was what we used.  Usually there would be leftover green beans, carrots, sometimes rutabaga or peas…whatever was our vegetable.  And if there were no leftover veggies, then she would throw some frozen peas and shredded carrots in.  The topping was usually leftover stuffing, or dressing.  We didn’t stuff the bird, but cooked it separately, so it was dressing.  Sometimes it was mashed potatoes, but we usually didn’t have enough of those leftover, no matter how much she made.  Duck gravy and mashed potatoes…mmmmmmm…give me a minute to compose myself!  Okay, I’m back.  Anyway, if there was leftover duck (or goose) and some pork, mother used both.  She would usually added some additional sage and parsley.  I use herbes de Provence or tarragon.  Those weren’t flavors we were aware of when I was a kid.  If she had pearl onions leftover, in those went, too.  You’re getting the idea here, right?  She used what she had and added some things she didn’t have. 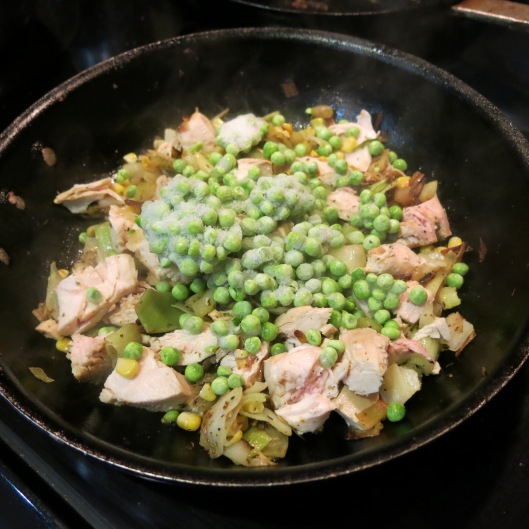 This version has leeks, peas, celery and turkey with a stuffing crust.

I used some gravy, but I added a bit of extra broth, as I wanted to thin it out a bit.  You just want to bring the mixture to a simmer; the turkey is already cooked, so you just want to cook the starch until it thickens properly.

I divided the mixture in half, then divided between two miniature pie plates. 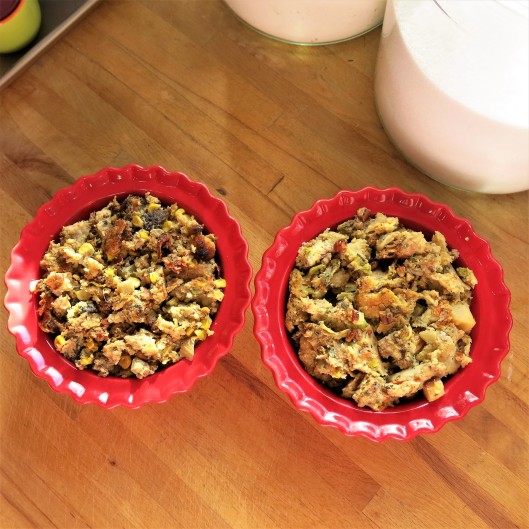 Then, crumble some of the stuffing over the top of each pie.  I made both the Savory Cornbread Stuffing with Fennel, Leeks and Mushrooms and the Bread Stuffing with Leeks, Celery and Herbs with a Browned Butter Drizzle, and since I made two individual pot pies, I put one version on each pie (the cornbread is on the left, the bread stuffing is on the right).

I tossed in a few dried cranberries into the version with the Savory Cornbread Stuffing on top. Now, you may either cook these in the microwave to just heat them through or you can heat them in a 350°F for about 20 minutes or until the pie is heated through and the topping crisps up.  If you have a house full of people, feel free to make this in a larger casserole dish and serve it buffet style.

I have, on occasion, placed mashed potatoes or mashed sweet potatoes in the bottom of the dish, topped it with the “turkey pot pie mixture” and then crumbled the dressing over the top and baked the whole mess up.  And, I’ve even poured cornbread batter over the mixture, then baked it until the cornbread was done.

As you can see, I’m not giving you amounts, as I know you’re smart as a whip and you don’t need me to spell this out for you.  You can be creative and make it however your little heart desires.  I’ve even been know to make chicken, just so I can have leftovers to make this.  Enjoy your weekend.