Gravy is a thing of beauty.  It can turn a pretty ordinary piece of meat or potato into a blessed event.  Remember, it’s all about the sauce!  Gravy is defined as: “a sauce made from the thickened and seasoned juices of cooked meat”.  Simple enough, right?  I know I posted a “primer” of sorts on how to make gravy employing a roux, i.e., flour and fat cooked together, then hot liquid is whisked into the roux.  I also know I’ve posted recipes for sauces using either a cornstarch, rice flour or arrowroot slurry, i.e., any of these starches, stirred into cold water, then added to hot liquid.  This latter version is gluten-free, so I do try to use this, as I know some of you have issues with gluten.  This is the gravy we’re going to make today.

Bacon is so delicious it should be a food group unto itself.  I had some nice, thick bacon, so I cut the slices into about 1/2-inch pieces.  A nice hot skillet over medium high heat, toss in the bacon and fry it, stirring now and again, so as to help it brown evenly; it takes about 4-5 minutes, but you really do need to watch it.  Burned bacon doesn’t do squat for gravy!  Using a slotted spoon, pull the bacon out and drain on paper towels.  Pour off all but about 2 tablespoons of the fat.

I tossed in some sliced mushrooms and added some finely minced onion.  You could certainly use shallots or leeks; either would be a wonderful choice.  So you’re going to sauté these until they pick up some color and give off their liquid, which will help loosen the fond from the bacon…flavor.  Lots and lots of flavor.

I deglazed the pan with some broth, wine or Marsala and leftover pan juices from the Florentine Roast Pork.

About those juices, I poured the juices left in the skillet into a deep bowl, let it chill, which allows the fat to solidify, which allows you to just lift off the fat.  This juice was from a pork butt, so there was quite a bit of fat, about 3/4 cup, which I “peeled” off and pitched out.  The drippings had congealed, so the flavor was pretty concentrated…a good thing.  It’s this “broth” I use to make my slurry (what bizarre path did my little brain head down right there?).

For my thickener, I used arrowroot.  I’m going to freeze some of the pork with the gravy for The Latin Lover, while I go to the wilds of Connecticut for a few weeks.  The man needs to eat and he may as well eat well.  Arrowroot, unlike flour and cornstarch doesn’t “freeze out”.  With either flour or cornstarch, freezing breaks the thickening bond, so the gravy becomes watery and runny.  But, freezing doesn’t affect arrowroot; the bond remains in tact.  It also adds a nice glossy finish to a sauce, which I rather like.  You know how The Goddess is attracted to shiny things….

Stir the arrowroot into the cold liquid, until it more or less dissolves.  You’ve made a slurry.  Pour the slurry into the already bubbling broth, stirring as you add it.  Continue to cook until the mixture thickens, allowing it to simmer for 3-4 minutes to cook off any raw taste. 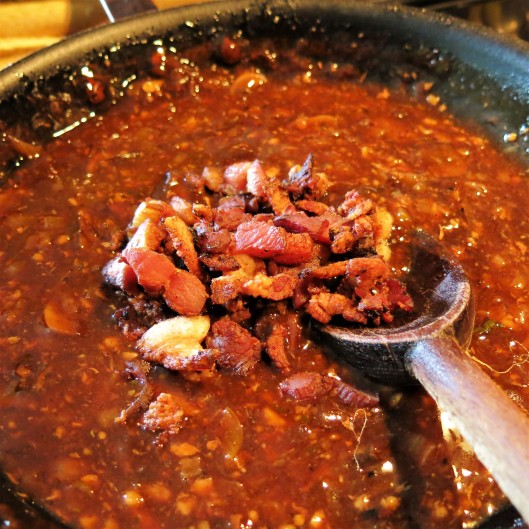 Add the bacon, Marsala, if you use it, and it’s ready to serve.  It takes less time to make this gravy than it does to read this post!

Keep in mind that these are pretty close to the amounts I used, but I just “make” gravy.  Accurate measurement isn’t all that important, but do taste as you go.

Mushroom-Bacon-Marsala Gravy for Pork (or Beef)

Heat a skillet over medium-high heat.  When hot, add the bacon.  Fry, stirring frequently, until the bacon is nice and brown.  Remove with a slotted spoon to drain on paper towels.  Pour off all but about 2 tablespoons of the bacon fat.

Add the mushrooms and onions.  Sauté until the mushrooms become limp and the onions is slightly translucent, about 3-4 minutes.  Add the garlic; sauté for an addition minute or two.  Pour in the beef broth and Marsala, scraping up the browned bit from the skillet.  Bring the boil, lower the heat and keep at a rapid simmer.

Stir the arrowroot, into the cold pan drippings, stirring until somewhat dissolved.  This is a slurry.  Give the slurry a good stir; pour it into the simmering gravy, all at once, stirring until combined.  The mixture will start to thicken, as it begins to simmer again.  Let simmer for at least 3-4 minutes.  If the mixture isn’t thick enough, just stir 1 teaspoon of arrowroot into 2 tablespoons water and add it slowly.  Stir and continue to simmer until you get the consistency you want.  Taste and correct the seasoning, adding the honey, if you want more sweetness.  Stir in the reserved bacon and Dijon mustard, if using.  The gravy is now ready to bathe meat, potatoes and whatever your little heart desires.

If you find the gravy is too sweet, then add 1-2 teaspoons apple cider vinegar, balsamic vinegar or lemon juice…it’s about balance.

6 thoughts on “Mushroom-Bacon-Marsala Gravy for Pork (or Beef)”