The original recipe is from Southern Living Magazine.  But, we were introduced to this delicious dish at a friend’s house.  These are the kinds of friends you want to have!  We came almost an hour late and they still fed us.  And Laurie shared the recipe…a good friend, indeed.  We don’t use orzo enough.  At least, I don’t.  But that will be a changin’!  This is a relatively straight-forward recipe.  It takes a bit of time and attention, but only a bit.  Laurie changed the recipe to suit her, i.e. added a diced summer squash and she does most of the cooking on top of the stove.  Then at the very end, slides the pan under the broiler to cook the shrimp and crisp the panko mixture.  I kept those.  Cooking on top of the stove works well for her, and it worked well for me.  And the squash is a nice addition.  The most significant change I made, was I toasted the orzo.  It gives the final dish a subtle, nutty flavor.  You can do this part earlier in the day, then finish it just before you’re going to serve it.  I also added some white wine to the broth and I used more lemon zest. 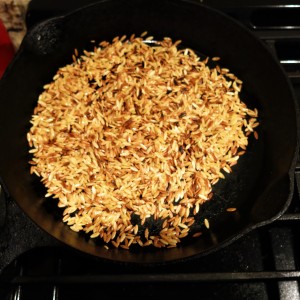 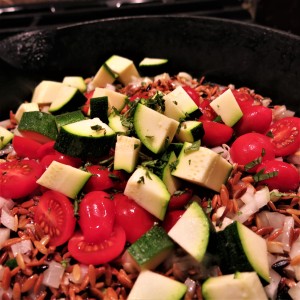 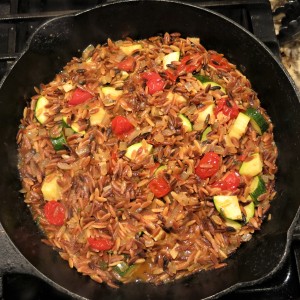 To toast the orzo, heat butter and oil an oven-proof skillet (cast iron is perfect) with a lid.  Add the orzo and stir it around.  You want it coated with the fat.  Lower the heat and continue to stir frequently until about half the “grains” are lightly brown.  I left it in the skillet and continued with the recipe.  But, I won’t do that again.  I will remove it from the skillet and set it aside.  The orzo browned more than I wanted; it wasn’t burned, but aesthetically it will be nicer next time!   Add the onion and garlic; sauté that a bit, then add the tomato, zucchini, oregano and salt and pepper.  Sauté for about 5 minutes.  This is where I would add the reserved, toasted orzo.   Lower the heat, add the broth mixed with the wine; cover the skillet and simmer until the orzo is tender and most of the liquid is evaporated, about 12-15 minutes.  Also, I needed to add a couple of extra tablespoons of broth.

While this cooks, combine the panko, parmesan, and oil.  Season the shrimp with oil, salt and pepper.  When the orzo is just tender,

place the shrimp evenly over the it, then sprinkle the crumb mixture evenly over the shrimp.  Slide the uncovered pan under the broil; broil until the shrimp are done, about 4 minutes.  Watch it carefully and have a piece of foil at the ready.  If it becomes too brown, simply slide the foil over the top; don’t seal it.  Just place it on top of the skillet.  Remove from the oven and serve.

You could serve it directly from the skillet, but cover the handle well, so no one get burned!

Just a thought here, but next time, and there will definitely be a next time, I’m going to toss the shrimp with some Cajun seasoning.  I think that will be delicious.  Also please note, I made half the recipe.

Place the oven rack 5 to 6 inches from heat source.

Over medium heat, heat 1 tablespoon of the oil and the butter, in a large ovenproof skillet with a lid. Add the orzo; stir to coat well.  Sauté, stirring very frequently until the orzo is about half toasted, about 3-4 minutes.  Remove from the skillet; set aside.

In the same skillet, add the onion and garlic; cook until translucent, about 5 minutes. Add tomatoes, oregano, zucchini, 3/4 teaspoon salt, and 1/4 teaspoon pepper; cook until tomatoes are softened, about 2 minutes. Stir in broth, the wine and the toasted orzo; bring to a boil, stirring occasionally. Lower the heat, cover and simmer until orzo is tender and the liquid is mostly absorbed, about 15 minutes. I stir it a couple of times just to make certain it isn’t sticking.  Preheat the broiler.

While the orzo is cooking, combine panko, Parmesan, butter, and lemon zest; set aside.

Toss shrimp with remaining 1 tablespoon oil, 1/2 teaspoon salt, and 1/4 teaspoon pepper; arrange shrimp on top of the orzo.  Sprinkle the panko mixture over shrimp and orzo. Place under the broiler; broil, uncovered, until shrimp are opaque, 4 minutes and the panko is toasted.  Watch carefully so the crumb don’t burn.

The original recipe can be seen here.  Enjoy!