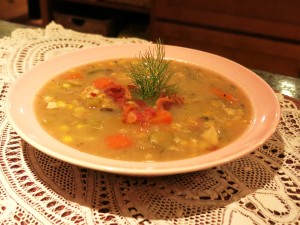 Corn chowder can be served as is…a soup that focuses on corn, creamy or brothy, herby or not, etc.  Or it can be the base for clams, salmon, seafood, chicken, ham, etc.  It’s a very versatile meal.  Have corn chowder on Monday and with just a few additions, clam chowder on Wednesday.  Chowder can be thick and creamy or clear and brothy.  You can have a simple vegetable chowder, clam chowder, salmon chowder, add ham or kielbasa and bacon, always bacon, at least for us.  You know, The Goddess feels that bacon should be a food group unto itself!

Cook bacon in large saucepan over medium heat until crisp. Transfer bacon to paper towels to drain; set aside for later use.  Discard all but 1 tablespoon drippings from pan. Add the onion, carrots, celery, fennel and mushrooms, if using; sauté until vegetables are crisp-tender, about 5 minutes.

Add liquid; toss in the bay leaf and parmesan rind, if using. Add potatoes and herb(s). Bring to boil; reduce heat to low and simmer until potatoes are tender, stirring often, about 15-20 minutes.

Stir in the both types of corn; thin with broth or cream to desired consistency. Reheat until piping hot; season to taste with salt and pepper.

Divide soup among bowls, sprinkle with the bacon and parsley or dillweed, and serve hot, with oyster crackers or good bread.

NOTE: This soup, as is, is a vegetarian soup.  However, you may add 2 cups (about 1 lb) chopped clams, diced chicken, diced ham, salmon (raw or cooked), diced kielbasa OR a mixture of seafood (scallops, shrimp and salmon, for example) to the mixture with the corn. Add raw chicken with the potatoes; add raw clams (or salmon) the last 5 minutes of cooking; add cooked meats/poultry/seafood with the corn.

This soup is a meal.  It has vegetables, protein and dairy (if you wish) and if you add crackers or bread, starch.  It’s pretty straightforward to prepare, 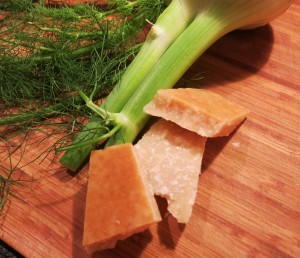 but first there are a couple of things we need to talk about…parmesan rinds and fresh fennel.

First, parmesan rinds…buy them when you find them, because supermarkets don’t always have them.  Most good supermarkets will sell these in small containers for a couple of dollars. Don’t tell anyone else about this, or the rinds may fly off the counter and you and I won’t be able to find them!  Let’s be selfish, okay?  Another thing to remember, Goddess’s aren’t always benevolent, particularly when it comes to parmesan rinds.  I’m talking about the pieces of “rind”, the very outside layer of the wheel of parmesan,  that’s leftover after the wheel is broken into pieces.  I love adding these to soups and stews.  Add a couple of pieces to the soup pot, let them cook or steep for awhile, and they will become softened and totally pliable.  Now, you’re supposed to remove them and toss them out.  Seriously?  Are you kidding?  NO, NO, NO.  Remove the larger piece(s) and dice it into pea-sized pieces and toss the bits back in.  It’s wonderful to bite into now and then; it just adds a loveliness to the soup/stew.  You can use parmesan rinds in any vegetable soup, but I do love it in chowder, even with clams or salmon. 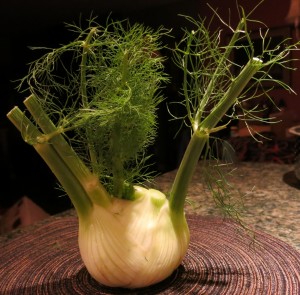 Secondly, if you don’t already use fresh fennel bulbs, you need to start.  Fresh fennel is terrific.  It has a slight anise (licorice) flavor, but when cooked, the flavor is very mild and there’s a delightful sweetness that comes into play.  Fennel is particularly delicious with salmon and pork.  If you would add celery to a soup, add fennel instead (or with).  The texture is similar, but the flavor adds a subtle, nutty sweetness.  At some future time, I will post some fennel recipes, if you are interested. 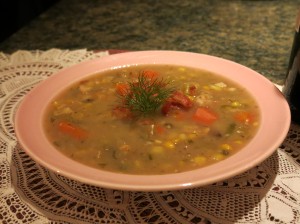 I decided I would leave this chowder brothy, not creamy, though the creamed corn does sort of give you that feeling.   It’s thick, but not gluey thick.  Another thing, puréed cauliflower  in a soup like this, adds a creamy quality, but without the significant calories of heavy cream. Though the recipe gives specific amounts, remember…recipes are suggestions, not chiseled in stone.  Add and subtract to your liking.  I gave you THE cornbread recipe…it’s the perfect accompaniment to chowders and chili!