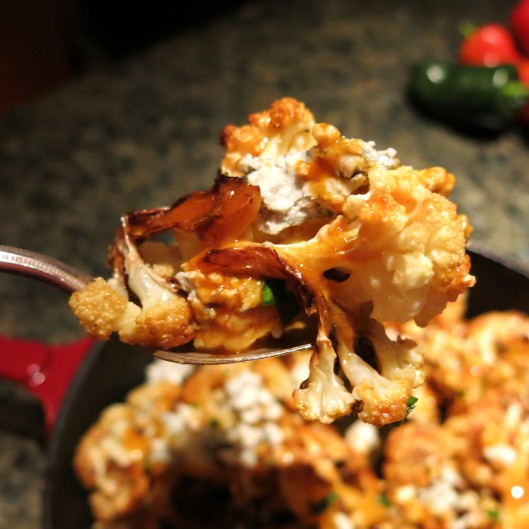 Buffalo-Flavored Cauliflower with Bleu Cheese…why didn’t I think of this before?  As you know, The Goddes is trying to divest her fridge of its belongings, and there was this bottle of Frank’s® Hot Sauce that’s been lurking, hiding behind the jars of capers, olives and pickles, right there on the door.  And sitting right there on the shelf was a piece of bleu cheese…you see where she’s going here, right?  She had this nice head of cauliflower and that’s when the light went out…yeah, she closed the door and walked away.  But then, like a bolt of hot lightening (is there another kind?), she thought about putting all those goodies together.  Oddly, this turned out to be a good thought. Cauliflower is such a blank canvas for other flavors.  It’s has a back bone of flavor all its own, but it lends itself so freely to absorb other flavors. It even enhances other flavors, you know, sort of like a nice scarf can make an outfit.  I have been roasting or grilling cauliflower “steaks” all summer long.  You’d think I would be sick-and-tired (notice how they always seem to go together…hmmm?) of it by now, but for some reason, it never happens.  Cauliflower is such a versatile veggie, offering a vicissitude of variety for vittles!  God, isn’t alliteration fun? 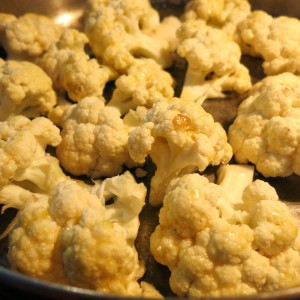 I had the oven on, so I hacked up half the head into large florets, drizzled it with a couple of tablespoons of the fat I skimmed off of the Cuban-Style Roast Chicken, which in all honesty I had intended to pitch out.  The fat, not the chicken.  But, I thought, why not…I mean really, why not?  There’s some good and real flavor there and those flavors should go well with the cauliflower, which it turned out, they did! 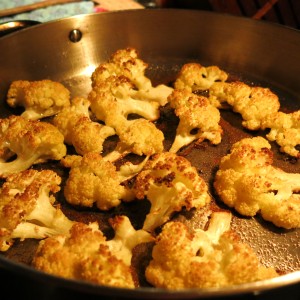 Look at the magic that a hot oven and a little fat produce.

Heat the oven to 450°F.  In an oven proof skillet or casserole (you want one that can be used on a burner), place the cauliflower.  Drizzle with the fat, sprinkle with the garlic granules, salt and pepper.  Toss it all together until the cauliflower is well coated.  Turn the cauliflower pieces, cut-side down in the pan.  Place the pan in the oven (you don’t need to wait until it’s completely heated) and roast until browned and just tender, about 30-35 minutes.

Remove from the oven and take the cauliflower out of the pan and set aside.  Add the sriracha, hot sauce, water and honey to the pan.  Bring to the boil and simmer for a couple of minutes.  Turn of the heat and whisk in the butter, as tablespoon at a time, until each is almost melted before adding the next.  Toss the bleu cheese crumbles on top of the cauliflower and pour the hot sauce over.  Sprinkle with chives, if desired and serve.  You can use this as an appetizer or a side dish and it’s pretty good at room temperature, too.

I don’t like to over-sauce the cauliflower; I want a nice, light coating of sauce. 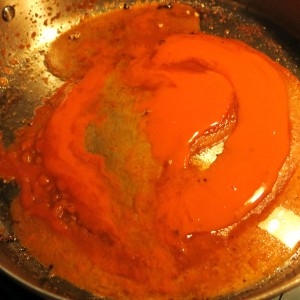 I add some water to the hot sauces and simmer about 1 minute, because I prefer the consistency this way; it’s just a little thinner allowing the sauce to seep into the cauliflower. 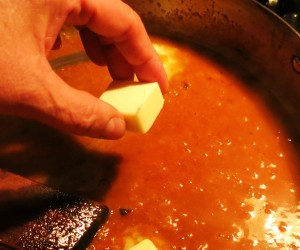 Then, stir in the butter, piece by piece. 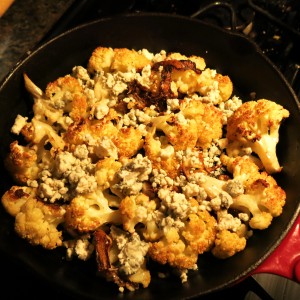 I sprinkle the crumbled bleu cheese on the roasted cauliflower first 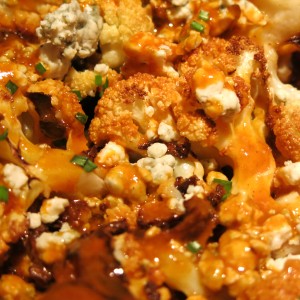 and then pour the sauce over the whole mess.  The hot sauce melts the cheese just a bit, and it looks good.   Sprinkle some chives over everything and dine divinely!  This was dinner; it was delightfully delicious…!