This is, at its heart, the shrimp bisque you’re familiar with.  But I was feeling the Carnaval vibe, given the time of year, and the shrimp looked so tasty, so I decided to jazz up the regular old bisque with some Brazilian flavors.  It worked.  And The Spicy Honey loved it.  Lent won’t be all about sacrifice, after all!

TIP:  This recipe uses tomato paste.  Purchase the larger size can, remove the top lid, place a freezer resealable bag over the top of the can, invert it and remove the bottom lid.  Allow the contents of the can to slip into the bag, shaking gently if necessary.  Press the seal on the bag, leaving at least one inch unsealed.  Then press tomato paste flat, until evenly distributed, about 1/4-inch thick.  Seal the bag completely.  Place flat, in the freezer and freeze until solid.  To use:  Just break off pieces, as needed.  It’s very simple to break.

In Bahia, which is in the eastern part of Brazil, where the slave ships would have landed first, the food is highly seasoned and quite spicy.  The Bahians make a shrimp dish called Moqueca de Camarão, which I’ll  have to make and post for you.  It is delicious and oooh! so Brazilian.  The closest thing we have is shrimp creole, but moqueca is quite different.  The seasonings are different and palm oil or dendê oil, is essential to the flavor profile.  Dendê has a very specific flavor, that really isn’t like anything else.

Anyway, as I said, this soup has it’s roots squarely in the traditional bisque category, but instead of potatoes, I added hearts of palm and rice.  Instead of cream, I added coconut milk (not coconut cream—that’s sweetened).  Instead of sherry, I added some rum, but that’s optional (but why wouldn’t you?).  And I added orange zest, lime juice and a healthy amount of cilantro.  I love cilantro, but if you can’t stand cilantro (what’s wrong with you?), omit it.  You could use parsley and/or basil and it would still be delicious, but not quite as delicious!  Whatever you do, don’t omit the orange zest.

I was able to find head-on shrimp, which I cleaned by removing the shells and deveining them. 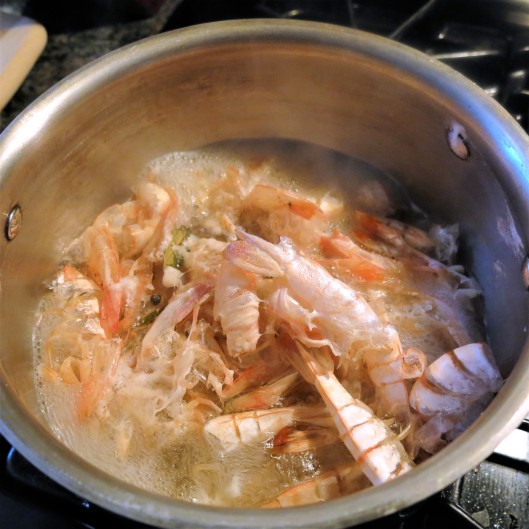 I tossed the shells into a pot, covered them with water and just simmered them for about 10 minutes.  Then, I strained the shells out, pitched them

I cut the cleaned shrimp into about half-inch pieces and set them aside.

I sautéed the leeks in butter over low heat, just until the leeks soften. 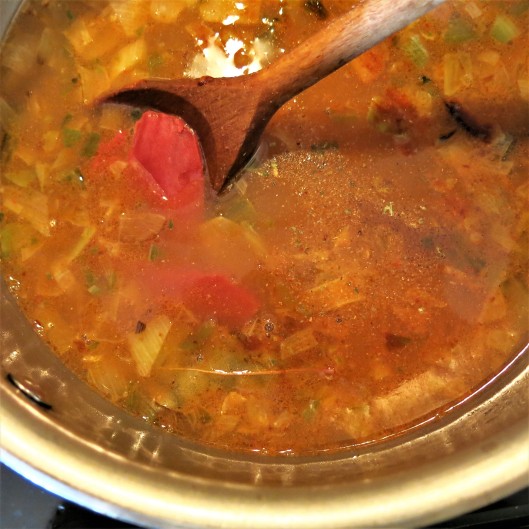 I added the bay leaf,  half the shrimp broth and stirred in the garlic, tomato paste, the roasted pepper and spices.  Simmer for 5 minutes. 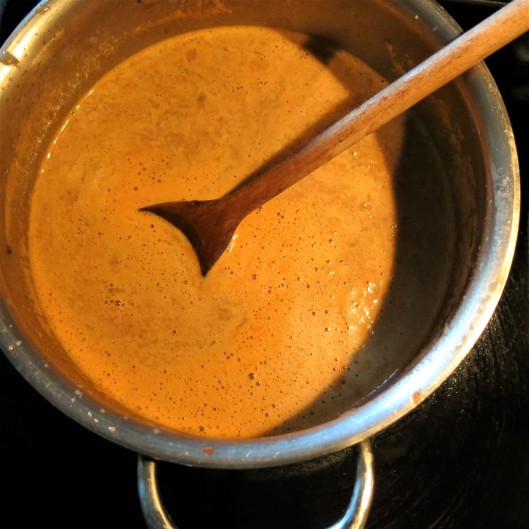 If you want a smooth soup, at this point, remove the bay leaf (don’t pitch it out—you’re going to add it back in after you purée) and purée it.  You can do this in a blender (not a food processor), but using an immersion blender right in the pot saves a ton of time and is just easier.  If you don’t have one, it’s a good purchase (here) to make.

Return the bay leaf to the pot, add the rice, orange zest, and remaining broth to the pot; bring to a simmer, giving it a stir now and then. Cook the rice for about 10 minutes; it should be almost done. Stir in the coconut milk, and the hearts of palm; return to a simmer and let it cook for a minute or two. 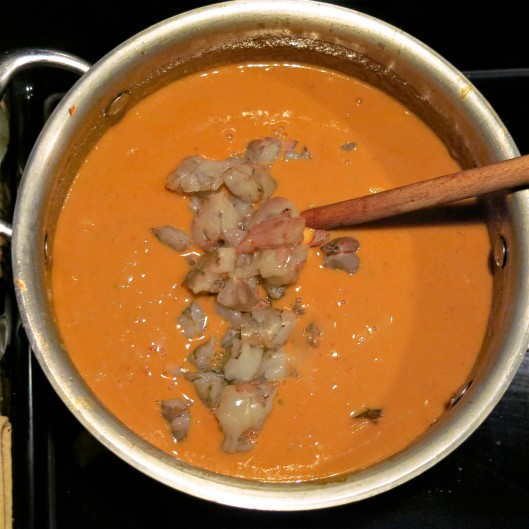 Now, stir in the shrimp. You’re really going to poach the shrimp in the soup, but watch them carefully so you don’t overcook them.  You need to stay in the kitchen.   Don’t wander off to the family room or outside, because overcooked shrimp are nasty little orbs of rubber band-like ick. 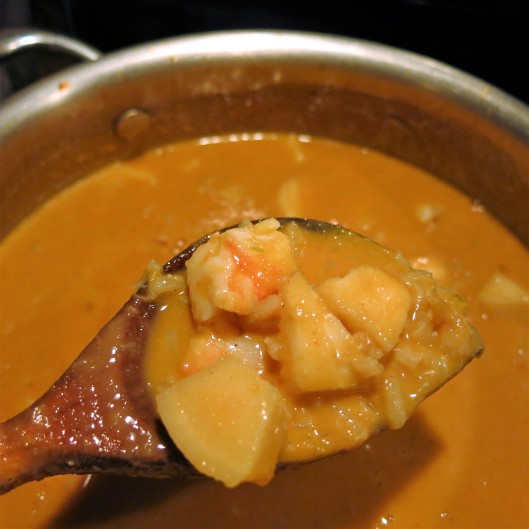 They cook very quickly.  It will take no more than 2-4 minutes, but check them after 2 minutes; you want them to be just done.  I cooked them for 3 minutes, but these were pretty good-sized shrimp. 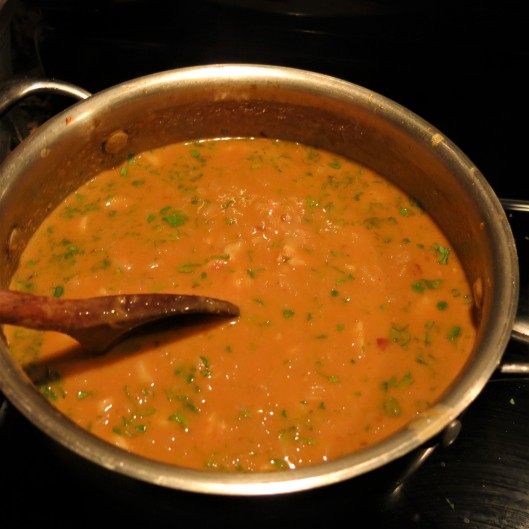 Stir in the black pepper, lime juice, and cilantro. I serve this in smaller portions, as it is pretty rich, even though you don’t use heavy cream.  And oddly enough, you won’t get much of a coconut flavor.  It’s more textural.

Serve with some good bread and maybe some cheese and enjoy!

In a large pot heat the butter over low heat. Add leeks, sauté until the leeks soften.  Add the garlic, orange zest, tomato paste and spices.  Simmer for 5 minutes.  Add the roasted pepper and half the shrimp broth.  Simmer for 1 minute.  If you want a smooth soup, at this point, remove the bay leaf and purée using an immersion blender right in the pot.

Add the rice and remaining broth to the pot; bring to a simmer. Cook until the rice is almost done, about 10 minutes.  Stir the coconut milk into the soup and hearts of palm; return to a simmer and then stir in the shrimp. Simmer gently (you’re really poaching the shrimp), stirring occasionally, until the shrimp are just done, 3 to 5 minutes. Stir in the black pepper, lime juice, and cilantro.

Serve with good bread or cornbread.

NOTE:  You may wish to add a handful of bay scallops, when there is about 2 minutes of cooking time left.  If you prefer to use potatoes, you should add them with the rice.

This is inherently gluten free, and if you want to make a vegetarian version, add a can of rinsed and drained garbanzo beans, instead of the shrimp (or along with the shrimp!).

If you wish to make this ahead, please do.  The flavor will be better, but don’t add the shrimp until you reheat the soup.  Reheat over low heat, then add the shrimp, but don’t boil it.  This is a lovely dinner party starter and a great way to kick off Lent.