Snert!  Have you heard of it?  This was new to The Goddess.  It seems that Snert is a big deal dish for the Dutch; it’s their version of split pea soup.  But, it doesn’t matter, because it’s just too fun to say, isn’t it?  Well, it got me thinking.  How many cultures have a version of split pea soup?  It turns out, most do.  This is The Goddess’s version.  Most Americans make a version of spit pea soup that includes ham, carrots, and celery, with some versions adding potatoes.  It turns out many, many cultures have a version.  Many times, it’s very thick (Snert seems to be almost paste-like), because the peas are cooked until they are unidentifiable.  It is delicious and filling.  Most use ham or some type of sausage to add flavor.  The French Canadians use yellow split peas, instead of the green.  The French usually add thyme.  The Greek version (Aromatiki Soupa) sometimes uses dried fava beans or yellow split peas, sometimes adding cumin, oregano and/or lemon.  The Spanish version tends to add dry-cured chorizo and usually smoked paprika.  In Portugal, some versions add kale and sometimes choriço.  In Latin America the versions seem to add bell pepper and cumin and any number of different meats.  In India, they tend to add turmeric, curry powder, ginger and cilantro.  And the Lebanese version seems to include cumin, sumac, mint and quite a bit of parsley.  But, enough, already!!!  As you can see, there are almost as many versions as there are cooks.  Split pea soup seems to be a virtual melting-pot-soup, doesn’t it?

About the version—The Goddess was going to add ham hocks, but she decided against it.  You see, there are vegetarians among us these days and she realizes that this is not just something that’s going on in her family.  Sometimes, this can create issues and tensions, as the cook feels the need to prepare more than one meal.  This soup solves that problem; this works for both your vegetarian and omnivorous diners.  This recipe, as I made it, is actually vegan, if you use either water or vegetable broth—use the broth.  It’s just so much better.  So, instead of cooking the meat in the soup, I use it is as a garnish.  I must say, I think this may be the best pea soup I’ve ever made.  The flavors are sharp, not muddied by the meat.  The mushrooms add a very pleasant chewiness to the mixture, as well as flavor.  Full disclosure about the parsnips:  They were an afterthought.  I reached for the carrots and there were the parsnip just lounging around waiting to be used.  So why not?  It was one of those happy culinary accidents.  I will absolutely always add them from now on.  They add a hint of sweetness that is very pleasant, without being cloyingly sweet in any way.  But, the most important thing to prepare this soup successfully—do not over-cook the peas.  The soup should be vividly green, and over-cooking the peas tend to turn it grayish green.  This isn’t a smooth soup, and I don’t think it should be.  But, if you want smooth, then purèe it completely.  That’s up to you.

Green Split Peas Added to the Leeks and Celery Mixture

Broth Added to the Leeks and Peas

Adding the Spices to the Soup 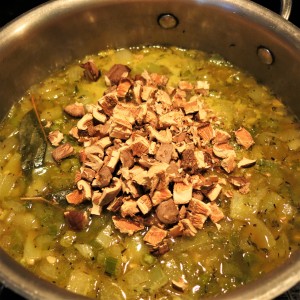 This goes together in a pot, just dumping things in, simmering until things are just done!  I cook the soup is two stages really.  The first stage is broth, dried peas, leeks (or onions), celery, bay leaves, broth and wine into the pot.  Simmer for about 20 minutes, then add the remaining ingredients and simmer until the peas are just cooked, but still have some texture.  Then, you can serve this as is or

garnish it with some bacon bits, ham or kielbasa cubes, fresh herbs, etc.

Place the dried peas, leeks (or onions), celery, bay leaves, broth and wine, in a large pot.  Bring to the boil; lower the heat and simmer until the peas are almost tender, but still not completely cooked; about 20-30 minutes.  Foam may develop as the mixture simmers; skim, as needed.

Add the remaining ingredients, including 2 cups of the additional broth; save the remainder to correct to the desired consistency.  Continue to simmer until the vegetables are tender and the peas are cooked completely through, but still retain some of their shape, about an additional 30 minutes.  Taste and correct the seasoning.  Ladle into bowls and serve, as is.  Or garnish with diced ham or kielbasa, crumbled bacon, or bleu cheese.  However you choose to serve, good bread is always a welcome accompaniment.

I like the Bleu cheese, too.  And though I haven’t tried it yet, I think a poached egg, plopped in the bowl, would be delicious.  And good bread…always good bread with soup!