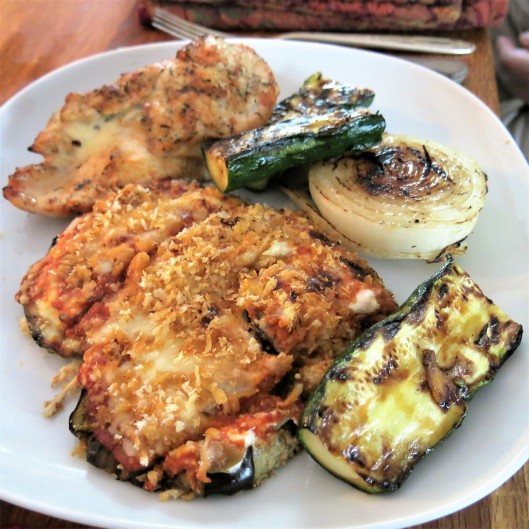 I love the idea of eggplant parmesan.  But, the problem for me has always been the breading.  It’s just too much.  It overpowers the flavor of the eggplant and I like that flavor.  So when I saw Grilled Eggplant Parmesan on the Food & Wine website, my light bulb lit right up!  This is isn’t much like their recipe (except for the eggplant), but I like Grace Parisi’s basic concept.  This is really more about grilling the eggplant and then assembling the eggplant parmesan, but I did actually “cook” it on the grill.  Technically, I finished it under the broiler, as I wanted the top to crisp up.  For the first try, I mixed crumbs with olive oil, then put half under the eggplant slices and the remainder on top.  The crumbs on the bottom were pointless, so in the later version I omitted that layer.  I toasted the crumbs, mixed with the oil, in a cast iron skillet and sprinkled them over eggplant, just before serving.  Much better!

First step:  I don’t salt really fresh eggplant anymore.  Particularly when I’m grilling them.  I love the peel; The Spicy Honey…not so much…this is about eggplant, okay!  As a compromise, I leave small strips of peeling and he’s okay with that.  I find if you peel it, it doesn’t hold up as well.  Heat the grill up and let’s get going here! 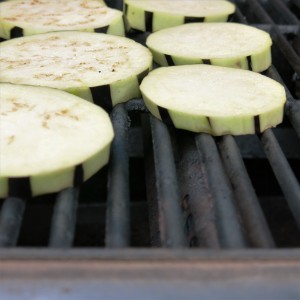 Brush the eggplants slices with some garlic-flavored olive oil.  You can use plain, but why not flavored?  Grill the slices until they are about 2/3 cooked through.  You may do this earlier in the day and just set them aside. 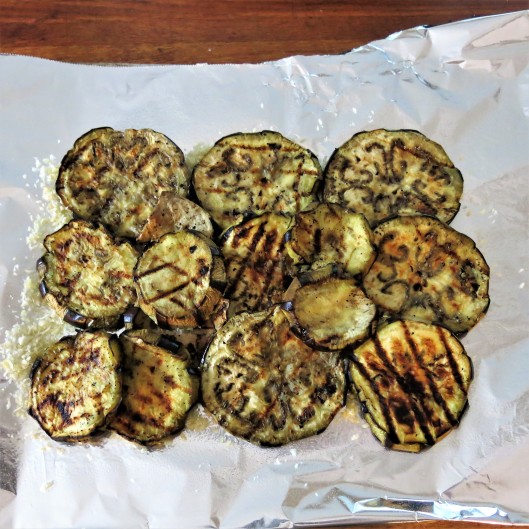 Plop dollops of the ricotta randomly, but more or less evenly, over the eggplant. 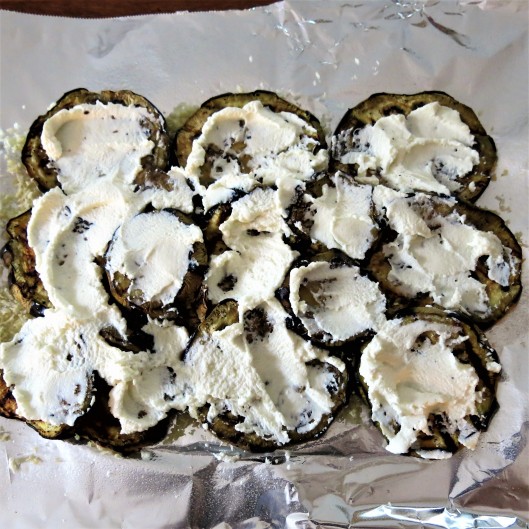 Use an off-set spreader to smear the ricotta in an even, thin layer. 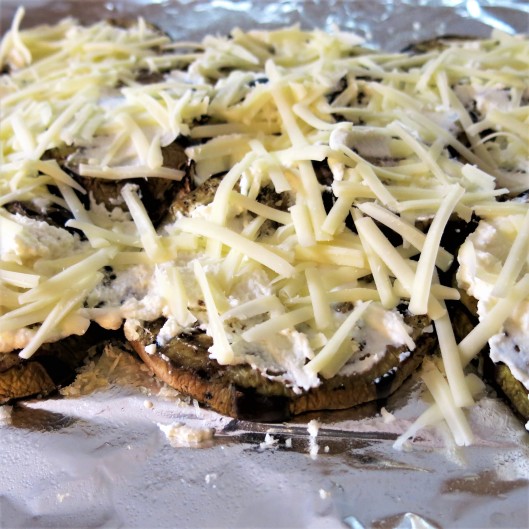 Sprinkle with half the mozzarella.

Do the same thing with the Stupendously Delicious Pizza Sauce (or pasta sauce of your choice).

Sprinkle with the remaining shredded mozzarella and all of the parmesan.

Heat the grill until are able to hold your hand over the heat for only a few seconds. 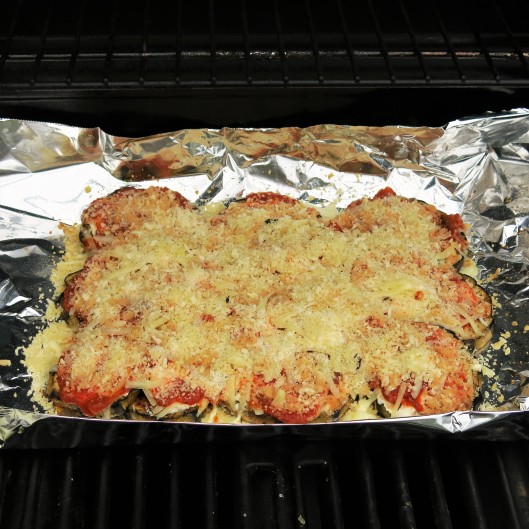 Slide the eggplant (on the foil) onto the grate.  Close the lid, lower the heat to about medium; cook for about 15-20 minutes, depending on the heat of your grill.  I turned the foil about half-way through cooking, placing the top edge, at the bottom.  There should be some bubbling around the edges.  When the eggplant is tender, pull the foil back onto the cookie sheet.  I found the cheese did not brown particularly well. 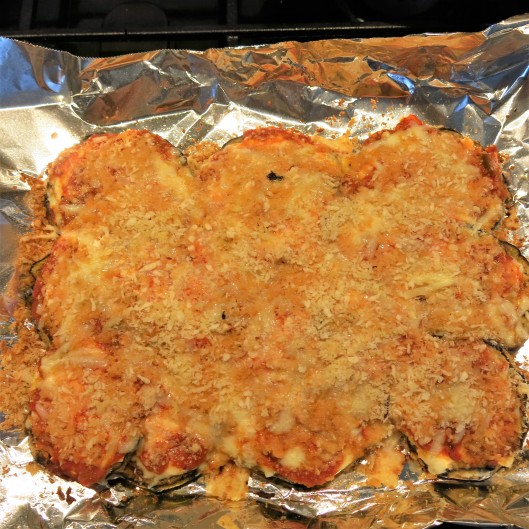 Broiling it for a very little bit solved that problem.  Sprinkle with the toasted crumbs; let stand for 5-10 minutes.  This allows the whole thing to set up for easier serving.  Also, you won’t remove the roof of your mouth!  You may cut it into squares, but if you use a spatula, you can sort of ease the slices apart.

Time-Saving Tip:  Combine an entire container with some oil, in the proportions given, and sauté as described.  When cool, toss them into a freezer bag.  Now, you always have them at the ready!

Cut the eggplant into just slightly less than 1/2-inch thick slices (a male eggplant will have less seeds).  Brush with olive oil, and sprinkle with salt.  Grill on both sides, until cooked about 2/3 the way through.  Set aside.

Combine the panko and olive oil, tossing until thoroughly coated.  Heat a cast iron (or other skillet) over medium heat.  Add the crumbs and stir constantly, or at the very least, frequently, until toasty brown.  Immediately pour the crumbs out of the skillet onto a plate to cool.  If you leave them in the skillet, the residual heat may cause them to burn.  Set aside.  This can be done several days ahead.

On a double sheet of heavy-duty aluminum foil, about 14X16-inches.  I placed the foil on a cookie sheet (without sides), then just slide it onto the grill.  Lay the eggplant, overlapping each slice just slightly, in rows…I found three slices down and four slices across, on the foil.  Leave at least a 2-inch edge all the way around.

Heat the grill until hot…you should be able to hold your hand over the heat for only a few seconds.  Slide the eggplant (on the foil) onto the grate.  Close the lid, lower the heat to about medium, and cook for about 15-20 minutes, depending on the heat of your grill.  I turned the foil about half-way through cooking, placing the top edge, at the bottom.

When the eggplant was tender, I slid the foil back onto the cookie sheet, sprinkled some of the “toasted” panko over the top.  Let stand for about 5-10 minute to let everything set and to cool slightly.  Cut into squares; it will more or less come apart by slices.  Serve.