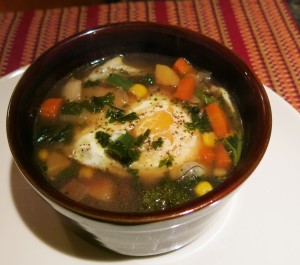 I know we’re supposed to be done with soups, but the snow is coming down by the bushel, there’s already 10 inches (25cm) on the ground and it’s still coming down.  Therefore,  being the benevolent Goddess that I am, I’m giving you 2, count ’em t-w-o, recipes today.  The first is yet another soup, but it’s nice and simple.  I have no idea why I called this Heathen Gypsy Soup…maybe because the ingredients in this soup would be readily available anywhere and would make it easy to prepare, given the nomadic qualities of the gypsy life-style.  Who knows on what level The Goddess’s mind operates (or doesn’t!)?  Anyway, I just ate a bowl for lunch and decided it was worth sharing after all.  It’s really just a good, straight-up vegetable soup.  You roast the vegetables (around the campfire where you are singing and dancing and doing other gypsy things…no stereo-types here, huh?), then make the soup.  Or better yet, use leftover roasted vegetables from last night’s dinner and cut the cooking time in half.  It’s a win-win either way.  The real key to this soup, is to simply use whatever vegetables you have lurking in your fridge. 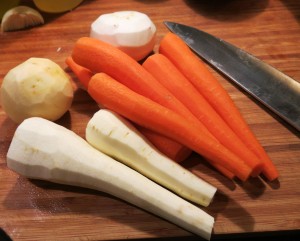 When I serve this, sometimes I add a poached egg to each bowl.  It’s wonderful to cut into the soft yolk and mix the yolk into the soup.  It adds a lovely richness and wonderful flavor.  If you’re not into soft-centered eggs; I’ve heard rumors there are those among us, then use hard-boiled eggs instead.  See, simple.

For veggies, I used carrots, parsnips, a white turnip and a yellow turnip, which I think might be a very small rutabaga, (which you could also use), some stems and fronds from a fresh fennel bulb.  Broccoli and onion are added to the pan a bit later.  The green beans and corn are added directly to the soup pot near the very end of cooking.

You want to cut the vegetables into about the same sized pieces so they will cook evenly.  This is what the veggies look like after they have been roasted.  If you want them to have more caramelization, broil them for a couple of minutes.  But, don’t walk away when broiling; it can burn too easily.

Preheat the oven to 500°F.  Put the soup pot on the burner; add the broths and parmesan pieces and bring to the boil.  Simmer for 5 minutes; remove and dice the parmesan, then return it to the pot.  Add the barley, and simmer for about 30 minutes; add the green beans and corn.  Continue to simmer, until the barley is just tender, but still slightly chewy, about an additional 8-10 minutes.

While the barley is cooking, toss the diced vegetables with the oil.  Place in a shallow pan, place the pan in the preheated oven and roast for about 10-12 minutes.  The veggies won’t be quite done.  Add the diced onion and broccoli; toss with the veggies and return the pan to the oven for an additional 8-10 minutes.  The veggies should be tender and slightly browned.  If not, turn on the broil and broil until the brown nicely, about 1-2 minutes.  Remove the pan from the oven; if the barley, beans and corn are done to your liking, toss the roasted veggies and whatever hot seasoning you choose into the soup pot; return to a simmer and cook for 2-3 minutes.  Otherwise, just let the vegetables rest until needed.

I add the kale at the very last minute (if using frozen, just toss it in; there’s no need to thaw it).  I let the mixture get very hot, almost boiling.  Taste and correct the seasoning.  Serve very hot, with a poached egg (or hard-boiled egg) in the bowl, some good, grated parmesan or Asiago cheese and nice bread or a sandwich on the side.

NOTE:  If you wish, you may thicken the soup slightly with an arrowroot/water slurry.  You may need to add additional broth, as the vegetables should be covered with liquid by at least 1 inch.  I use soup base to make the broth.  Feel free to change-up the vegetables and toss in a can or two of kidney or garbanzo beans…this is a great soup to make to use up leftovers and to just use what you have on hand.

Now a word about black barley.  Black barley is originally from Ethiopia.  There is very little intervention between the field and the table with this grain.  It is wonderful in soups, as it holds up well to long cooking, it retains it shape, has a pleasant, chewy texture and well, it’s just interesting.

The next thing to note, parmesan rinds.  I’ve mentioned these before, but you can see here that I added the rinds to water, in which I add soup base to make stock.  I’ve also mentioned this before, but I don’t purchase canned or boxed broths anymore.  I use soup bases from The Spice Mill.  I use a combination of chicken and beef base for this soup.  If you want to keep this vegetarian, use a vegetable (mirepoix) base.

After the rinds cook for 5 minutes or so, they become softened.  I dice them, add them back to the pot, put in the soup base and toss in the black barley.  Okay now, the stock and barley are simmering, the veggies are roasting and I’m going to sit down with a glass of wine and The Latin Lover.  We’ll chat for a bit and I’ll check on things now and then until I’m ready for the next step…putting it all together in the same pot!

Keep in mind that the choice of vegetables are what I had on hand, a mere suggestion.  Change them as you would like.  Add potatoes, regular or sweet potatoes, winter squash, kidney or cannellini beans, bacon, leftover chicken, ham or pot roast, add herbs (fresh or dried)…make this with whatever you’re feeling like eating.  I’ve made this with carrots, celery and onion only and it’s delicious.  It’s the roasting that makes the difference, I think.  See what you think.

I put a poached egg into The Latin Lover’s bowl of soup and made a grilled ham and cheese on the side.  I put the egg in the soup instead of in the sandwich!  I added chopped fresh dillweed to my bowl; I love dill…it’s a Goddess-thing.