We had leftover Pork with Salsa Verde, “Almost”.  You may remember Plan B?  That’s right, it’s leftovers, again!  It turns out The Latin Lover loved this more than the original, so The Goddess will go directly to leftovers.  Hmmmm, leftovers from scratch.  Now there’s a concept!  The nice thing about leftovers is the flexibility it offers the cook.  I used about 1 1/2 cups of the

leftover Pork with Salsa Verde, “Almost” to make this.  First, I sautéed some diced, frozen onion and about 1/2 cup of Hatch chiles.  I just added them frozen and let the fire do it’s magic.

I know I mentioned I found Hatch chiles frozen at Trader Joe’s.  Did I mention what a coup that was?  I did, didn’t I?  Anyway, I thawed the bag enough so I could divide it up into about 1/2-3/4 cup portions.  We don’t let them set out on the counter for a week, but just until they become slightly slushy. I think if may have taken about an hour.  Then, I tossed them back into the freezer.  That, by the way, is perfectly alright to do.  Your freezer won’t explode and you aren’t going to get sick.

Anyway, we have sautéed onions, Hatch chiles, hominy, cumin, and frozen corn, to which we add the leftover Pork with Salsa Verde, “Almost”.  Bring it to a boil, lower the heat and let simmer for about 5 minutes.  Then you can serve it.  I had a nice avocado and I julienned 4 corn tortillas, which I fried in a little oil until they were sort of crispy.  Let’s get to it!

That’s really all there is to it.  I am going to try this using one of those handy, dandy supermarket rotisserie chickens, torn into bits, with a little broth or beer, some ground cumin and garlic, instead of the Pork with Salsa Verde, “Almost”.

It took about 20 minutes from start to finish.  The Goddess, being the dexterous minx she is, had some freezer issues.  She opened the freezer door, and the ice cream came flying out onto the floor, then another bag of frozen veggies fell out of the freezer.  She bent over, picked up the errant articles, and when she was standing up, she smacked her head on the open freezer door.  This, as you might imagine, elicited no small amount of expletives that flew from her mouth and are still swirling around the room.  Anyway, by the time she got everything stuffed back into the freezer, which isn’t even that full, and she steadied her now throbbing head, it burned up some time.  You will probably have this done in 15 minutes or less. 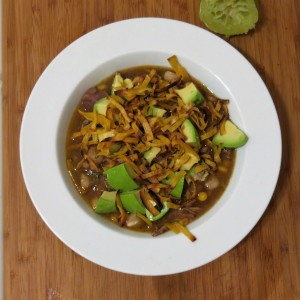 It was worth the bumped head.  It was that delicious.  Ahhhh…yes, I do so love leftovers!