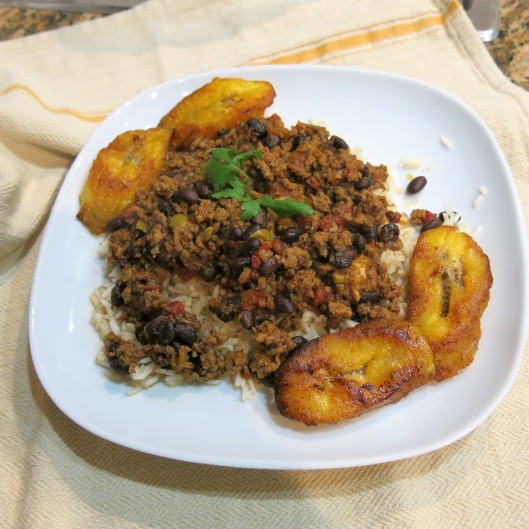 Picadillo is a favorite of The Latin Lover and the Progeny.  We like it a bit on the soupier side, because we serve it with or over rice and usually black beans and fried ripe plantains (maduros).  So The Goddess decided to throw caution to the wind and combine these flavors.  I mean, why not?Picadillo is best made ahead, which makes it a decent mid-week meal.  Make the picadillo over the weekend, chill it and then reheat it while the rice cooks. This is similar to the picadillo filling in the Pastel de Picadillo, but not quite the same.  Picadillo appears often on Cuban tables.  It is usually served with rice and black beans, with plantains on the side, either ripe or green. 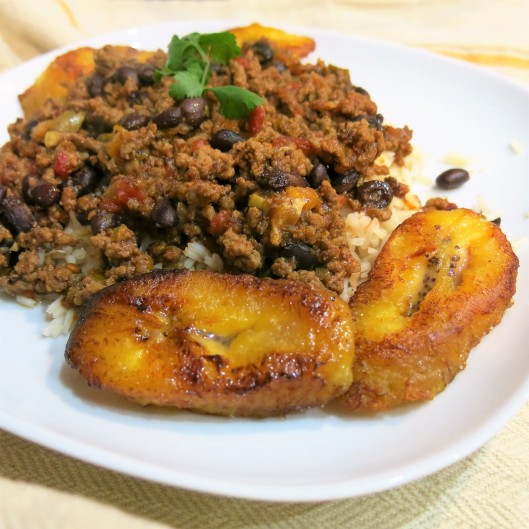 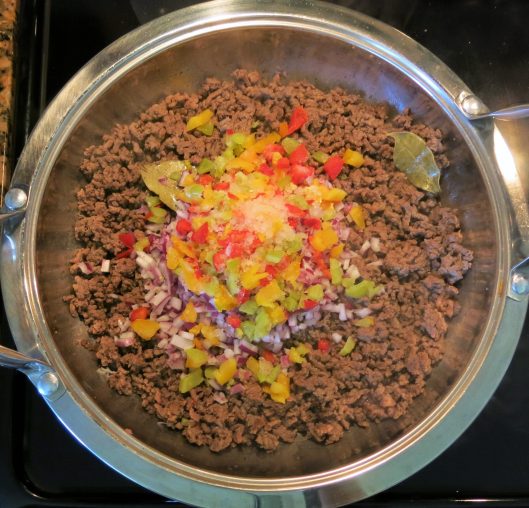 You’re just going to brown the ground beef, then add the onions, bell peppers and garlic to the mixture. 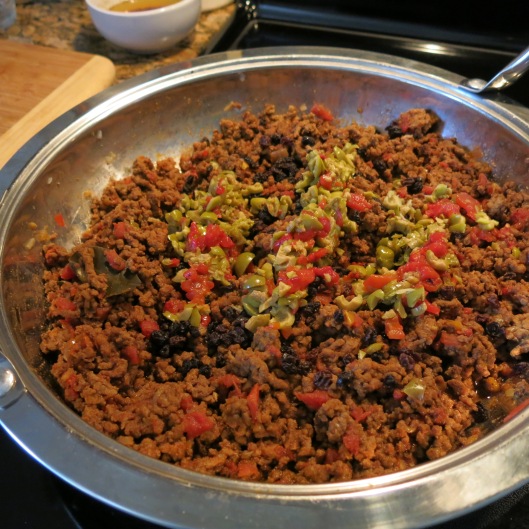 Simmer it briefly, then add the raisins, olives, tomatoes and spices.  Sauté the mixture together, simmer it briefly.  Now, you can serve it over rice or cool the mixture and pop it into the fridge for tomorrow’s dinner…don’t you just love that? 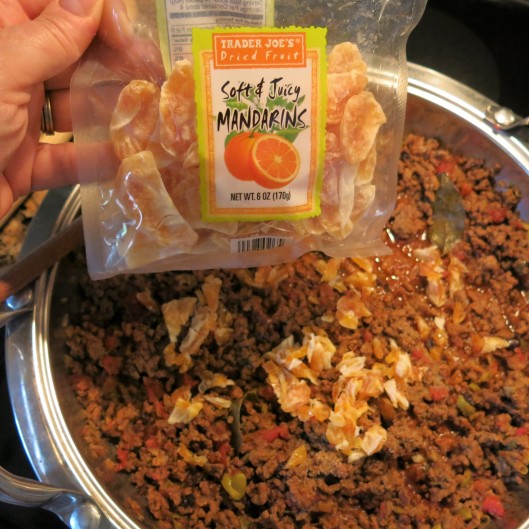 Except this time, I add some chopped, dried mandarin oranges, instead of the raisins and just because, I tossed in a small handful of dried currants. 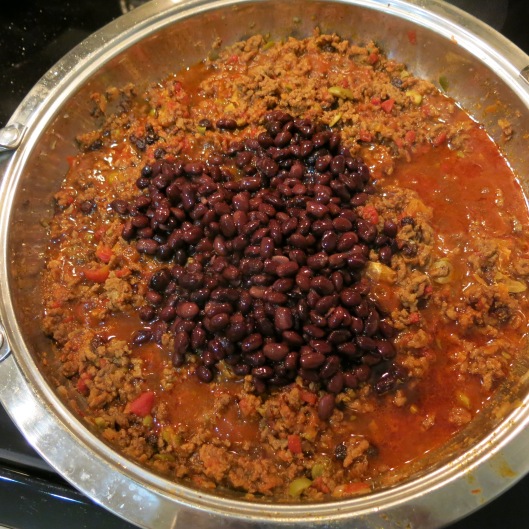 I also added the black beans directly to the mixture, instead of being served on the side.  You can see the liquid, and I don’t cook it down too much, so it’s saucy.  You know, just like The Goddess…she’s so saucy!

In large heavy sauté pan, add meat and break up using fork; stir in the onions.  Cook until the meat is browned, stirring occasionally, about 5-10 minutes.  Drain all but a couple of tablespoons of fat from the skillet (if you used lean ground beef, you probably won’t need to do this).  Add the white wine and deglaze the pan, scraping up the browned bits.  Simmer for 2 minutes to reduce the wine.  Add the remaining ingredients, using 1/2 cup of broth and reserving the beans, plantains, oil and cilantro until later; stir to combine. Cover and cook over very low heat for 15 minutes.  Stir in the beans, some or all of the remaining broth, if needed and the tomato paste; simmer for 5 minutes. The mixture should be just moist or just slightly soupy, however you prefer it.  Stir in the cilantro (if making ahead, add when you reheat the mixture) at the end of cooking; serve with/over white rice.  If not serving immediately, let cool to room temperature and chill.  This is best made ahead and reheated.  Can be frozen.

If you wish to serve this with the plantains (maduros), then heat at least 1/4-inch of oil in a heavy skillet, add the slices in a single layer.  Do not crowd; work in batches, if need be.  Sauté until the plantains brown slightly; turn and let cook until tender and lightly browned, about 2 minutes per side.  The cooking time may vary,  depending on the ripeness of the plantains.  Watch closely, lower the heat, if needed.  These can burn easily, because of their high sugar content.

NOTE:  You can add 1/2 teaspoon of cinnamon, if you wish.  It’s not our thing, but it is good.  I didn’t have raisins, so I added some whole currants and some diced dried mandarins (from Trader Joe’s).  They were terrific and I will absolutely do that again. Picadillo makes an excellent filling for empanadas.

That’s all there is to it.  It’s very simple, and doesn’t need to be watched too closely.  Don’t wander out in the garden or start to clean out a closet, because dinner may not turn out as planned or end well.  There may be copious amounts of smoke and quite possibly flames…not that I have any personal experience with that!  But, it is a great make-ahead dinner and I usually do that, whenever possible.

I won’t tell you this is “authentic” Cuban Picadillo, because I’m not Cuban and what does that word “authentic” really mean, anyway?  For example, when we were in Spain awhile back, I ate Spanish tortilla on about 8-10 different occasions, and I can attest to the fact that they were all absolutely delicious.  But no two of them tasted exactly the same.  So, let’s be careful throwing that word “authentic” around.  Make the food the way you like it and if you’re like The Goddess, you’ll change it up from time to time…that’s what makes life interesting.  Change is good!

This picadillo will actually become 2 different preparations.  It will be dinner, but I plan on leftovers, so I can make empanadas.  But that’s post for later!  I’ve been on an empanada kick recently, because anything you can eat with your hands is just soooo good!