I found a nice Asian market here in South Florida.  I love Asian markets with their offal, their weird and wonderful fish and shellfish and their greens.  I love their greens.  I was thrilled to discover Chrysanthemum leaves or Tong Ho.   It was a rainy, nasty evening when I returned home.  It wasn’t cold, but it was nasty and it had rained all day.  The Spicy Honey was traveling, so it was just going to be dinner for one…me.  I always pick up some ramen noodles when I explore Asian markets and today was no different.  So, I decided that I wanted soup, but I didn’t want to spend too much time, as shopping is tiring business and The Goddess was tired. 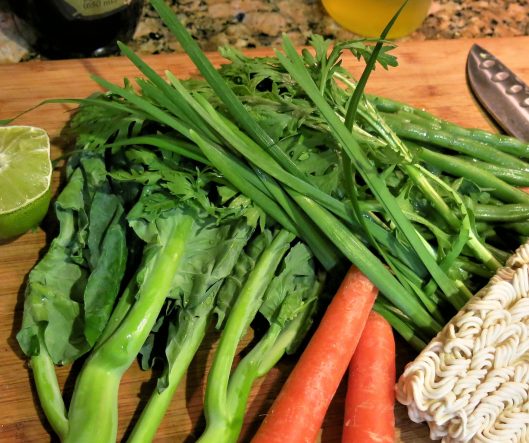 I had gotten Chinese broccoli or gai lan (on the left) and garlic chives or jiu cai (just above the carrots), which I love, and Chrysanthemum leaves or tong ho (tucked under the chives), which were new to me.  The man at the store told me his mother adds them to soup, but at the last minute and they use them raw in salads, too.  Gai lan is an old friend of ours, as is jiu cai.  Gai lan, is simply Chinese broccoli—almost no florets, but huge amounts of leaves and stems.  It has a sweetness and is less pungent than the “normal” broccoli.  Jiu cai, is simply chives, but meatier, moister, larger and with a decidedly garlic flavor.  You’ll find them in dumplings, stir-fry and soups.  So, soup it would be.

Now, let’s not be a snob about ramen noodles, okay? I do think some are better than others, but what it’s really about for me, are the things you add to the ramen, the noodles themselves are more or less the same. Also, those flavor packets can offer quite an array of flavors or just plain salt.  I’ve made ramen for you before, but this is a different version.  This version is all about the greens.  Okay, there were a few shreds of pork from a pork roast earlier in the week (remember how The Goddess loves her leftovers?) and a good bit of shredded fresh ginger.

I really like ginger, which I toss in the pot, then the broth, garlic and lemongrass.  Bring it to a simmer, add the ramen “brick”.  Bring the pot back to the simmer and using a chopstick, finagle the noodles apart.  Add the coarsely shredded carrot and sliced gai lan stems.  Simmer for 2-3 minutes.

Toss in the gai lan leaves, the scallions and simmer for 1 minute.  You’re almost there…now, toss in the frozen peas, the cooked pork (or leave it out completely and go vegetarian), and the tong ho.  Turn off the burner, cover and let the mixture stand for about 2 minutes.  Stir in the sesame oil and a good squeeze of lime juice. 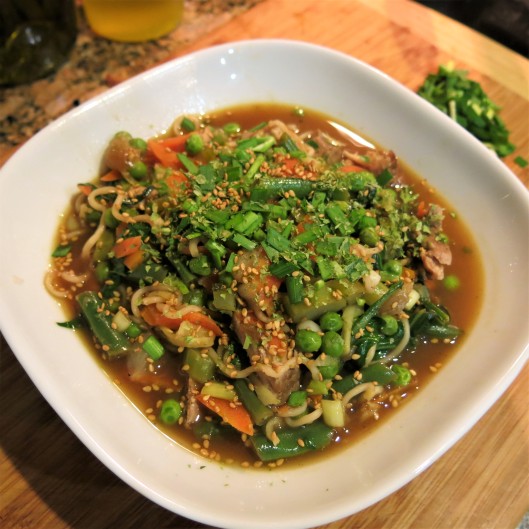 Serve, topped with the jiu cai, sesame seeds and a good squeeze of lime.

I did add a shredded carrot and some chopped green beans, as this was a decidedly vegetable-forward version of ramen and as you can see, not too brothy.

Ramen with Chinese Greens and Ginger

Place the ginger, lemongrass, garlic and broth in a large saucepan.  Bring it to a simmer, add the ramen “brick”.  Bring the pot back to the simmer and using a chopstick, finagle the noodles apart. Add the flavor packet, coarsely shredded carrot, green beans and sliced gai lan stems. Simmer for 2-3 minutes. Coarsely chop the gai lan leaves; toss in the gai lan leaves and scallions; simmer for 1 minute.  Toss in the frozen peas, the shredded, cooked meat (or leave it out completely and go vegetarian), and the tong ho. Turn off the burner, cover and let the mixture stand for about 2 minutes. Stir in the sesame oil and the lime juice. Serve, topped with the jiu cai and sesame seeds.  Serve hot.

NOTE:  If gluten is an issue, use rice noodles instead of the ramen.  Use GF tamari, and a bit of rice wine vinegar instead of the flavor packet.  A bit of GF hoisin would be a nice addition, too.  Use whatever greens you have.  They can either be fresh or frozen.  I always have some frozen lemongrass in my freezer.  It works well and adds a really nice citrusy flavor to dishes.

This is sort of a blank slate, but the Chinese greens were very tasty.  The tong ho has a nice fresh, “leafy” flavor and tastes just slightly bitter, but pleasantly so.  I do think it’s important not to cook the tong ho much.  When I reheated the mixture the next day, the tong ho was a tad slimy and mushy.  But, this mixture worked and was really delicious.  It hit the spot.