Parsnips are one of the things I always look forward to when autumn rolls around.  Beef Barley Soup just isn’t as good without a parsnip.  Neither is a good beef stew.  I know it’s spring and it’s the end of the parsnip season, but think of these little discs of goodness as the last parsnip hurrah! 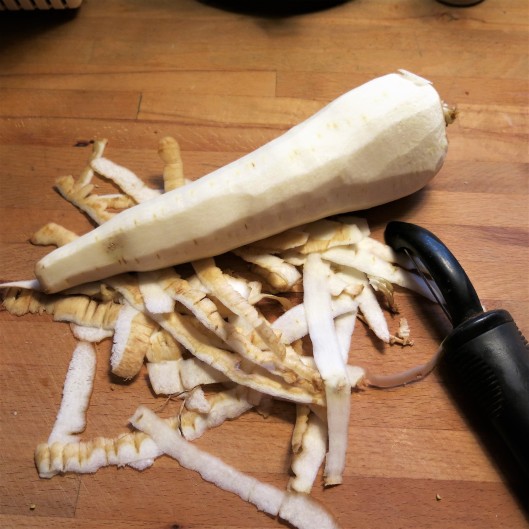 I always have a parsnip in the crisper drawer.  They somehow tend to float to the bottom of the draw and sometimes I forget about them.  I can’t be the only person this happens to, can I?  But, not this time.  Parsnips are sort of an old-time veggie and there are way too many people who don’t seem to cook with them or even know about them.  That’s a shame, because they are so very good.  Usually they are mashed, roasted or braised.  But, because parsnips have a similar consistency to a potato, with less water, I thought they should work fairly well for “pancakes”.  They did.  The “batter” went together quickly.  They were delicious hot, at room temperature, and you know, for breakfast! 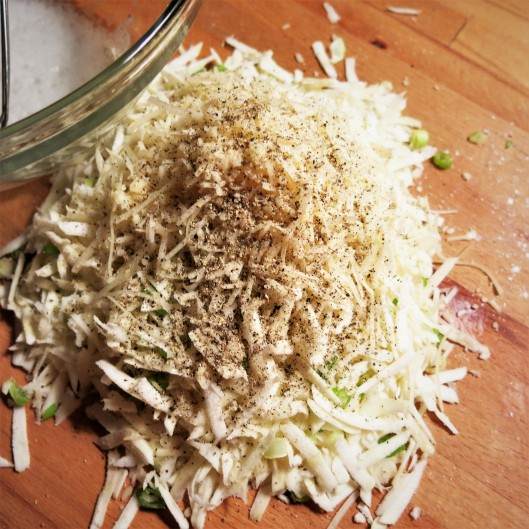 Peel and shred the parsnip and toss them with the “dry” ingredients, including the scallions.

Beat the egg, water and lemon juice together; dump the parsnip mixture into the bowl and mix it all up.

Place a skillet over medium-high heat, add a little oil, a dollop of the mixture, flatten them out and fry until the pancakes begin to crisp and brown, about 2 minutes, then flip it over and cook until browned and tender, about 1-2 minutes.  You can keep them warm in a 200°F until you finish making all the pancakes.  But, don’t keep them more than about 20 minutes.  Actually, they were really good at room temperature, too.

We ate them as a side with pork chops, and a dollop of Creamy Horseradish-Mustard Sauce, apple chutney, sour cream.  These crispy little discs would make a nice appetizer, could be nice served with a salad and as I mentioned before, make a nice little breakfast treat with a drizzle of maple syrup.

Grate the parsnip on a medium grater; you should have about 3 cups.  I grate them right on the counter.  Add the scallions, cheese, rice flour, pepper and salt and garlic granules; toss together until well combined.

In a medium bowl, beat the egg, water and lemon juice together.  Dump the parsnip mixture into the bowl; fold it together until the mixture is evenly mixed.

Heat a skillet over medium-high heat.  Add a thin skim of oil.  Drop heaping tablespoons of batter into the pan; flatten to form a thin pancake.  I put about 4-5 in the skillet.  Fry for about 2 minutes, until the mixture is browned.  Turn and continue to fry until done, about 2 more minutes.

Remove and serve immediately or keep warm in a 200°F oven for no more than 20 minutes.  Serve with apple chutney, sour cream or as is.