I love fennel.  I love it raw, but when it’s roasted or sautéed…mmm…it’s just superb.  So many times I’ve heard people say they don’t know what to do with fresh fennel.  This is a perfect marriage…fennel and apple.  There’s no fighting here! 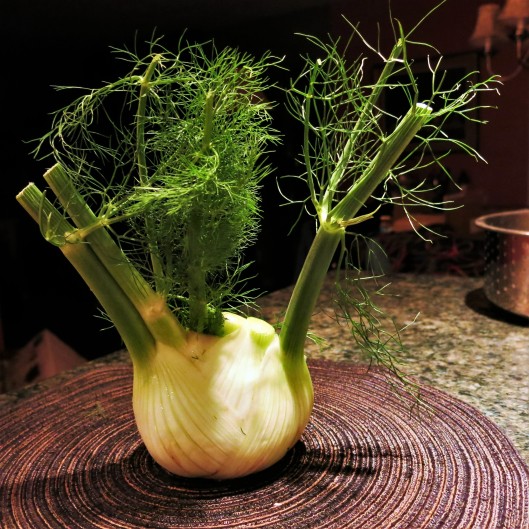 As I said, I love fennel…raw, sautéed or roasted.  Besides, it’s a pretty plant, isn’t it?  I think many of us associate fresh fennel with fennel seeds, and obviously the flavors are similar.  But fresh fennel is so much more delicate, especially when it’s roasted or sautéed.  Fennel lends itself well to such preparation, and if you choose to sauté it, it cooks rather quickly, so it can be part of your mid-week meal.  In the past, I’ve posted Provençal Tomato, Fennel and Squash Gratin, as well as the Corvina with Fennel, Orange and Onion, the latter being pretty similar to this mixture.  But, no orange here.  I was being a good little Goddess and not subjecting everyone to my ever-present orange addiction!  However, I did think some orange would have been nice!  Don’t pitch out those fronds.  I add them to this mixture, toss them into salads or put them in the freezer, for later.  Fennel is wonderful added to soup, like Tomato, Corn and Fennel Soup. 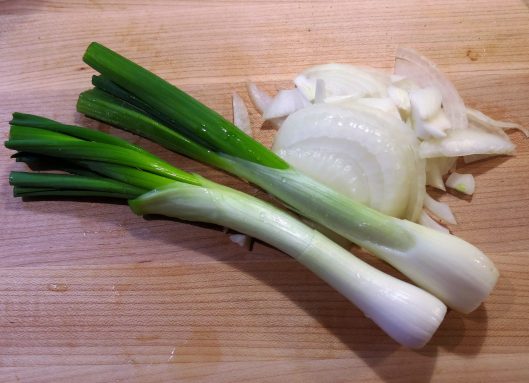 I used spring onions, which are pretty much scallions, but with larger bulbs.  I used those, because I found some at the farmer’s market.  Otherwise, I would have used a sweet onion.  (See the tip below, about cutting onions.)  I don’t know that spring onions actually taste better or different, but I just like them. 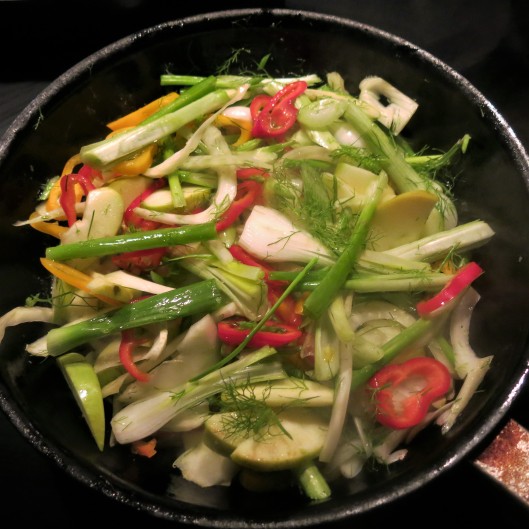 I don’t have a ton of pictures for you, because you throw everything, except the apple slices, into the hot sauté pan with some oil, then sauté for about 2-3 minutes stirring every now and then, until the fennel is about half-cooked.  Then, I add the apple slices and cider, give it a good stir and cook for about 1 minute. 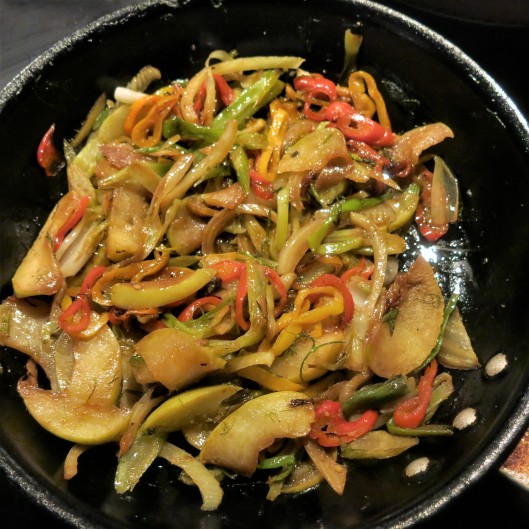 Pull the pan off the heat and let everything stand for a couple of minutes; stir and serve!  Done!  That’s it!  As the Barefoot Contessa says, “How easy is that?”.

Place the sliced fennel, spring onions, peppers and apple slices in a medium-sized skillet; drizzle with a couple of tablespoons of olive oil.  Toss; sprinkle with salt and pepper; toss again.  Sauté over medium-high heat, until the apple just begins to wilt, about 4 minutes.  Toss the veggies occasionally, making certain the apples don’t stick to the skillet.  Sprinkle with the garlic granules and pour the apple cider over the veggies.  Continue to cook for about 30 seconds.  Remove from the heat source, taste and correct the seasoning.  Serve immediately as is, or with shredded parmesan.

And fennel is wonderful with salmon.  I served Slow-Roasted Salmon with an Orange-Maple Glaze (oops…there was orange after all!) on top of our mélange of sautéed fennel and friends.  It was a nice combination.