The original Cuban Ham Dip is delicious.  It is.  But, it’s evolved.  The Latin Lover likes the evolution.  He thinks it’s even better than the original.  It still has a smoky, sweet-sharp flavor, and it’s still creamy and robust.  But, it’s more complex.  It makes a great sandwich.  Or maybe a Super Bowl slider?  Since we’re here in Paradise, i.e. South Florida, “bocaditos”, which in Cuban-speak, loosely translates to “small bites”.  They’re really just finger foods, but when you say “bocaditos” here, little sandwiches (more or less sliders) made from soft, little rolls spread with Ham Dip, come to mind.   You can purchase little pre-made sandwiches in every bakery or bakery department in supermarkets, as well as the pre-made spread alone.  And they’re good.  But, the pre-made spread isn’t as good as this (she says modestly!).

Some of the changes—I now use bread and butter pickles instead of relish.  We like the flavor better.  I use three hams, smoky, sweet and off-the-bone ham.  I add more roasted red peppers and some Worcestershire sauce, too.  And most importantly, ballpark mustard.  It’s soooooo much better than Dijon.  You won’t hear me say that often, so make note!

Cut the hams into large bits; put in the bowl of a food processor and pulse, scraping the sides 3 or 4 times, until the hams are finely “ground”.  Using a spatula, mix up the cream cheese, which needs to be at room temperature.  Also, I usually use the lower-fat cream cheese. 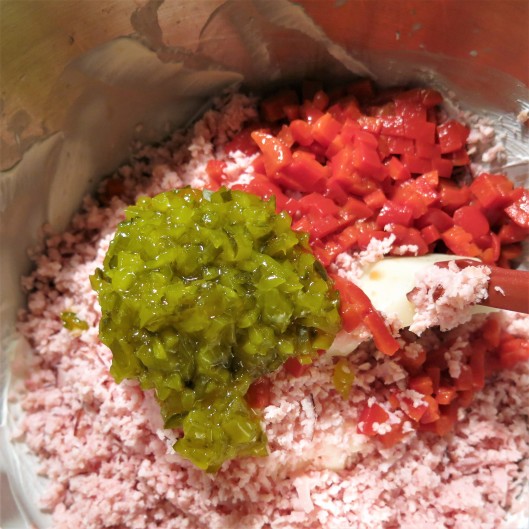 Now, just put everything, but the roasted peppers, on top of the cream cheese.  You can’t see the onion or the cream cheese, as it’s underneath the ham.  Start with the lesser amounts of the ingredients given.  Stir everything together until completely combined.  Now, add the finely diced peppers.  I know you’re seeing those peppers right there in the mix, aren’t you?  These are pictures from the past…which is obviously checkered!  But, now I stir them in last.  Now comes the best part…taste it.  The mixture should be slightly sweet, but with a relatively sharply bite.  It will taste differently tomorrow, once the flavors meld and mellow overnight.

Scrape the mixture into a container, cover and chill overnight.  The mixture should be spreading consistency, but if it seems too thick, add 1-2 tablespoons milk.

I think I mentioned, when I previously posted the Cuban Ham Dip recipe, that I hadn’t written the recipe down.  And I still haven’t.  But, I seem to be making it more frequently these days.  We’re eating lighter in the evening.  And The Latin Lover, likes to have one of these sandwiches for dinner, along with some fruit, and then he calls it a day.  This is perfect.  He’s happy and I can have it on hand, because it keeps so very well.

Remember…you need to make ham dip ahead of time, which still makes it perfect for entertaining.

*Save the juice, as it’s very good to use as part of a vinaigrette.

Bring the cream cheese to room temperature.  Cut the hams into large bits; put in the bowl of a food processor and pulse, scraping the sides 3 or 4 times, until the hams are finely “ground”.  Set aside.

Place the room temperature cream cheese in a large bowl.  Drop the ground ham in.  Stir in the remaining ingredients (I use a spatula for this), except the roasted peppers, until well combined.  Use the smaller amounts given, to begin with.  Add the finely diced roasted peppers; gently fold them into the mixture.  Taste.  The mixture should be slightly sweet, but with a relatively sharply bite.  It will taste differently tomorrow, once the flavors meld overnight.  Scrape the mixture into a container, cover and chill overnight.  The mixture should be spreading consistency, but if it seems too thick, add 1-2 tablespoons milk.  Serve, smeared on potato rolls, party rye, on bland or Cuban crackers or a dollop on a bread and butter pickle slice.  It’s good, eaten with a spoon, standing over the sink!