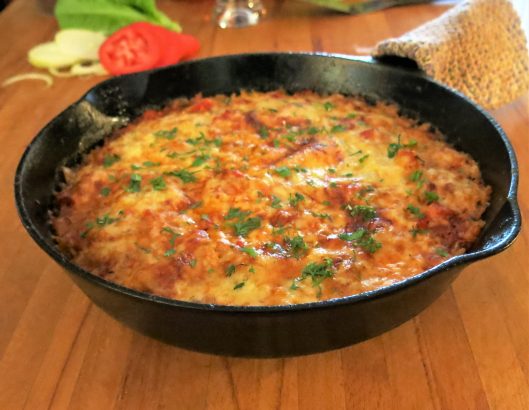 This rice is along the line of the everyday rice many Mexican cooks prepare.  And it’s good.  It’s really delicious.  But, it’s so much more, because once you capture the basic, there are so many, many different flavor roads to travel down.  Think of this as just the beginning of your culinary journey.  I usually make more rice than we’re going to eat at one sitting.  There are so many things to do with leftover rice, and it reheats well.  But, this recipe is a reason alone to have leftover rice…I have mentioned my love of leftovers, haven’t I?!?!?  This version leans pretty far into the Mexican culinary corridor, but as you might imagine, this house has many corridors!  The main ingredients for the “basic” version are:  onion, garlic, diced tomatoes, tomato paste, cooked rice and cheese.  Technically, you can omit the cheese, but come on…why would you commit such an egregious error?  It’s cheese, people!  So you can prepare the basic, more Mexican-style, like this recipe.  Or you can omit the cumin, oregano and smoked paprika, and wander into other cuisines, such as—

This is just a starting point and these are just suggested possibilities.  I usually don’t put cheese in the rice, but rather on top of the rice, as I want it to be crispy.  This is a great way to use up that errant 1/4 cup of cheese that’s floating around your fridge.  You can usually toss on most cheeses.  I did use a bleu-veined cheese once, but I found the flavor a bit funky…tomatoes and bleu-veined cheese, when heated, didn’t work well together.  You may also really crisp up the cheese by kicking on the broiler.  I prefer not, but that’s my preference.  And some cheese do better under the broiler than others; hard cheeses tend to perform best.  Some of the cheeses I mentioned are a bit difficult to find in certain areas, so use what you have.  Every time I say that, I always think that’s the culinary equivalent of “Love the One You’re With”.  Anyway, another very positive attribute of the dish is its reheatability.  I really do think it may possibly be even better reheated.  I have served the version I’ve given here, for brunch.  It is wonderful with fried or poached eggs on it.  You my add diced ham to the rice, though I prefer to have the ham on the side.

To prepare our lovely side dish, 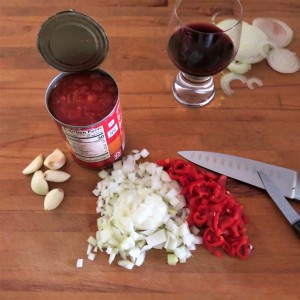 heat the olive oil in a heavy skillet (I love cast iron for this-about a 10-inch), sauté the onions and peppers, letting them char just a bit, if you have time.  Deglaze the pan with the wine. 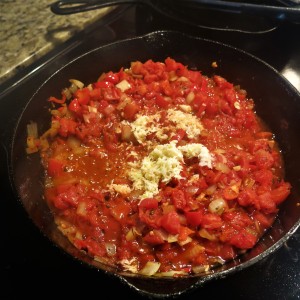 When it’s almost completely evaporated, add the tomatoes, tomato paste, spices and herbs.  Give it a good stir and let this simmer for 3 or 4 minutes.  Add the grated garlic.

Stir the rice in.  The mixture should be slightly soupy, because some of the liquid will be absorbed into the rice and some will evaporate.  But you don’t want it too much.  I know that’s a ridiculous statement, but you’ll find your path the more you cook this.  Don’t worry.  If it’s a bit too soupy, it’s still very delicious.  I usually turn on the oven to 400°F before I start cooking.  Remove the skillet from the heat.  If you’re not using this pan in the over, then pour into the dish you’re putting in the oven, 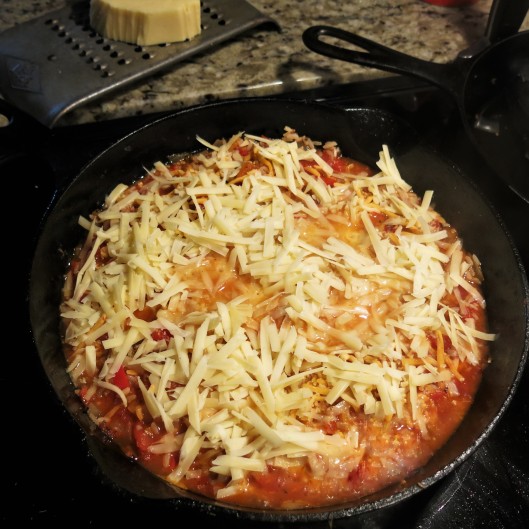 smooth the top a bit and sprinkle the cheese over.  I usually toss all the cheese together, but do whatever works for you.  I have placed slices of fresh mozzarella over the cheese, then topped with shredded cheese.  Slide the skillet/dish into the oven; let it bake for about 15 minutes or until the mixture is bubbly and

the cheese is melted an slightly browned.  If you want this to be crispy, kick the broiler on (make certain you baking dish is broiler friendly) and broil for a few minutes…do NOT walk away from the stove…until the cheese is very brown and crispy.  Remove the the oven and let stand for at least 10 minutes, sprinkle with cilantro and spoon onto your plate!

Heat a skillet (cast iron preferred) over medium-high heat.  Add the oil and sauté the onions and peppers until wilt.  Let them pick up a bit, but only a bit, of char.  Lower the heat and deglaze the skillet with the wine.  When the wine has almost evaporated, add the diced tomatoes, tomato paste, dry herbs, spices and garlic.  Stir to combine.  Simmer, uncovered, for about 3 minutes.  Add the cooked rice; stir to combine.  Taste and add more salt, if needed (see TIP).  Return to the simmer.  Remove from the heat.  Smooth the top a bit.  Sprinkle the cheese evenly over the rice, going completely to the edge.  The idea is to have the rice completely covered.  Place in a preheated 400°F oven.  Bake for about 15 minute or until the mixture is bubbly and the cheese is melted and slightly browned.  Remove from the oven; let stand for about 10 minutes.  Sprinkle with fresh cilantro and served.

NOTE:  You may change the herbs and spices to accommodate whatever flavor profile you’re looking for.  Change the cheese to what you have on hand and prefer.  Cheddar and Swiss are always good options, but I usually add some Parmesan.  If you prefer the cheese to be crispy, broil the dish for several minutes.  Dry cheeses tend to crisp best.

TIP:  I like to correct the salt level in dishes, by adding some powdered soup base—chicken, beef, tomato or vegetarian.  You get the salt, but also a nice addition of flavor, too.  It’s a win-win.  This applies to almost everything savory you’re cooking.

1 thought on “Cheesy Rice with Tomatoes, Onions and Garlic”