The Spicy Honey loves his mushroom soup.  Usually, he’s happy with the canned stuff, but this is so simple to make; it is really soooooo delicious.  I thought I probably should share the recipe.  Because, you need to make this.

This is goes together reasonably quickly.  If you don’t have dried mushrooms, get some.  They add both texture and depth of flavor to this soup (as well as stews), but they need to be reconstituted. 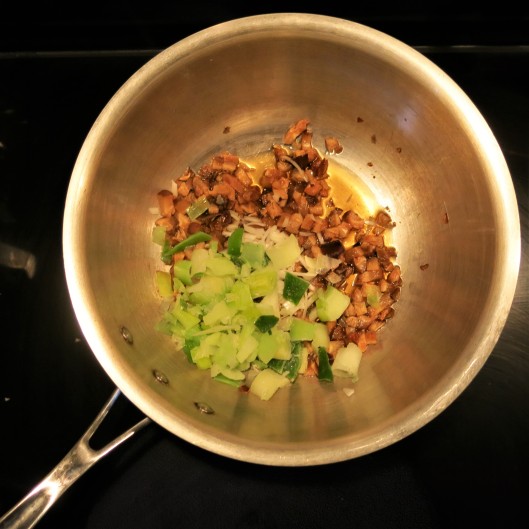 I just put them in the bottom of the pan and add the first amount of white wine.  Bring the mixture to a boil; remove the pan from the heat and set aside for about 15 minutes.  They will absorb most of the liquid.  These are reconstituted, but I tossed the leeks in on top, so you’re going to have a bit of trouble seeing the mushrooms.  Sorry about that.

When the mushrooms have softened somewhat and the liquid is almost absorbed, add the butter and the leeks to the pan.  Simmer for a couple of minutes. I like to dice about half of the mushrooms and

Stir the soup base, thyme leaves, porcini powder and garlic granules into the mixture, until the base melts. 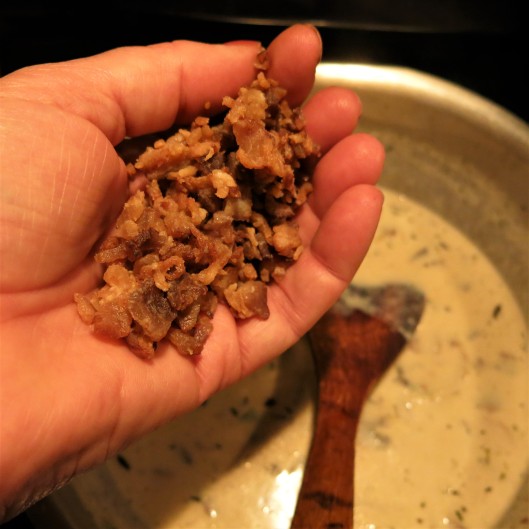 You’re almost there…just stir in lemon juice, then the bacon bits and taste.  If you need to add salt and/or more lemon juice.  Pour about 1 1/2 cups into a nice bowl, sprinkle with some snipped chives and lots and lots of freshly ground black pepper.  Don’t skimp on the pepper, because the pepper really does just make this bisque soar.  Eat while it’s hot!

In an 8-cup saucepan, reconstitute the mushrooms in the white wine.  Bring the mixture to a boil; remove the pan from the heat and set aside for about 15 minutes.  Add the butter and the leeks; simmer for 2 minutes. Dice about half of the mushrooms and thinly slice the remaining mushrooms.  Continue to sauté for about 3-4 minutes of until the mushrooms release their liquid and become limp. Drop the soup base, thyme leaves, porcini powder and garlic granules into the mixture; stir until the base melts.

NOTE:  If you use fresh leeks, make certain they are free from grit.  In a large bowl of cold water wash leeks very well.  Drop into a colander to drain well, before proceeding with the recipe.  You can brown the mushrooms, but I usually don’t worry too much about that.  Though the porcini powder is optional, it gives this soup a wonderfully complex depth of flavor.  For a lighter soup, omit the soup base and use 5 cups chicken broth and increase the heavy cream to 1/2 cup.

You can be adventuresome and add some crumbled bleu cheese.  I usually omit the bacon and add a couple of tablespoons of sherry when I use the bleu cheese.  You’ll probably want to serve this in smaller portions, as the bleu cheese makes it richer.  The Spicy Honey likes to have a grilled ham and cheese.  It’s pure comfort.